The MMA Diaries: SCC 2.0 and the unfortunate state of MMA in Ontario

Bloodyelbow.com’s Karim Zidan returns with the second edition of “The MMA Diaries.” This time we go through the deplorable state of Ontario MMA following last week's Substance Cage Combat event in Toronto.

Share All sharing options for: The MMA Diaries: SCC 2.0 and the unfortunate state of MMA in Ontario

I arrived at the arena with fellow reporter Shawn Smith after a hearty lunch in preparation for SCC 2.0 and the night ahead. The sea of Tapout and No Fear shirts shrouded in a cloud of cigarette smoke less than a 100 meters away verified that we were undoubtedly in the right place.  It was comforting to know that even a young sport such as MMA has established its own traditions - even if those customs make you shake your head in dismay.

Having not received any press emails leading up to the event, it was hard to understand exactly what was going on from the start. We were not aware of the exact start time of the event, and by the looks of the staff when we arrived, neither did they. Several of us texted back and forth ahead of the evening's fights, and established that it may be best to arrive before 7pm ET (Fight Network had 7:30 as the start time for the event).

A sign taped to a back door read "Fighter/Media Entrance," and we followed through, curious as to what we would find inside. A fold-up table with a cardboard box of press passes on top was positioned to one side. Once a staff member took notice of us, he rushed over, asked for our names, and entrusted us with the passes without even asking for identification or the outlets we wrote for.

Before I could ask for a program of some sort, the same staff member hollered to the first security member in the vicinity to "take these guys to - you know - the penalty box."

The staff member was certainly not joking when he referred to the penalty box, as I quickly realized that the section allocated for media members was actually the penalty box in an ice hockey rink.  No attempt had been made to mask the lack of care that the promotion showed the media, as nothing was present inside the box expect for a single bench that could barely seat half the press. Luckily, it seemed as though most had anticipated this sort of difficulty, and came with minimal equipment. Some chose to live tweet with their phones, while other simply enjoyed the show and awaited opportunities to conduct post-fight interviews. While there was WiFi in the arena, none of the staff members we asked had any idea what the password was. Those who wished to remain in contact with the outside world needed to use 3G connections on their smartphones instead.

Curious to understand the bout order and complete list of competitors as well as their records, Shawn went on the hunt to find a program since the staff chose to ignore our request. I was surprised when he returned a few short minutes later with a small booklet filled with the necessary information. When I asked if the staff had finally obliged, he replied, "No, I found this on the floor."

While we originally expected the fight card to begin at 7:30pm, the arena maintained an overwhelming blue hue due to the lighting, as well as a thick layer of smoke until 7:45, at which time the lighting returned to normal and the announcer revealed that the fight card would begin "shortly." 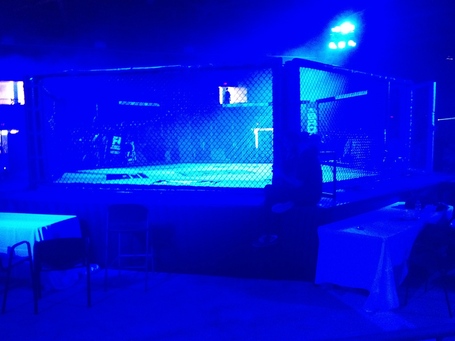 The crowd was a disastrous blend of "just bleed" fans and fight camp loyalists, there simply to act as a cheerleading squad for their friend/training partner. Occasionally, I would take note of a group of females, armed with Gucci bags, staring uncertainly about the violence in front of them. One was particularly appalled in the third fight, when Abdula Teymuri scored a TKO win and proceeded to face the camera and double fist his own face with his tongue sticking out.

Of course, no MMA crowd would be complete without the customary drunkards shouting slurred buffoonery at the fighters in the cage, and Friday night's SCC 2.0 was no different. Luckily, I was unable to catch much of it, as our "press section" was barely situated in a location that would allow for clear vision, let alone hearing.

The pointlessness of our cherished media section was not evidently clear until a six-year-old and his father, who must have assumed that we were a group of VIP fans who booked the penalty box for the fights, joined us as silent companions at the end of the bench. The youngster enjoyed his popcorn from "Cittadelle," and took little notice of much else. His father stood behind him casually, and occasionally mimicked a fighter squaring up his shoulders for no apparent reason.

After a 15-minute intermission halfway through the card, the crowd finally came to life during the Woolley vs Saudino fight, as Saudino out-struck the local fighter with vicious combination, including multiple knees in a Thai plum, in the early stages of the contest. While the remainder of the fight was slower paced, it was the only bout on the card that reminded me that I was supposedly there to review the fights and not solely on my surroundings.

Shortly afterwards, fans were treated to a unsavoury contest that featured Todd Stoute, a fighter who was accused of kidnapping, sexually assaulting and then throwing a teen into a garbage dumpster on June 26, 2004. Not only was a convicted rapist fighting on the promotion's main card, he was welcomed wholeheartedly by the crowd in attendance, as they cheered enthusiastically while he walked out to the cage.  It was...disappointing to say the least.

Although Stoute had the support of the crowd and TUF winner Elias Theodorou in his corner, he still lost a lackluster unanimous decision, which will likely send him tumbling further into obscurity.

The MMA Diaries: Musings from Bellator 119

The MMA Diaries: Musings from Bellator 119

Once the fights came to a close, the credentialed media was left to wallow about in a confused state. No PR people were there to lead us to the backstage area, so I chose to gravitate alongside the scribes who seemed familiar with this type of situation. It appears we were to take a separate exit to a backstage area, where cameras and equipment was set up to interview the fighters as they came out of the locker room. None of this had been explained to us beforehand, but the security with magnificent whiskers did not seem bothered when we walked past him to the backstage area.

One of the first fighters to arrive was Jeremy Osheim, who had defeated the aforementioned Stoute earlier in the night. Adam Martin approached him for a quick interview, and was taken aback when Osheim mentioned, a little too casually, that Stoute had tried to tap into his best Mike Tyson impression and take a chunk out of his ear.

"Ya man, he just bit my ear while we were up against the cage," Osheim said with a slightly amused look of disbelief on his face. "The ref saw it and said 'none of that' but that's it."

The next fighter we saw was EJ Brooks, who lost a split decision to Alex Ricci in the main event. He approached our little corner with a look of unabashed skepticism, shrugged his shoulders and said, "I can't take my grandma down without my feet!" making reference to the slippery canvas and his inability to take down his opponent.

Having witnessed enough for the evening, I readied my belonging and exited the arena with several other reporters I hoped to catch a ride with.  Whether or not I considered the event a partial success is a moot point, yet I struggled with one fan quote after the event that left me with more than a bad taste in my mouth:

"There was no blood on the floor man. What kind of bulls*** is that?"