UFC 174 was an underwhelming card in terms of relevant matchups, and it played out in somewhat underwhelming fashion, though it certainly had its moments. The highlight of the night was Demetrious Johnson who, under the tutelage of Matt Hume, continues to improve from fight to fight even after defending the flyweight belt five times. The lowlight: much of the rest of the card.

That's a bit harsh, and there were plenty of solid fights on this latest in a never-ending stream of offerings from the UFC, but the discerning fight fan did not come away from UFC 174 with a particularly high opinion of striking in MMA. I try to positive in most of my analysis, but sometimes, in the name of continued technical progression, it's worthwhile to shine a light on some of MMA's less impressive moments. There will be time enough for the good stuff tomorrow; for now, let's break down some bad MMA.

It's not a good sign when the judges render a terrible decision, and yet I still cannot be bothered to care about the fight. Let's be clear about two things in this fight: Brendan Schaub should have won, and neither Schaub nor Arlovski looked like top 15 heavyweights.

Andrei Arlovski has been fighting for X years. In his career, he has been knocked out by the likes of Fedor Emelianenko, Pedro Rizzo, Sergei Kharitonov, and the incomparable Viacheslav Datsik, all of whom put Arlovski away via right hand. In other words, this is a punch that has troubled him throughout his career, and guess what? He still doesn't know how to defend them.

It's hard to pin the blame for this on any one person. Is it something with Arlovski? His coaches? Kid Nate? Whatever the cause, Arlovski somehow came into a bout completely unprepared to defend right hands, against an opponent who throws little else. Let's take a look at the first punch of the night. 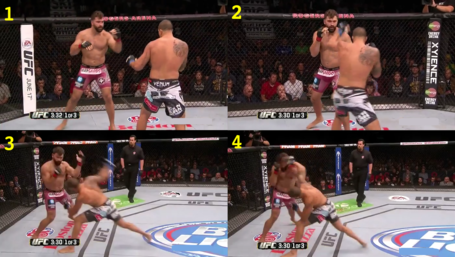 1. Schaub and Arlovski feint at one another (for a minute and a half straight).

2. Schaub steps forward , changing levels and covering Arlovski's vision with a jab. Arlovski thinks about countering with his left hook.

3. Realizing that Schaub's jab was just a set-up, however, Arlovski tries to bring his left hand back, and turns his head away from Schaub's incoming right hand.

4. Schaub connects to the exposed temple of Arlovski.

Everybody reacts badly to a punch on occasion, but this is a consistent problem for Arlovski. He has always possessed considerable handspeed, so it's understandable that, at one time, the Belarusian neglected defense in favor of preemptive offense. After 15 years, however, and 7 knockout losses, it is nothing short of disheartening to see him with no concrete answers to one of the most common attacks on the feet. Worse, the manner of his misreaction made him an easy target for switch-ups. 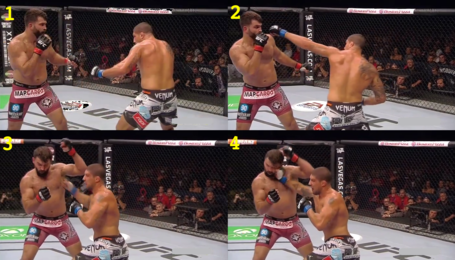 1. More standing around on the fringes of striking range.

2. Schaub steps in behind another jab.

3. Arlovski flinches again, throwing up his left arm to stop the overhand, but turning his head and looking down before the impact.

4. As such he's ripe for Schaub's right hand, which comes this time in the form of an uppercut.

There's no better way to maximize the power of an opponent's punches than to look away from them. Arlovski repeatedly took his eyes off of Schaub in this fight, and paid the price, struggling to avoid even the most telegraphed of blows. It's not easy to pin this consistent flinchiness on any one trainer, since Arlovski has bounced around from camp to camp in recent years, but it is most certainly the byproduct of poor training practices. The best guess is that Arlovski doesn't, and probably never has done, light and moderate sparring, or technical partner work. His only answers to an opponent's punches are to swing back, or close his eyes and weather the storm, and those are the first things you learn to do when tossed into hard sparring from the earliest stages of training.

Old-school MMA fans, don't worry. Arlovski wasn't the sole reason for this fight's inescapable aura of unimpressiveness. Brendan Schaub, too, the "New Breed" of mixed martial artist, showed some incredible one-dimensionality against the third legend on his list of "victims." 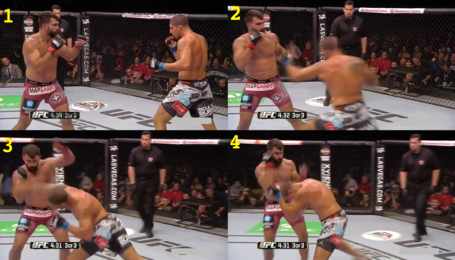 1. Schaub and Arlovski are, once again, quite far apart, each man trying to feint something out of the other.

2. Now Schaub steps in behind his jab as Arlovski begins to back up.

3. Schaub unloads a big overhand right, which misses the mark.

4. Thrown off-balance by the effort, Schaub ends up square and ducks his head, covering up with his hands in case of an Arlovski counter.

You'll notice that this is the same punch which found success against Arlovski in round 1. There's nothing wrong with throwing the same technique over and over if it's working every time, but this punch didn't. In fact, it stopped landing consistently in round 2, and now Schaub throws it again in round 3. Long jab, big overhand, no dice. The set-up and execution are identical. So, too, is Arlovski's defense, except that he has now started to back up in response to the jab, rather than starting to counter. This simple adjustment is enough to evade Schaub's attack, and makes Schaub look rather unimpressive as he shells up and, just like Arlovski, takes his eyes off his opponent when he senses that a counter could be imminent.

This is really some classic MMA striking by Schaub, and that's precisely why it's bad. Every movement is big. He throws a big jab, takes a big step, and launches a big right hand. Each of these motions is massive enough for even the extremely gunshy Arlovski to avoid Schaub's onslaught. Neither Schaub nor Arlovski ever used their jabs as measuring sticks, nor did they probe out the opponent's defenses in order to find new openings. Schaub simply expected the same opening to be there time after time, and when it wasn't, he seemed lost for answers.

Perhaps it was just an off-night for these two men, but it was definitely not a good performance.

This fight was both a perfect performance from Rory MacDonald (more on that tomorrow) and a terrible one from Tyron Woodley. Those two facts are not unrelated. MacDonald is a cerebral fighter. With an active jab and a diverse selection of attacks, he will calmly and patiently suss out the weaknesses in his opponent's defense, and then go to work.

As for Tyron Woodley, he is calm and patient as well. Far too patient. Woodley spent the better part of this bout waiting with his feet nearly square and his back against the fence, looking for the opening that never came. The following image is essentially a microcosm of the entire fight. 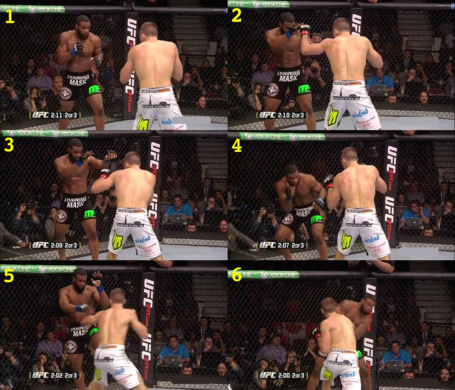 1. Woodley tries to move forward, away from the cage and toward MacDonald.

2. A couple of jab feints from MacDonald, quickly change his mind, however.

3. As Woodley's back nears the fence and MacDonald slowly closes the distance, his hands come up.

4. Another feint gets Woodley to slip to his right.

5. And a half-committed jab draws out every defensive reaction imaginable--Woodley parries, checks, and leans back all at the same time.

6. Really feeling the pressure now, Woodley tries to slip a right hand, but MacDonald throws it to the body and catches him on the way out.

This was the worst possible strategy that Woodley could have used against MacDonald. Unfortunately for him, it was the strategy he was most likely to fall into regardless of his pre-fight intentions. Woodley fancies himself a counter-striker. Against Josh Koscheck, he allowed himself to be backed into the cage, defended the wrestler's predictable right hand, and then countered with a massive right of his own. It was the perfect matchup for Woodley's powerful and basic brand of counter punching.

MacDonald doesn't just load up on single shots, however. Throughout this bout, Woodley found himself backing up over and over, without ever seeing MacDonald overcommit enough for him to comfortably counter. MacDonald's feints are an ever-present facet of his game, while Woodley did no feinting at all. He merely waited for MacDonald to give him the opening he wanted, and when that didn't happen, he let Rory run away with the fight. A counter-puncher cannot wait for the opponent to make mistakes; he must force the opponent to make mistakes. The counter-puncher's pressure is different from that of the pressure fighter, but it is pressure nonetheless. It is a difficult thing to confidently walk down a man whom you know can hit you with an unseen punch at any moment.

Woodley, though, did not put any pressure on MacDonald. He simply waited, and waited, and lost the fight.

Ah well. 174 was a frustrating card, but it was not without it's good moments. Tune in tomorrow for part 2 of this Tech Recap, wherein we'll celebrate the parts of this event that weren't terrible.