In today's contact sports landscape, serious concerns are constantly being raised about traumatic head injury. A steady flow of new scientific data points to most contact sports having significant risk factors for incurring some type of TBI. Bearing that in mind, companies are churning out unique products to help provide some of this useful data with the objective of preventing concussive injuries.

Everything from boxing/MMA gloves that measure force of blows to football helmet sensors that warn of concussion risks are available. Now, there is a mouthguard that can provide a measure of data indicating risk percentages for concussions. Fitguard is the latest in a line of sensor technology sports gear that aims to make contact sports safer.

In a recent interview with MMA Sentinel, Fitguard executive director, Anthony Gonzalez answered a wide array of questions about the new mouthguards. Here's what he had to say:

MMA Sentinel: Can you explain exactly what the product does?

Anthony Gonzales: I'm with Force Impact Technologies and we have developed a product called ‘Fitguard'. Fitguard measures the linear and angular acceleration, and displays that through high luminosity LEDs on the device. Our mouthguard also syncs up using Bluetooth low-energy to any smartphone, allowing you to read the measurement the device received. This allows us to make informed decisions about the risk of a possible head injury, specifically focusing on concussions in youth sports.

MMA Sentinel: Is it similar to how people can hook their iPhone up to a heart monitor, in showing you how close you are to getting a concussion for instance?

Anthony Gonzales: We're classified as a ‘technology wearable,' focused in the healthcare realm, like pedometers, Fitbit or smart-watches. They all have sensors that read information and transmit that back to a smartphone. We're doing the same thing, except we're applying it with more of a social goal: understanding head injuries that youth athetes expose themselves to, and to aggregate the first dataset for the head injury risk in various sports, ages and demographics. Currently the dataset for youths does not exist. All of the concussion research at university level is done on professional athlete adults, and that information isn't applicable to the age group we're trying to target, which is between the ages of 10 and 18.

MMA Sentinel: Is your main goal to become the official mouthguard of the NFL or similar organization, or do you want to be the number one product for hobbyists? What would you say your goal is?

Anthony Gonzales: It's to be synonymous with sports safety and to become a trusted brand. When you go to a store and see "fit" in front of a product, you'll know that is one of the safest things you can buy. This time around it might be the Fitguard mouthguard, but we might be able to embed the same technology into a knee-brace and have a ‘Fitbrace' to measure the possibility of an MCL tear. Maybe integration into an MMA glove to see how hard you're hitting and to make sure your wrist doesn't bend and you don't get a scaphoid injury. There is a lot of potential with the technology. Our first application is focusing on the mouthguard and head injury risks, but the company as a whole is about using technology to make sports safer.

MMA Sentinel: Is the mouthguard something that can be reset after a blow, or is it a one-time use device?

Anthony Gonzales: It's not a one-time use device. We like to think of the light as the brain's ‘check engine' light. Once the light comes on, it doesn't mean that we know what the issue is, it just means you should be removed from play for further evaluation. You can acknowledge the warning and there will be some protocols and suggested guidelines to follow, like a self-reported symptoms test which will be helpful when you present it to a physician. It will also give you some helpful links and guides to concussion protocols that the CDC has established. MMA Sentinel: So the information from the mouthguard would be given to a doctor to help establish what happened and diagnose the injury?

Anthony Gonzales: Yes. I would like to clarify that we are not a diagnostics tool: We are something a doctor would take into consideration when they are making their diagnosis. The physician is the only person who can diagnose a concussion. No piece of equipment, ours or anyone else's has that power. When a physician is presented with information such as, ‘here's a test they took at the beginning of the season, here's a high impact event, and here's the test they took after.' The physician can say, ‘well I see some variability between these two tests after this particular event.' That is very useful information for him when making a decision.

MMA Sentinel: How exactly does Fitguard detect concussions? Is it using an accelerometer or some sort of other technology?

In the past couple of decades the primary focus of concussion research has been operating under the assumption that linear acceleration is the only determining factor in a concussion. So they have stuff like the linear drop test, where they take a helmet 3 meters high and they'll drop it and measure the forces, but neuropsychology has developed enough that it's starting to have an understanding that the rotation and spinning of the brain is just as big of an indicator of a head injury risk. The rotation physically strains the axons in your brain, and gives it kind of a spiral fracture. If you think of squeezing a lemon and how all the pulp inside gets mushed around because you're rotating it, it's that same principle that happens to your brain if your head spins too quickly.

These things come from a neuropsychologist as well as a neurologist. We have a pretty good board of directors advising us from a medical standpoint, including a paediatrician and a dentist. We're not just making this stuff up; we're taking other peoples well thought out clinical research from peer-reviewed journals and using that information to improve our device. 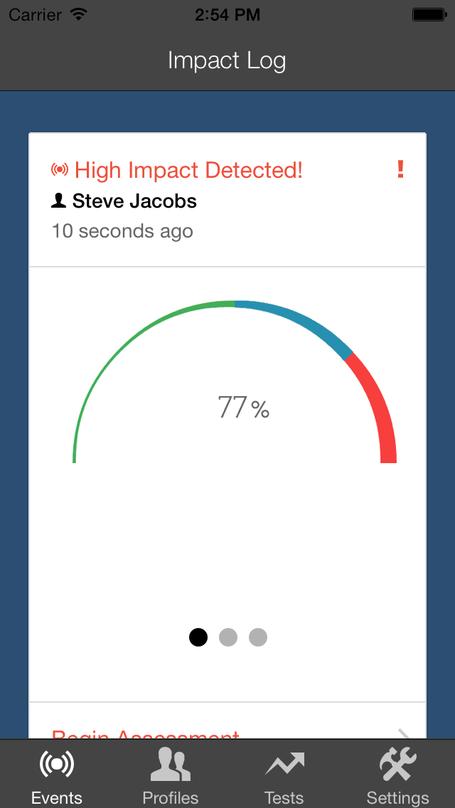 MMA Sentinel: Is there any data available on the accuracy of the mouthguard, like concussion hits on the mouthguard being confirmed via MRIs or other scans?

Anthony Gonzales: The only dataset that currently exists was aggregated from football helmets with accelerometers placed inside them and those were measured over time. There are a couple of problems with that dataset: The accelerometer is in the helmet, so there is a lot of centripetal force where the helmet can move when your head isn't moving, which can lead to inaccuracies. That dataset was also primarily focused on adults in highly competitive collegiate level athletics, so you can't apply that dataset to 10 year old kids. The paediatricians will tell you that that information is not acceptable to be using for kids; it's too big of a jump.

Even when they do crash test dummies for testing. They can't just take an adult crash test dummy and then shrink it by 50%. They have to make a specific kid crash test dummy because their bodies are so different. The dataset we have for concussions has the same problem; we can't just reduce the concussion threshold by 50% for someone half the size.  You need a dataset specifically for these athletes, and that's one of the biggest things we're trying to solve. We're aggregating and compiling a dataset for youths that doesn't currently exist today.

MMA Sentinel: Are there any plans to heighten the sensitivity beyond the current 50% chance?

Anthony Gonzales: One of the unique features about our device is that allows you to input your age, weight and gender, which are important variables for calculating a threshold of risk. So we've come up with some predetermined ranges and thresholds, like the 50% you mentioned, but we're also a big proponent of providing the tools to let the user have complete control of the mouthguard. On the mobile application you'll be able to override the threshold we've established to set a level of indication you're comfortable with. If you don't want to be notified until you've received over 100g's of force, you'll have the opportunity to program your device to not notify you until that point in time. So while we provide recommended thresholds to use, you're by no means obligated to use those. It's still going to measure the force and display that in your smartphone, the only thing that will be different is when it changes color.

MMA Sentinel: So what is the target market for the product?

Anthony Gonzales: Our device is for ages 11 and up. While we're targeting youth athletes, it's applicable to anyone; if you're out snowboarding for a weekend and you want to make sure you don't have a concussion, our device is a great solution. Or if you're rock climbing and you want to wear it just in case you take a bad fall, it'll let you see how bad the fall was. There are a lot of other applicable avenues where our device can add value to users, all the way up to a professional level. We might not have a goal of partnering with the NFL or the Raiders, but if you're an individual player you can still buy our mouthguard to protect yourself. We provide the opportunity for the individual to take control over their own health, which is important.

MMA Sentinel: Is the technology suitable for addition to softer, more malleable mouthguards sometimes used in other sports like MMA?

MMA Sentinel: How much will Fitguard cost consumers?

Anthony Gonzales: We're hoping to come to market at between $80 and $90, depending on our first production run. We should be around that $89 rate, which when compared to other impact indicators like football chinstraps or helmet accessories is good, because those tend to be upwards of $150. We're definitely in the cheaper range. Some people might say, ‘oh I'm not going to spend $90 on a mouthguard, that's ridiculous.' But when you understand the implications, and the value we can provide by saving you from a trip to the ER, that adds a lot of value.

MMA Sentinel: How much do these cost to manufacture, because it sounds like it would be expensive to implement that technology?

Anthony Gonzales: We have a good quality supply chain. We've got some good deals coming down the pipeline and everything is made here in America. We have a wonderful manufacturer up in Georgia. We're not a very labor intensive product, so we don't have to send stuff offshore. It's very technology driven, and a lot of that technology can be made here in the states, which helps to bring our costs down a lot.