A History of Violence: the North Caucasus and mixed martial arts' troubled pipeline of talent

Patrick Wyman digs into the troubled and violent history of Dagestan and the North Caucasus in anticipation of Ali Bagautinov's title fight at UFC 174.

Share All sharing options for: A History of Violence: the North Caucasus and mixed martial arts' troubled pipeline of talent

Ali "The Puncher King" Bagautinov will be the first of the recent wave of Russian imports to fight for a UFC title when he faces Demetrious Johnson for the flyweight belt on Saturday. Calling Bagautinov and his cohorts "Russian" and leaving it at that, however, obscures both the complexity and the textured regional character of this invasion.

Bagautinov, along with his countrymen Rustam Khabilov, Khabib Nurmagomedov, Rashid Magomedov, and Ruslan Magomedov, hails from the Russian federal republic of Dagestan, on the northern edges of the Caucasus Mountains. Dagestan is a thin slice of mountainous territory along the Caspian Sea that's roughly the size of the US state of West Virginia, with the population of Arkansas or Utah. In point of fact, none of the fighters I mentioned are really Russian, at least in an ethnic sense: they might hold Russian national passports, but Bagautinov and Nurmagomedov are both ethnic Avars, while Khabilov is a Kumyk and Ruslan Magomedov is a Nakh-speaker (ethnic Ingush or Chechen).

Dagestan, like the entire North Caucasus region, is a patchwork of distinct and often mutually hostile ethnic groups. When I say distinct, I mean that these people speak languages as different from one another as Basque and Spanish or Hungarian and German in the space of a dozen miles. 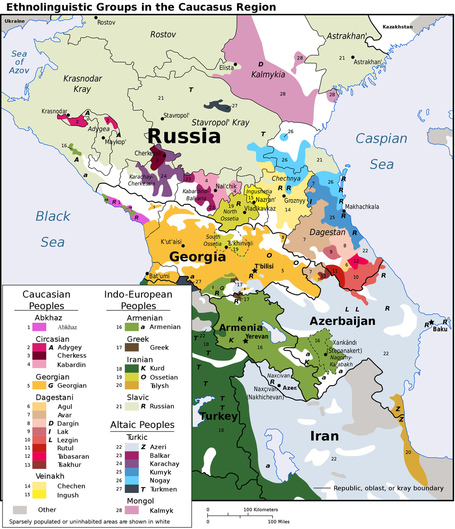 This is a place where those differences matter.

These sharp divides are partially a product of the region's geography, which is mountainous and riven with sharp-edged ridges and deep canyons:

The North Caucasus region as a whole also includes the republics of Ingushetia, Kabardino-Balkaria, North Ossetia-Alania, Karachay-Cherkessia, Stavropol Krai, and most famously Chechnya. It's roughly the size and population of the U.S. state of Georgia. Take away Stavropol Krai, which is essentially an ethnic Russian enclave with a two-century history of anti-Caucasian sentiment (blame the Cossacks for that), and the cultural region is closer to the size and population of Indiana.

Over the past two and a half years since Nurmagomedov's debut, we've seen a bare trickle of signings of North Caucasian fighters turn into a steady stream: at current count, there are 14 fighters from the region on the UFC's roster, with a combined record of 21-4. Most of them still come from Dagestan, the most populous and wealthiest part of the region, but we're also beginning to see a rise in signings from Chechnya (Adlan Amagov, Zubaira Tukhugov, Mairbek Taisumov) and Kabardino-Balkaria (Albert Tumenov). Based on my experience evaluating prospects, these guys are only the tip of the iceberg: for every promising young fighter already in the UFC, there's another unsigned prospect with every bit as much potential.

Per capita, there are already more fighters from the North Caucasus (about one per 500,000 inhabitants) than from the US states of Oregon or Arizona, which are obviously far closer to the UFC's home base and much more heavily scouted by American promotions. For comparison, there are more Dagestanis alone than Swedes. There are as many North Caucasians as fighters from Great Britain, which has nearly ten times the population.

What exactly is it about this region that produces such an incredible concentration of mixed martial artists?

The easy explanation, and the one on which many previous discussions of this topic have focused, is the North Caucasus' long history of internal and external conflict. Hard times make hard places, the reasoning goes, and hard places produce hard people. Being really good at fistfighting for money in front of a cheering audience would seem to be a natural product of such a historical environment and the cultural norms it produces. 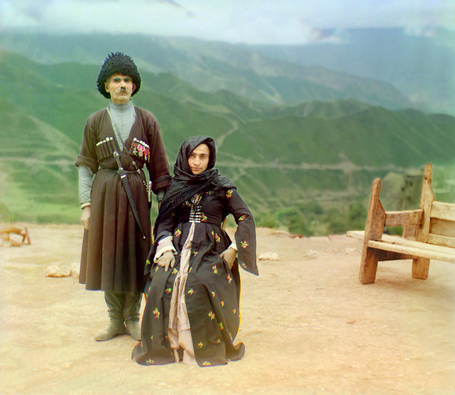 Dagestani couple, 1904. Note the distinctive sheepskin hat - a papakha - and the traditional knife. (Photo by Sergey Prokudin-Gorsky, via Wikimedia Commons)

In the North Caucasus, there have been plenty of bad times upon which to draw. Following centuries of low-level warfare and raiding between the natives and their Cossack foes across the border, the Russian Empire conquered the region over the course of the nineteenth century in a series of destructive conflicts. These wars included the "cleansing" - genocide and expulsion en masse - of the Circassian ethnic group and enormous forced population transfers to Central Asia and Siberia. During the Second World War, Stalin deported the entire Chechen ethnic group on the thin suspicion that they'd collaborated with the Nazis, and they weren't allowed to return until 1957.

More recently, conflict again embroiled the North Caucasus following the fall of the Soviet Union. The First Chechen War began in 1994 and culminated in the two-month Battle of Grozny, which saw tens of thousands of civilian deaths in the largest bombing campaign in Europe since the Second World War and the destruction of most of the capital. Chechen fighters recaptured the city in August of 1996 and signed a cease-fire with the Russian Federation shortly thereafter. 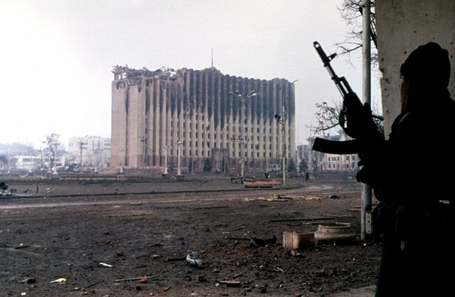 The conflict spread to Dagestan in 1999 when Islamist radicals who had cut their teeth during the Chechen conflict invaded the neighboring republic in support of local Islamist separatists. The particular brand of often-violent Islamic fundamentalism and ultraconservatism that has spread throughout the region in the last 20 years has its roots in a Wahhabi (or Salafi) practice more commonly found in the Arabian Peninsula. Clashes between the typically younger adherents of the new fundamentalist Islam clash regularly with followers of the more traditional, Sufi-influenced variety of Islam native to the Caucasus.

Although they were quickly driven out of Dagestan, the series of incidents cost thousands of lives and immediately sparked the Second Chechen War. Unlike the first conflict, which was largely a nationalist struggle with only an undertone of religious militancy, the second war rapidly took on the character of a Islamic jihadist campaign against Russian occupation. Another massive battle consumed Grozny, which the United Nations called in 2003 "the most destroyed city on earth." While the war proper ended in 2000 with a ceasefire, a low-level guerrilla insurgency has raged throughout the North Caucasus ever since, spilling out of Chechnya and into the surrounding republics.

It's difficult to overstate the sheer scale of these conflicts, especially in Chechnya: tens of thousands of militants, civilians, and Russian troops have been killed over nearly two decades of war. Cities have been leveled to the ground by artillery, ballistic missiles, and air strikes. The populations of entire villages have been massacred or "disappeared" by Russian federal forces, Islamist militants, and local nationalists in an orgy of religious, political, and both intra- and inter-ethnic carnage. Terrorist bombings and mass hostage situations remain all too common. Violence both between and within individual ethnic groups accompanies the normal course of local political life, and assassination attempts on politicians are common.

The heavy hand of the Russian government's reprisals and the repeated waves of terrorist and guerrilla activity means that tensions between people from the region and ethnic Russians run high. The trial of Dagestani MMA fighter Rasul Mirzaev (a recent signee to Ed Soares' RFA promotion) was a flashpoint for these issues. The 145-pound Mirzaev, a Combat Sambo champion, got in a fight at a Moscow nightclub and dropped his much larger opponent - an ethnic Russian - with a single punch. The man hit his head on the pavement, slipped into a coma, and died. When the charge was reduced from murder to manslaughter and Mirzaev was sentenced to 15 months in prison, Russia's most powerful ultranationalist group protested outside the courthouse. This led to six arrests, including that of its well-known leader, Dmitriy Dyomushkin. Dyomushkin isn't exactly small potatoes, and neither is Russia's ultranationalist movement. While this group in particular is seen as extremist, similar views - focusing on the desire to "purify" Russia of foreigners, including people from the Caucasus - are widely shared among the Russian populace.

Fighters from the region, then, have known war and suffering and ethnic and religious prejudice since early childhood. Adlan Amagov, for example, has spoken about the experience of growing up in a refugee camp with Russian soldiers shooting at them from helicopters. For those born after, say, 1985 - i.e. most of those currently making their way to the UFC today - it's literally the only world they've ever known, the constant noise echoing in the background during their youth. Even well-known athletes and sports officials aren't immune to this cycle of violence: 2008 freestyle wrestling silver medalist Bakhtiyar Akhmedov was shot in the stomach last year (he refused to name his attackers and claimed he shot himself), and the Dagestani Judo federation's vice president was shot and killed in 2010.

Next to all of that, what's so scary about a fistfight?

I don't want to minimize the importance of this constant conflict to the people who have to live with it on a daily basis. This is a place where really, really bad things - suicide bombings, police raids, kidnappings, and gun battles chief among them - happen on a regular basis. Dagestan has been called the most dangerous place in Europe, and with good reason.

Conflict is not, however, a complete explanation for the predominance of fighters from this region. Afghanistan, large portions of Africa, and the Balkans have all been stricken with conflict for decades, and we're not seeing a massive influx of Bosnian or Pashtun competitors at the highest levels of mixed martial arts. It's all too easy to overemphasize the violent environment and ignore the other cultural, social, institutional, and economic forces that contribute to produce a context that churns out talented and skilled fighters at an incredible rate.

Still, that history is an essential piece of understanding how and why these fighters have come so far, so fast.

Check back tomorrow for the second installment of this story.