At the UFC Fight Night in Berlin, the German fans got treated to a fun grappling match between Niklas Backstrom and Tom Niinimaki. It was back and forth, and then late in the first round Backstrom landed a knee that clearly rocked Niinimaki. Dazed the Finish fighter clung to Backstrom's leg, setting up a rather entertaining sequence for the final submission.

Here is a gif of the submission before we break it down.

So it all started with Niinimaki tries to finish a single leg take while facing and locking his grip up the wrong way, which was a big mistake. Now clearly this was a mistake made because Niinimaki had just gotten starched full in the face with a knee and was not thinking clearly, so don't be too hard on him as it is a completely understandable mistake. But also credit must be given to Backstrom for both the knee and how he reacted to this mistake.

Niinimaki manages to off balance Backstrom, but he lands in a terrible position. As you can see below Backstrom was already beginning to lock up a figure four grip with his arms for the choke, and Niinimaki's left arm is entangled in Backstrom's right leg, which he used to get the take down, but it will become a case of who's controlling whom in a few seconds. 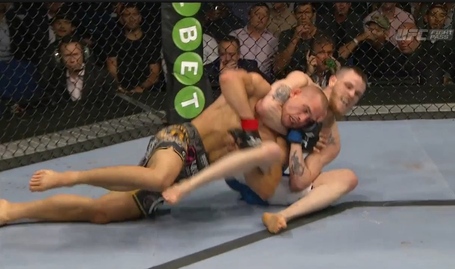 When they hit the ground Niinimaki pops up to his knees, but his left arm is now effectively trapped by Backstrom's right leg (pictured below, circled in blue). Let's focus on the trapped arm right now and just forget that Backstrom has a choke also locked up, even then Niinimaki's options are very limited in this position. 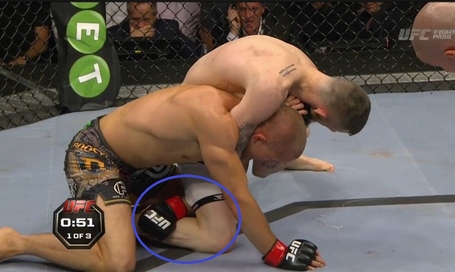 Even without the choke locked up if Niinimaki mobility is severally limited due to this arm entanglement, he cannot rotate to face Backstrom and begin to wrestle as he would basically be shoulder locking himself at that point. Niinimaki has made one of the only defensive moves open to him, he has stepped over Backstrom's leg with his left leg. While this doesn't help with the choke, it does help prevent a rolling reverse omoplata, which is a very effective attack from this position.

The rolling reverse omoplata is most commonly seen in BJJ and Sambo and comes from this sort of arm/leg entanglement. The top man does a forward roll, his legs torqueing on the shoulder of the bottom man, forcing him to roll as well or have his shoulder destroyed. Once the bottom man lands on his back the game is up as all the top man has to do is sit forward to finish the hold.

Here is a particularly nasty example from the 2011 Sambo World Championships:

That leg positioning by Niinimaki also stops a straight armlock from that turtle position, so despite being clearly hurt by that knee, Niinimaki still clearly has some defensive instincts working. Backstrom decides to roll forward to take the crucifix position, very nuanced and advanced submission grappling position which takes a great deal of skill to maintain provides a high degree of offensive potential.

Marcelo Garica is a huge fan of crucifix position and it all comes off his love of the seat belt grip from the back, so here is the grappling guru himself discussing the position, the importance of the grip, and demonstrating that straight arm lock I mentioned from the top and from the back.

MG in Action - Crucifix Armbar from Back. (via Devlinm101)

As Backstrom rolls however he loses the arm, and that is where the rear naked choke he locked up becomes important, because he doesn't need the arm or even hooks to finish from the position he lands in, pictured below. 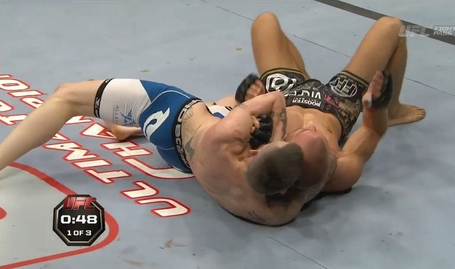 The figure four grip for the rear naked choke is incredibly strong when fully locked up, and the best escape from a fully locked up rear naked choke on the ground is turn towards the "choking elbow". In this case Niinimaki would want to spin to the right. Known as "turning into the choke" it takes the pressure off the neck and as Niinimaki spins it would turn a very threatening choking grip into a harmless head lock.

But Backstrom knows this and in the gif you can see him drive that choking elbow to the mat, exactly what he would do if he had traditional back control. By putting the choking elbow on the ground, the mat actually blocks Niinimaki's path to safety and increases the leverage on the choke, forcing the tap, no hooks required!

It was a very clever piece of grappling by Backstrom to finish off a wounded opponent. To close with here is a video of Marcelo Garcia rolling. It is well-known his grappling ability is over 9000, and Garcia has apparently not just become bored with choking people with back hooks, but has reached a new form that finishes one armed chokes like that is an easy and effortless thing. So enjoy the grappling brilliance and the choke faces.