With pay-per-view sales down for the UFC perhaps it's time for the UFC to learn a lesson from boxing: that less can sell just as much.

Share All sharing options for: When It Comes To PPV The UFC Could Learn A Lesson From Boxing

I like boxing. I have for years. Which is why its inevitable death is so sad, for haven't we been warned of its demise for years by no less a "boxing fan" than Dana White?

My honest opinion of boxing is that boxing will go away," White told ESPNRadio's Ryen Russillo. "I don't wish it any ill-will. It's not because the sport isn't good or anything like that, it's just that it's so fragmented, and so many bad things have happened. Nobody is going to stick their hand in their own pocket and spend their own money to save the sport of boxing, nobody is going to do it."

Obviously White's predictions of boxing demise are best not taken seriously (especially when he is branding himself as its savior.). They are nothing more than UFC talking points, in the same vein as the old Zuffa myth, that allow them to sell themselves as the sport of the future while shading a competing combat sport in less than flattering light. Dana White is merely taking advantage of a very old meme.

But while White's views on boxing's future prospects are less than informative, what is worth paying attention to in that old interview was his diagnosis for what ails it:

"Once everything went to a pay model, boxing stopped giving you good fights for free. As soon as that model ended your market starts to shrink when you're only on pay-per-view."

At this point, one wouldn't be faulted in thinking that perhaps Dana White was speaking of the UFC and not boxing, for not only is the UFC planning to sell 13 pay-per-views this year, but are also expecting fans to pay an addition $9.99 a month if they want to see 12 international shows streamed on their Fight Pass network. Half of their events are now behind a paywall without the added value of Game of Thrones or Homeland.

Perhaps Dana White's explanation explains why, according to Dave Meltzer at MMA Fighting, sales for pay-per-view events this year have been less than stellar for the UFC:

Both UFC 170 and UFC 172, headlined by Rousey and Jones, are looking at about 350,000 buys according to industry estimates. The latter, Jones' event, looks to have the slight edge, nor surprising with a better known contender and stronger undercard...

Sandwiched between, UFC 171, the March 15 welterweight showdown night with Johny Hendricks vs. Robbie Lawler for the title St-Pierre vacated, as well as strong contender fights with Tyron Woodley vs. Carlos Condit and Hector Lombard vs. Jake Shields, looks to have done about 300,000 buys.

Still, after four events this year, UFC is at an estimated 1.23 million buys, which isn't that much more than UFC 168, the last monster show, did on its own.

In comparison, that "dying" sport of boxing suddenly looks much healthier. Saul "Canelo" Alvarez's match with Alfredo Angulo earlier this year was estimated to have sold "well over 350,000" pay-per-view buys, putting it ahead of any UFC event so far this year. That was surpassed last month by the Manny Pacquiao-Tim Bradley contest which reportedly sold 775,000 to 800,000 payperviews. Combined those two events have sold nearly as many pay-per-views as all four UFC events combined. And while the numbers for Mayweather-Maidana haven't been reported yet, it's considered almost a given that the final amount will be safely above the 1 million mark. By the end of the year it seems very likely that boxing will have  sold more pay-per-views than the UFC for the first time since 2007, and doing so while offering a much smaller number of pay-per-views shows.

So what is behind boxing's changed fortunes? For one thing it learned - from the UFC no less. Stacking pay-per-views with big names on the undercard, offering more competitive match-ups, broadcasting the prelims, offering knockout bonuses. Those are all things boxing has borrowed from the UFC.

There is one lesson that boxing has learned on its own though that the UFC would be very wise to pay attention to. Namely that pay-per-view should be reserved for marquee events. This is a lesson that the Sports Business Journal looked at earlier this year in an article that also provided the graph below which aptly demonstrates the fact that "HBO was bringing in nearly as much money airing four or five pay-per-view fights a year as it did when it put on eight or 10." 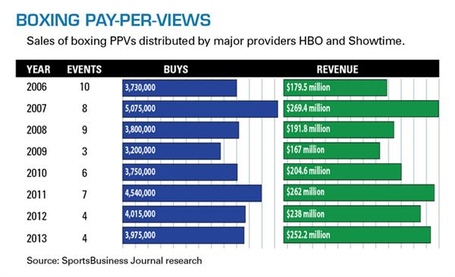 The lesson: Though less isn't always more, it's about as much.

The article also provided an interesting breakdown of the economics of a pay-per-view. The fact that a promoter in boxing could afford to pay out $5 million in purses for a 200,000 selling pay-per-view should be sufficient to explain why the UFC, with its much lower payouts, is hesitant to cut the number of such events. But this may be shortsighted by the UFC, for as HBO's experience demonstrates, the UFC is only cannibalizing the sales of their bigger events when they run so many less compelling cards.As Bill King summarized at the end of his piece:

The lessons of the last eight years would seem to indicate that it's best to reserve pay-per-view for only the top-shelf fights; that the realities of a finite market will make winners of four or five of the fights and losers of the rest.

To improve their pay-per-view sales numbers perhaps it's time the UFC took a lesson from the much maligned sport of boxing and started offering less pay-per-views.