Approaching a full year since his last fight, the UFC has taken lightweight contender T.J. Grant off of the rankings list.

Less than 12 months ago, T.J. Grant (21-5) was slotted for a PPV main event lightweight title fight against then-champion Ben Henderson. The Canadian had earned it after an upset knockout against Gray Maynard at UFC 160 on May 25th, a win that extended his unbeaten run at lightweight to 5-0. A concussion suffered in training soon forced him out of the Henderson fight, which is why Anthony Pettis is the current champion. Grant's concussion problems are still lingering, and with Pettis is instead fighting Gilbert Melendez at the end of the year, he's officially lost his spot as "#1 contender".

Today, the UFC's rankings page was updated, and Grant's name has been removed from his #4 spot and is unranked -- which I guess means that he can no longer "milk" his injury like Michael Johnson claimed. Everyone ranked below him has moved up one spot, with Jorge Masvidal entering the top 15 for the first time. 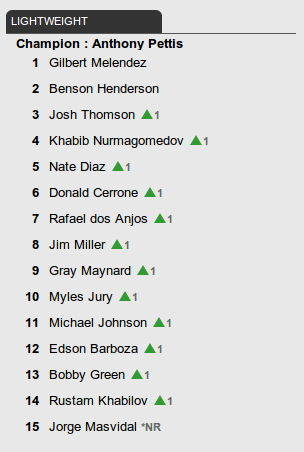 There is some recent precedent to what the UFC is doing with its rankings, as they removed Antonio Rogerio Nogueira due to his 1+ year long inactivity, as well as Martin Kampmann and Alan Belcher after their public plans to take long-term hiatuses. Why Dominick Cruz, whose last fight was in 2011, isn't getting the same treatment makes little sense to me, but it's not like the UFC has a sterling reputation for consistency.

Grant is hoping to fight on the Halifax card on October 4th, which would be 17 months since the Maynard win. If he does compete again, the question then becomes whether or not he's matched with another top 10 fighter or if he's given the equivalent of a "tune-up" as he recovers from this clearly serious head injury.