Few fighters have experienced as much improvement in the space of two years as TJ Dillashaw has under Duane Ludwig. BE's striking specialist Connor Ruebusch breaks down Dillashaw's technical progression.

The second youngest member of Team Alpha Male, TJ Dillashaw is just 11 fights into his mixed martial arts career, but it's been a long and winding journey nonetheless. Like every other Alpha Male fighter, Dillashaw began his MMA career with little more than a strong wrestling game and a penchant for choking people out. Over time, however, he began to turn that athleticism to striking, developing some powerful kicks and punches to complement his grappling acumen.

However, it wasn't until coming under the tutelage of MMA veteran-cum-head coach Duane "Bang" Ludwig  that Dillashaw's talent for striking really began to show. Indeed, Ludwig seems to mesh with Dillashaw better than any other Alpha Male fighter, and their training relationship has turned Dillashaw into one of the most dangerous kickboxers in the sport, without compromising his wrestling game one bit. In fact, Dillashaw's grappling is more fearsome than ever before because of how well it's integrated with the rest of his style.

Today we celebrate realized potential by looking back at the career of TJ Dillashaw--a sort of technical retrospective--from his UFC debut to his imminent title shot, breaking down all of the improvements he's made along the way.

December 3, 2011: Dillashaw suffers his first professional loss to John Dodson, getting knocked out by the future flyweight title contender at 1:54 of the first round

After just four professional fights (and two dominant exhibition wins on the Ultimate Fighter), Dillashaw met John Dodson in the Ultimate Fighter Season 14 Finale. Dodson, already a veteran of 16 fights (with impressive performances against Mike Easton and John Moraga), was too savvy for Dillashaw, and the holes in Dillashaw's standup game, obscured by his tremendous grappling up to that point in his career, were exposed in dramatic fashion. 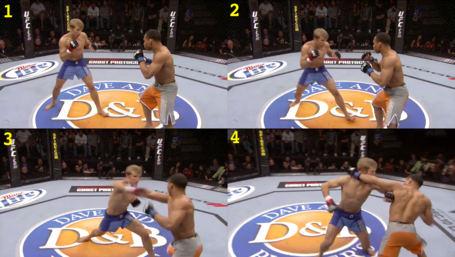 1. Dillashaw stands out of Dodson's reach, and his own.

2. Dillashaw gives two perfunctory pumps of his left hand as he moves forward, threatening a jab without ever having established it.

3. Having failed to sell his feint, Dillashaw badly telegraphs his right hand and throws it from too far away.

4. Dodson casually moves his head and clotheslines Dillashaw with a punch-turned-forearm to the jaw.

At this point, Dillashaw's best striking assets were his kicks, which were almost as fast and powerful as they are now. Against a fighter of Dodson's caliber, however, speed was not enough, and Dodson spent the first three minutes of the first round easily avoiding Dillashaw's kicks. As evinced in the frames above, Dillashaw's game lacked set-ups more than anything else. Confronted with an opponent who back away from his strikes, he simply charged forward even more earnestly until he caught his man, or vice versa.

The biggest flaw here is Dillashaw's ignorance of proper range. In frame 3 you can see the huge gap between Dillashaw's feet and his opponents. Even had Dodson not moved his head, Dillashaw's right hand would have fallen short. Once the punch did miss, Dillashaw seemed to have no plan B. It didn't take Dodson long after Dillashaw's strike to counter, but some defensive movement would have been better than what Dillashaw ended up doing, which was standing up tall and eating a nasty blow to jaw.

July 11th, 2012: Dillashaw gets his second UFC win, submitting Vaughan Lee via rear naked choke in the first round

Nothing of note here. This was, by and large, the same Dillashaw that beat Dustin Pague and Roland Delorme on TUF, but also the same one who lost badly to John Dodson. In short, this was a quintessential Alpha Male fight for Dillashaw, wherein he proved himself still capable of beating most of the division, without showing that he would ever be able to do the same against a championship-level athlete.

Bellator 120 was a little weird, but it was also a historic event in the still-developing sport of MMA. Most importantly, it had lots of punching! BE's striking specialist Connor Ruebusch breaks down the best sequences of the night.

March 16th, 2013: Dillashaw knocks out Issei Tamura with a kick/knee to the head 26 seconds into round two

New developments for Dillashaw in his first fight under Coach Ludwig's supervision. Some bizarre shoulder-shrugging and posturing (GIF) distracts from the very real improvements that Dillashaw has already made.

Noticabley Dillashaw shows off what, with a mere three months of Ludwig's training under his belt, can only be a natural predilection for phase-shifting. I becomes clear in this fight that Dillashaw's ability to seamlessly transition from striking to grappling is almost unparalleled in the UFC. Doubtless it was Ludwig who unlocked Dillashaw's talent, however. Starkly contrasting his promotional debut against Dodson, Dillashaw turns a whiffed right hand into a takedown early in round 1, ducking under a counter from Tamura in the process (GIF).

Here is where Dillashaw's newfound predilection for kickboxing was first revealed. After setting up his takedowns with strikes to great effect, Dillashaw flipped the formula, and began feinting the shot to create openings for strikes. Twice near the end of round 1 Dillashaw attempted a head kick off a feigned shot, foreshadowing what was to come just 26 seconds after the start of the next frame. 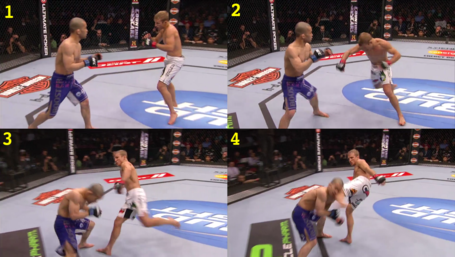 1. After grinding Tamura against the fence for much of the first round, Dillashaw backs his opponent into the corner again in round two.

2. Dillashaw takes a lunging step forward with his left foot, looking down at Tamura's legs in the process to help sell the takedown.

Miraculously, Tamura survived the roundhouse knee to the skull, but a series of sharp, accurate punches on the ground sealed the fight for Dillashaw.

Dillashaw steps into the Octagon just over a month after crushing Issei Tamura, and there is yet more evidence of serious technical progression. From the first bell, Dillashaw shows a new grasp of feints. Level changes, small steps, movement of the hands and head: Dillashaw has it all, and it's enough to freeze Hugo Viana in his tracks throughout much of the round (GIF). Finally, with about a minute left to go, Dillashaw rocks Viana with  a head kick-right hand combination that sends Viana reeling around the Octagon with Dillashaw hot on his heels. For a moment, Dillashaw is his old self again: desperate to finish Viana once and for all, he chases after him, lunging with no thought for defense or range-finding. But once Viana looks to be getting his legs back, Dillashaw calms down, assesses the situation, and goes back to what worked earlier in the fight. 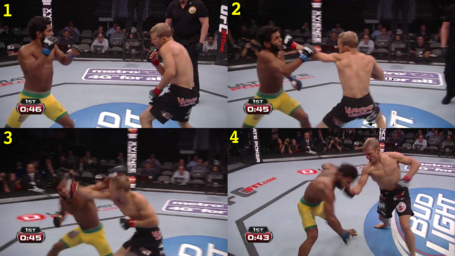 1. Dillashaw throws a subtle feint at the still stunned Viana, who reacts with a telltale flinch.

2. No feint this time: Dillashaw sticks his jab in Viana's face, popping his head back and obstructing his vision.

4. After a few missed punches, Dillashaw sits his flummoxed opponent down for good with a right uppercut to the jaw, finishing him off with some more solid ground striking.

This is a pivotal moment for Dillashaw. Viana gives him more trouble than any opponent since 2011, though not nearly as much as Dodson. "Wolverine" responds to Dillashaw's pressure in kind, replying with punches and shucking off takedown attempts. It is the first time since Dodson that an opponent has not backed up simply because Dillashaw wanted him to.

Of course, Dillashaw passes this test with flying colors. His rhythm changes a bit in response to the greater threat, and for a few minutes he seems hesitant, but once he finds something that works, he goes for the finish, and ultimately does so in a calm and calculated fashion. Dillashaw is turning into a hyper-athletic stalker, capable of pressuring his opponents with a dual takedown-and-kickboxing threat, and just as capable of backing off to counter.

October 9th, 2013: Drops closely contested split decision to Raphael Assuncao, who stands as probably the most underrated fighter on the UFC's roster

January 15th, 2014: Dillashaw assists in a three round exhibition of Mike Easton's chin, completely dominating the Lloyd Irvin fighter in every phase 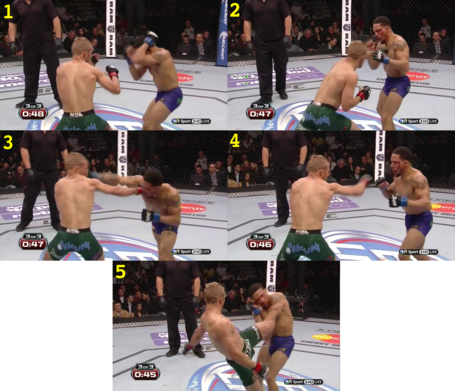 2. Dillashaw attacks the open side of Easton's head with a southpaw lead left (a new favorite trick of his), but he's out of range.

3. As Dillashaw pulls back into his stance, he sticks Easton with his jab to thwart an attempted right hand.

4. Another jab from Dillashaw just to make sure that Easton is still at the same distance as before.

5. The left hand couldn't quite reach at this distance, so Dillashaw adjusts with a hard kick to the liver.

In our first example Dillashaw struggled to do anything after missing with his cross. Against Tamura he showed that he could recover and turn his failed strike into a takedown. Now Dillashaw is balanced and composed enough to actually measure the range safely with his power hand, even peppering the opponent with attritive strikes if he does try to counter.

Dillashaw's control of distance, once a nonexistent aspect of his game, is now sublime. Ludwig is constantly heard urging Dillashaw to "just touch" the opponent from the corner, and that's exactly what Dillashaw does. Any time he misreads the range with a power strike, he quickly corrects for his mistake with a pawing jab, adapts to the circumstances, and throws a more appropriate power strike right after. In the GIF above, Dillashaw even follows his body kick up with an attempted high kick, and despite the fact that he misses, stays balanced and close enough to Easton to counter Easton's attempted counter kick with a stiff jab to the chin.

This truly is a rarity in MMA, where fighters routinely jump completely out of range any time they feel they don't have the initiative. But Dillashaw, with Ludwig's guidance, is a special fighter, and feels comfortable spending the entire duration of the fight right on the fringe of his opponent's range, or well inside it.

Has Dillashaw improved even more since January? It's not unlikely at all, and that's an exciting prospect. Dillashaw's journey from wrestler to fighter to complete mixed martial artist is marvelous to look back on, but it's the future that interests me the most, as we have almost certainly not yet seen the best that TJ Dillashaw has to offer.

For more analysis, as well as fighter and trainer interviews, check out Heavy Hands, the only podcast dedicated to the finer points of face punching. This week's episode features an interview with BE writer and professional fight scout Pat Wyman.