Tito Ortiz may have just booked his first win since 2011, but TJ Grant remains unimpressed.

In a night that represented a huge upset for "The People's Champion" not everyone was feeling the love. Ortiz completed an entirely improbable comeback by not just returning from retirement (and injuries which I'm told required the work of a number of King Mo's men and horses) but actually winning the fight too. He got tagged up pretty hard to start the fight and by all accounts looked to be heading for a bad loss when he was able to back Shlemenko up against the fence, secure a takedown and lock in a fight ending arm triangle. Credit to Shlemenko's toughness, he didn't tap, but that just meant that Ortiz got to pick up the first technical submission of his career.

An impressive feat? Depends on who you ask. As currently sidelined UFC lightweight T.J. Grant made clear on Twitter: 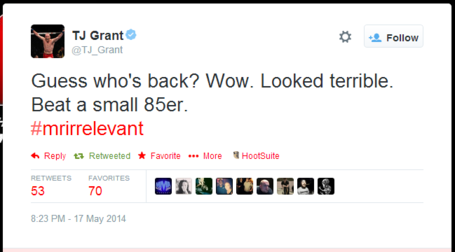 When fans pointed out that this might come across as a bit "disrespectful" to the former UFC light heavyweight champion and hall of famer, Grant was quick to respond.

@Joshua_Levi92 wouldn't disrespect be digging a imaginary grave for a much smaller fighter that is unconscious on the floor?

Unfortunately for Tito, the sword really does cut both ways. He picked up an impressive and unexpected win, but he was getting thrashed up until the takedown. The fact that Shlemenko was unable to regain any composure on the ground says a lot about his general lack of grappling skill, but it's easy to see Tito's big size advantage as a factor too. Either way, Grant seems to be firing hard at Ortiz and at the fact that this fight got made in the first place. Stay tuned to Bloody Elbow for more news and updates on the Bellator PPV.