Matt Betzold: A lot of people say I have one leg, but I actually have three

Decorated grappler and MMA prospect Matt Betzold discusses the difficulties of getting fights against 'guys with all of their limbs,' and talks about his motivation.

Share All sharing options for: Matt Betzold: A lot of people say I have one leg, but I actually have three

MMA Sentinel recently interviewed Matt Betzold, who just signed a 6 fight deal with XFS after struggling to get a long term deal for years. It's hard for up and coming fighters to get regular fights, but that's made even more difficult when opponents regularly pull out of fights against you because you're an amputee.

Matt lost the lower half of his left leg as a six year old child when a mentally ill lodger at his family home poisoned him after giving his family tainted candy in an attempt to get to his father after a dispute. After spiking a 110 degree fever he was taken to hospital. The next thing he remembers was waking up six weeks later, missing his left leg below the knee.

Despite this, Matt has gone on to have an extremely successful grappling career, with over a dozen medals from various grappling contests, including a win over Darrell Montague. Despite the difficulty in finding opponents, he has made the transition into MMA with a winning record at both the amateur and professional level and currently trains at team Alpha Male.

Matt is legitimately one of the funniest guys in the sport. From his self-deprecating claim that his dozens of grappling medals are from less dangerous sports like croquet and golf to his story about losing his leg to a shark in his swimming pool. It's hard to do justice to humor like that via text, so make sure you listen to the full audio here on MMA Sentinel.

Being called an ‘Amputee Fighter'

A lot of people say I have one leg, but I actually have three legs. I have a spare one in case the other breaks. I guess you could say I'm an amputee, but I prefer to just call myself a fighter. I don't like to be labeled based on that, because the fact of the matter is I'm more of an animal than all of these guys with two legs.

When you see Jon Jones, you don't say "Jon Jones with the huge wingspan." It's the same thing with me. I don't look at it as a disadvantage for me, I use it to my advantage to win my fights. I don't want to be called an ‘amputee fighter,' I'm a fighter.

I generally have a chip on my shoulder. I'm kind of prejudiced against guys with all of their limbs.

*All images courtesy of Matt Betzold* 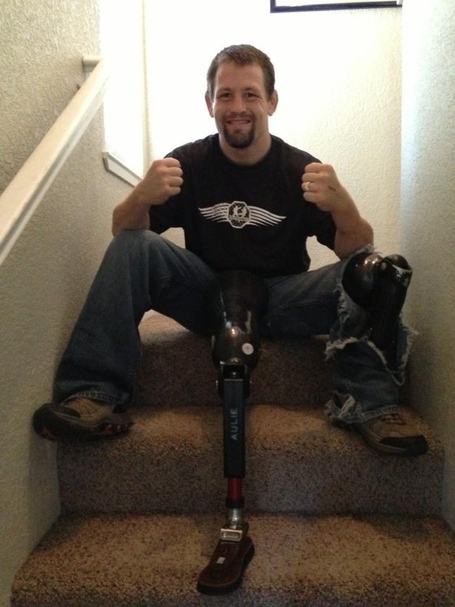 I think anger has a lot to do with my motivation, with how I fight and with how vicious I am. For the last two years I've gone out there knowing I cannot lose, because that's what these people expect. So I train to make sure I'm ready, and no matter who gets in there, I'm not going to lose. I constantly say that, and that's because of my prejudice against people that are able bodies [laughs]. I'm not trying to be an asshole, but that's kind of true.

I wish Kyle had won his fight, it would have helped us out a lot, but he definitely got in there and tried. I don't really like what happened to his opponent; when his opponent beat him the whole crowd turned against him for fighting Kyle Maynard. He should be applauded for getting in there, because a lot of fighters won't fight guys like that. They just refuse. It was disappointing when the audience didn't applaud the guy for fighting Kyle Maynard. 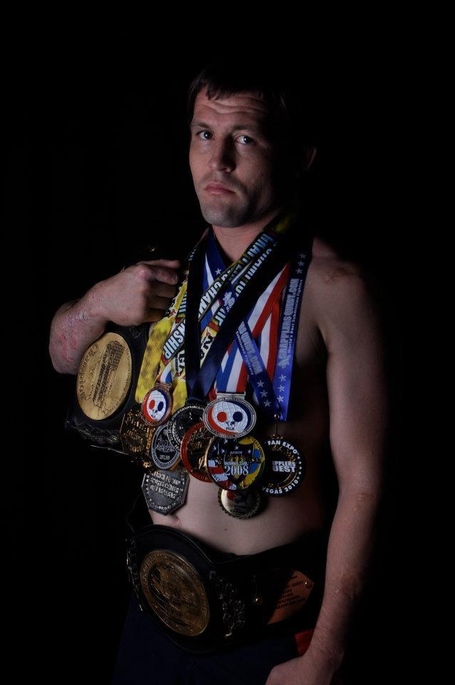 There are people in the UFC's top 10 who have dodged me all the way up. John Moraga has had six opportunities to fight me, but he wouldn't.

I would have more fights and more wins on my record, but the fact of the matter is guys are scared to fight me. I get fights set up and then the week of the fight, someone will pull out. That or they accept the fight for a few days, then they pull out. These guys are a bunch of pussies. I thought we were all supposed to be fighters. That's what I'm dealing with.

Dana White should be asking his guys why they won't fight me. Is it because they're scared? I already know these guys are scared, and I know I could beat these guys. Dana White just needs to give me a shot.