BE Analytics: Is striking cumulative or do MMA fighters fully recover between rounds?

Does beating someone up make them more likely to get knocked out later or do the effects of strikes fade between rounds? Bloody Elbow’s analytics expert investigates to see if MMA fighters are able to fully recover.

Share All sharing options for: BE Analytics: Is striking cumulative or do MMA fighters fully recover between rounds?

At UFC 153, Fabio Maldonado took a beatdown from recent light heavyweight title contender Glover Teixeira. Glover dished out a record for power shots landed to the head in a single round by skull-bashing Maldonado 59 times in the first round. For frame of reference, an average light heavyweight lands 6.5 power shots to the head in a five-minute round. 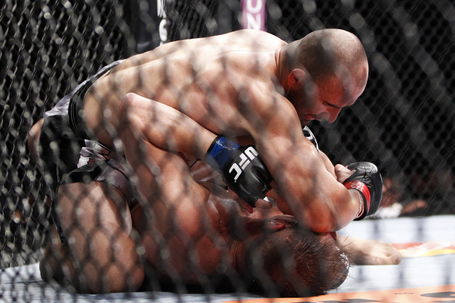 At UFC 141, Nate Diaz cracked Donald Cerrone in the cranium with 34 power shots in the first round and 29 in the second compared to a lightweight average of 5.8 . 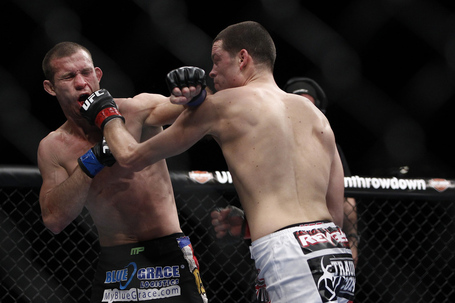 Analytics can't tell us exactly what was going on inside a particular fighter's brain, but we can use it to examine similar situations and see how strikes absorbed in prior rounds tend to impact MMA fighters. Do they matter? Are the effects of strikes cumulative or do they fade and allow fighters to fully recover between rounds?

When you use data to analyze sports, there's a common response from fans and those who work in the industry. It's called a yabut and it goes something like this, "Yabut, judging is more nuanced and subjective than just looking at striking statistics." Or, "Yabut, you can't categorize strikes as just power shots or jabs. There's a wide spectrum of how a strikes affect an opponent."

My response is usually, "Yabut, your yabut can be tested." In many cases, we can use the fight data to see if an objection has merit.

When I wanted to see how judges evaluate a fighter's performance in the cage, Keith Kizer told me he didn't think a model using performance statistics could capture all the nuances of a fight and the subjectivity of judging. I don't blame him. If I weren't a stat-head, I'd be skeptical, too. I told him his statement could be tested. Does the fight data do a good job explaining actual MMA judging decisions? Yes, it does. In fact, many of the preconceived notions people have towards sports can be put to the test with analytics.

Today we're looking at the factors that lead to knockouts. I've been told you can't study knockouts without taking account of the cumulative effect of strikes absorbed throughout a fight. But it turns out that knockouts can be explained pretty well just by looking at what happens during each individual round. So we'll start there, looking at the round-by-round factors that help, hurt or are irrelevant to your chances of getting a knockout. 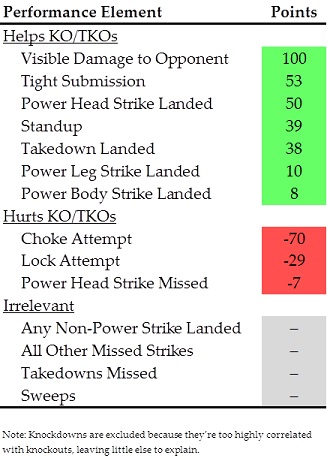 Obviously knocking your opponent down is a great way to get a knockout. When knocking the other guy down at least once during a round, fighters finish that same round with a knockout 55.5% of the time. In the fight game, that's an extremely high correlation so we'll exclude knockdowns for the moment and look at other factors.

At 100 points, busting up your opponent's face goes a long way towards getting a knockout. This should be pretty obvious as it means your shots are doing damage around your opponent's brain.

Another element of knockout performance is tight submissions. These are recorded by FightMetric when a submission attempt is "completely locked-in and was extremely threatening" (Rami Genauer, CEO of FightMetric). They represent close but failed submission attempts, so the fight continues on 100 percent of the time. Tight subs lead to higher knockout odds but the effect likely isn't causal. They probably represent the types of fighters who are able to get threatening submissions but aren't able to finish.

If you're able to get a tight sub, you've exhibited skill, and probably control, in putting your opponent in such a dangerous position. But you've also exhibited limited submission finishing ability and/or encountered solid submission defense from your opponent. Your control and skill may bode well for getting a knockout later in the round while a limited ability to finish submissions leaves more time to potentially finish by TKO. In contrast, regular submission choke and lock attempts lower your odds of getting a knockout because they have a chance of being completed, finishing the fight right then and there.

Does throwing strikes and missing lead to knockouts? Uh...no. Misses can sometimes help get judges decisions, but missed strikes only help get knockouts if they're part of a combo that leads to some other TKO point-scoring action. While most misses are benign, missing with power to the head actually leads to lower odds of getting a knockout, probably because those who miss have worse striking skill, gas out or get desperate.

Standups and takedowns are each worth around 38-39 points towards a knockout, but for different reasons. When you get a standup, you've gone from being on the ground on your back to standing at distance or in the clinch. Unless you're Anderson Silva about to heel kick Yushin Okami, either one of those standing positions is much better than being on your back.

A takedown represents control and putting your opponent in a position that you believe is more advantageous at that moment. It can set you up for ground and pound or help you avoid getting knocked out while standing, each of which increases your knockout odds from what they would have been. 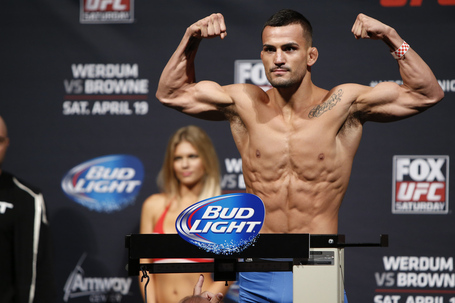 What about someone like Mirsad Bektic? He made his promotional debut on the Fight Pass prelims of UFC on FOX 11 and with 1:25 remaining in the second round, he took two vicious, illegal knees to the head while his right hand was grounded. Here's the GIF courtesy of Zombie Prophet.

Bektic stood up wobbly and visibly dazed - we'd later find out he was also seeing double. Heading into the third round, Joe Rogan wondered about the effect of such strikes, "The real question is, do you ever actually recover from something like that? I mean, if it's an illegal shot and the shot wouldn't have landed in legal circumstances, it changes the entire rest of the fight."

When strikes are legal, does a minute of recovery time between rounds fully clear the cobwebs? While we can't say for sure for any individual fighter, we can test different scenarios across all fighters. Let's see if the cumulative effect of getting beat up in earlier rounds makes it more likely that you're going to get knocked out later on.

We start with cumulative strikes absorbed. Does absorbing more total strikes in previous rounds make you more likely to go to sleep this round? Nope. What about cumulative significant strikes? Still no.

Maybe it's because we're not looking at the head. After all, it's hard to rattle someone's brain with shots to the body and legs - although anyone who's sparred knows that those shots aren't a walk in the park. Does absorbing more cumulative head strikes in previous rounds make you more likely to go out? No. Cumulative power shots to the head have to make you more likely to go nighty-night, right? Wrong.

In fact, you may be less likely to get a knockout when you've landed a larger number of cumulative power shots to your opponent's head in earlier rounds (although this result isn't statistically significant). It could be that landing all those power shots makes you tired, but I think, if anything, it's due to subtle differences in the quality of power shots between fighters. If you've hit someone with a ton of power shots to the head in previous rounds and they're still trucking, then maybe your power shots aren't that powerful ("Hands of Sponge", or your opponent's chin is granite).

Is there anything that builds up in between rounds and makes it more likely your opponent gets knocked out later on? Absolutely - knocking them down or busting up their face. In other words, it's about landing quality power shots. It's the shots with a noticeable impact that don't completely fade between rounds.

When you tag your opponent with quality shots that knock him down, your odds of getting a TKO in a later round increase by 13.1 percent. If you bust up his face this round, you have 9.5 percent higher odds of getting a TKO later. This analysis controls for what actually happens in those later rounds, so the numbers represent the increase in odds that come about solely due to the quality shots you landed earlier.

"Do you ever actually recover from something like that?" - Joe Rogan

It depends on what "that" is, Joe. MMA fighters tend to recover between rounds from all shots, even power shots, so long as they weren't knocked down and didn't have their face busted up. When a fighter gets facially abused or knocked down, it means he took some Seriously Significant Strikes (new phrase FightMetric?), and those don't fade between rounds. Cowboy Cerrone didn't get knocked down or officially damaged by Nate Diaz. But Fabio Maldonado had both happen, making it even more impressive that he soldiered on and was ultimately only stopped by the doctor.

Are there any fight questions you'd like analyzed? Send them to paul.gift@pepperdine.edu or @MMAanalytics on Twitter. Fight data provided by FightMetric.