While MMA Origins has focused heavily on the growth of the UFC, there were other American promotions that held "No Holds Barred" events. T.P. Grant takes a look at the World Combat Championships, a short lived experiment with MMA rules.

MMA Origins is taking a step away from the UFC and Pride focused narratives and taking a look at some of the shorter lived promotions in North America. While smaller and less known, these promotions still played highly important roles an they experimented with rules and developed talent that would end up shaping the sport.

To start this, the series will be stepping back in time from Frank Shamrock's 1999 retirement from the UFC Championship back to Charlotte, North Carolina in 1995 for the World Combat Championships (WCC).

The story of the WCC starts with Christopher Peters, son of Hollywood mover and shaker Jon Peters, who is the executive producer of films such as Caddyshack, An American Werewolf in London, Gorillas in the Mist, Batman Returns and the recent Man of Steel movie.

Christopher was an avid martial arts fan and in 1994 attempted to get involved with Rorion Gracie and Art Davie, and when that failed Christopher went into business for himself. He was able to pull together the finances and Peters planned to host his own No Holds Barred event, and he set about trying pull fighters into his event.

At this point the kickboxing promotion K-1 was well underway in Japan and Peters actually got K-1 stand outs Peter Aerts and Sam Greco to commit to competing. But once the promoters of K-1 realized Peters intended to hold a No Holds Barred event they pulled both fighters.

Undaunted Peters relentlessly pursued a Gracie in his event. His first choice was Rickson, who was looking to make in MMA debut, but his price tag was too high. Peters did come across an ad featuring Renzo Gracie in Black Belt Magazine, and he was quickly on board with the World Combat Championships.

On the administrative side of things, Peters brought in actor and martial artist Bob Wall, and UFC event coordinator Kathy Kidd, who had dated Art Davie but was now involved with vocal UFC critique and Black Belt magazine executive editor Jim Coleman. The relationship did seem to soften Coleman on No Holds Barred fighting and he helped with the promotion of Peter's event.

Coleman had Renzo and Vale featured on October 1995 the cover of his magazine. 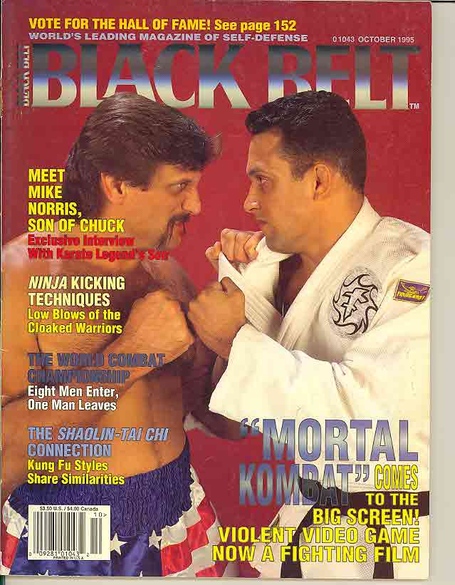 Peters wished to have something that made his product different than the UFC's, so he decided to hold two tournaments, a striker's bracket and a grappler's bracket, and have the winners face each other in a climatic final showdown. The rules would be slightly different in each bracket.

All fights would be 22 minutes long with all strikes and targets being legal. In the grappler's fight there was a 10 minute limit for ground time and submissions were legal. In the striker's divisions all submission holds were illegal and the ground time was limited to two minutes. Fights could end by a fighter tapping out, a knockout, a referee intervention, corner throwing in the towel, or in a judge's decision.

These rules would not be a success, it was a huge burden on the strikers as they took a great deal more punishment than the grapplers in their matches.

The first match of the evening featured Renzo Gracie and Ben Spijkers. There was some tension between two competitors and Renzo earned a quick win as he choked Spijkers out. Renzo then stood, stepping on the head of Spijkers as he walked away, causing a minor uproar. Renzo later apologized for the incident.

Bart Vale had a very hard time with Mike Bitonio. Vale was able to secure an arm triangle after seven grueling minutes. Vale pulled out due to injury and would never win another MMA match in his career. Paulson, entered in the striker's bracket at a Jeet Kune Do fighter, struggle to finish Sean McCully, catching several submissions but was forced to release them.

In the end, it was Renzo Gracie and James Warring in the final, and Renzo was easily able to get the submission victory.

Peters claims the even made money and was planning a second event, but they lost their funding and the WCC died. And while its experimentation with rules was ultimately a failure, it did provide important lessons and is a memorable attempt at shaping how the sport would develop.

To close with here is the full event