Apparently, and unbeknownst to many of it's members I'm sure, the UFC rankings panel has become the ultimate in achievement for fighters, outstripping competitive desire or financial gain.

Share All sharing options for: Michael Johnson thinks that the UFC rankings panel is more important than getting paid

I'll be the first person to stand up and say that I'm not all that convinced that T.J. Grant is still the world's number 3 lightweight. My personal top 4 would probably be some combination of Benson Henderson, Gilbert Melendez, Khabib Nurmagomedov, and Josh Thomson. Not necessarily in that order, but necessarily those fighters. Grant is a very good lightweight, with some solid wins, but the current competitive picture just doesn't really include him. It's been just under a year now since Grant last fought. Lingering symptoms of a concussion, suffered in training have kept him on the sidelines. He has yet to face, let alone beat any of the four fighters mentioned above. All, I'm saying is that 3 might be a little high.

Of course, that's doesn't make Michael Johnsons' insinuation that Grant is "milking" his concussion to stay atop the rankings any less ridiculous. Johnson posted the comment via Twitter. 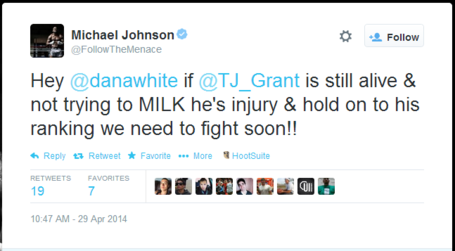 Sanchez tells Ari LeVaux about his evolution as a fighter, a return to his roots, and what the UFC, and Ross Pearson, should expect on June 7.

'Dan had to take me by the scruff between rounds'

Before UFC 172, Jim Miller and his coaches tell Trent Reinsmith what it's like to corner their man, quicksand vs. lightining, brother Dan taking Jim by the scruff during a fight and a cameo from sensei Eddie Bravo.

Diego: I'm resurrecting The Nightmare 'Dan had to take me by the scruff between rounds'

We all know that UFC rankings are a thinly veiled marketing tool to give some extra oomph and narrative to matchmaking. They can help a fighter promote himself a bit better in upcoming fights and provide the UFC with a bit of leverage when it comes time to cut a "guy who's not even in the top ten anymore." But, I can't think of a fighter yet that I've spoken to or heard from that would put his ability to earn a living, let alone just go out and fight, behind his standing in the rankings.

Johnson's got the right idea in some aspect. Call out a notable top fighter, who may be needing a tune up fight soon. It would be a good opportunity for him to jump further up the rankings, and an opportunity for Grant to ease back into the division against a decent, but not elite lightweight. But pushing a narrative that Grant is sitting on the sidelines because that's where he wants to be is a pretty lame way to go about it. Grant is either available to fight or he's not. Once he comes back, a fight against someone like Johnson could make a lot of sense. But until then, maybe looking to a fighter who's been medically cleared to fight would be a better idea.