Werdum vs. Browne Judo Chop: The Importance of the Set-Up

Fabricio Werdum picked Travis Browne apart on the feet in Saturday's UFC on Fox main event. BE's striking specialist Connor Ruebusch breaks down the small details that made his big shots effective, and runs through the difference between techniques and "moves."

Share All sharing options for: Werdum vs. Browne Judo Chop: The Importance of the Set-Up

On Saturday, Fabricio Werdum, of all people, put on a striking clinic in the main event of UFC on Fox 11, taking all five rounds from Travis Browne in impressive fashion. Was his striking flawless? Not at all; in fact, it wasn't even all that pretty to watch, and there's plenty of reason to believe that, while Werdum's win over Browne has earned him a title shot, it hasn't in any way proved that he's capable of outstriking the heavyweight champ Cain Velasquez.

What this fight did prove, however, was the critical importance of set-ups in every phase of fighting.

A day before the event, I published an article here on Bloody Elbow that attempted to analyze the styles of trainers Mike Winkeljohn and Rafael Cordeiro through the lens of their students. Cordeiro is responsible for Werdum, and Winkeljohn trains Travis Browne. In assessing Winkeljohn and his fighter, I made the following assessment: "Wink's guys. . . get beat up, and keep doing what they're doing until it works--or doesn't."

Is that a broad generalization? Yes. Is it, perhaps, a tad harsh? Sure. But is it, as far as any generalization can be, correct? I think that's a pretty resounding "yes." Last weekend, Browne spelled out the limitations of his striking style, and then Fabricio Werdum underlined, highlighted, and drew an attention-grabbing doodle to the side of those limitations.

First, a broad distinction. When it comes to fighting, there are techniques, and there are "moves." Techniques are used all the time. Jab, slip, roll, pivot, round kick, left hook--that's a sequence of techniques right there. Techniques belong together; they work as cohesive parts of a whole style or strategy.

Moves are different. They stand out, and they can be very unpredictable. Moves don't have to be acrobatic, but they have to inspire oohs and aahs, and when they work they invariably wind up on a fighter's highlight reel. They belong in video games, and that's why we love seeing them executed in real live fights.

Fabricio Werdum is a technique fighter. This doesn't mean that his technique is perfect, but his approach to fighting is simple but effective. Werdum has moves--he throws at least one wheel kick per fight when he gets the chance--but they are sparing in comparison to the large number of jabs, crosses, round kicks, and knees, all of which are thrown in sequence and flow off of each other.

Travis Browne is a "move" fighter first and foremost (and he's certainly not alone among Mike Winkeljohn fighters). His attacks are rarely thrown in sequence, and when the are it is clearly a pre-designed sequence. Flying knees, jumping front kicks, wheel kicks, lead rights--Browne throws all of these on a regular basis.

In my pre-fight analysis, I wrote: "The problem with [Browne's] approach is that it relies on the passivity of the opponent to be effective. . . . he is but one example of many Winkeljohn fighters relying on the opponent's complacency to win fights."

The reason for this is that moves, while ostensibly being "unpredictable," are ultimately far easier to read, and far easier to stop. Werdum's moves, as I said, are thrown sparingly, maximizing their chance of surprising the opponent. Browne's attacks, on the other hand, are all huge, dramatic-looking swings. Heck, Werdum doesn't even have great defense, but he knew when to get out of the way of nearly every one of Browne's attacks, and avoid every one of his counters simply by taking a step back.

Moves cannot exist in a vacuum, because fighting isn't a video game or a Kung Fu flick. Despite the fervorous imitation that follows every big "discovery" (e.g. Anderson's front kick or Jones' standing elbows), this sport is not about developing secret moves, but about beating up the opponent, and mankind has known how to do that for a long, long time now.

It's all about the basics.

For contrast's sake, let's take a look at two of Browne's attacks. 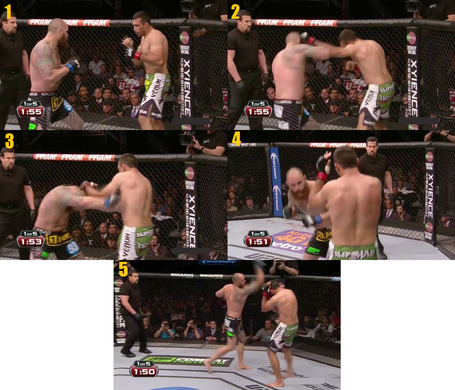 2. Werdum interrupts his attempted right hand (of the exaggerated head-moving variety Winkeljohn prefers) before it starts with a jab.

3. A brief scuffle in the clinch ensues, and both fighters separate.

4. Back at range, Browne takes another drop-step forward.

5. And leads with a long-range right uppercut that Werdum evades by simply backpedalling.

Saturday's UFC on Fox main event is not only a battle between top heavyweight contenders, but one between two of the sport's premier striking trainers. BE's striking specialist Connor Ruebusch breaks down their coaching styles.

Browne consistently leads with his rear hand from very long ranges. Don't get me wrong--there are times to throw a lead right, and even a lead uppercut, but Browne's problem in this exchange, and throughout the fight, was that neither punch was effective. He telegraphed his first right hand by stepping and dropping his weight into it, and then elected to throw a right uppercut. His thought process was clearly that because Werdum expected the right hand, he would be caught off guard by the uppercut, but Werdum had no reason to fear the right hand, and so didn't make any exploitable defensive mistakes trying to stop it. He just backed up. I don't know about you, but frame 4 looks so much like an incoming uppercut that Werdum probably had time to talk to his corner, call in a few outside consultants, and organize a focus group to determine that yes, in fact, that did look like an uppercut and that yes, in fact, he should step away from it.

To take it even further, Browne's lack of success with the initial right hand was due to his lack of a jab. When Browne did throw with his left hand, it was almost always a lead left hook, and the rare jabs were inevitably one-off shots. On the few occasions that Browne did feint the jab or throw a 1-2, he found some success, but he only did this after gassing (and getting badly hurt), and went back to it so infrequently that I have to assume he and his coaches either didn't notice or didn't understand the reasons for his success.

In short, Browne was setting up a guessing game that Fabricio Werdum was under no obligation to play.

Werdum's set-ups were simple, and highly effective. You'll see nothing new or game-changing in the frames below, but you will see some of the fundamentals of striking science being as effective as they've always been. 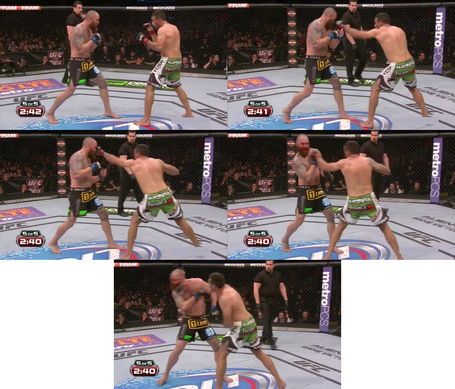 1. Browne advances on Werdum cautiously, and Werdum maintains the distance.

3. Werdum keeps the pressure on, with another flicking jab.

4. And another, causing Browne to turn his head the other way, exposing the left side of his jaw to...

5. ...a tight overhand right from Werdum.

Here, Werdum demonstrates how set-ups are crucial to hiding power shots. He keeps his jab in Browne's face until he finds the positioning he wants for the right hand. These jabs aren't even hard punches--just sharp taps on the nose to keep Browne blind to his opponent's true intentions. Despite the high level of competition he's faced, Browne has still only been competing in martial arts for five years, and his reactions are quite raw. It's difficult to understand unless you've been hit in the face (as I'm sure plenty of you have), but the instinctive reaction is to shut the eyes, flinch, turn away, etc. This instinct can return in full force after four rounds of exhaustive beating--it did for Browne, and Werdum used that to his advantage. As such, Browne never saw the right hand coming.

Werdum also did an excellent job of hiding his right hand in the rhythm of his combination. His three jabs all came on a steady beat, but the right hand was thrown only half a beat after the last jab. So it went: "dum-dum-dum-ba-DUM." I know that seems silly, but a concept like rhythm isn't exactly easy to explain in text. Regardless, Fabricio used the rhythm of his first three strikes to instill a sense of pattern into Browne, only to throw off-pattern with his final punch.

Here's a set-up that could be called "MMA fundamentals"--the fake shot. 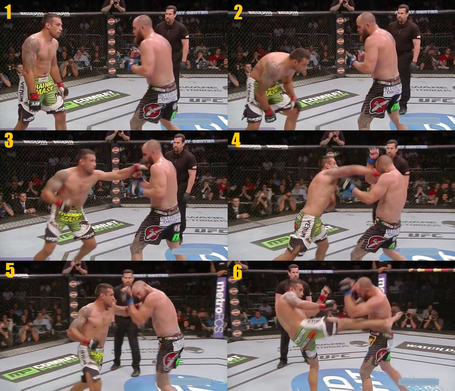 1. Werdum stands in front of Browne, clowning him with his hands at his hips.

2. Now he bends forward, faking a takedown attempt. Werdum moves his left foot forward into striking range as he does this.

3. As Browne begins to react to the perceived takedown, Werdum leaps up with a jab.

5. ...and a rising left hook under the chin. Werdum throws this as a shift punch, bringing his left foot forward and into position for...

6. ...a right kick to the ribs, which lands perfectly as a result of the punches that set it up.

Browne's rudimentary reactions to Werdum's strikes were like a playground for the blooming Brazilian kickboxer. By faking the takedown, he got Browne to lower his hands and bring his head forward, making it a ripe target for his jab. The jab itself served as a set-up for two hard power punches, which themselves served to set up the kick by bringing Browne's guard up and forcing his feet out of position to check.

This is the science of fighting, and Werdum proves that it doesn't take an incredible striker to fight smart. There is a reason that boxers have been throwing jabs and punches in combination for the last century. Fighting unpredictably is less about throwing unorthodox techniques, and more about throwing simple techniques in unexpected ways, using timing footwork, and some mind games too.

For Werdum, it took little more than a few straight punches and some basic footwork to advance him to number one contender status. For Browne, it's back to the drawing board.

For more analysis, as well as fighter and trainer interviews, check out Heavy Hands, the only podcast dedicated to the finer points of face punching. On this week's episode, Connor answers listener questions with boxing trainer Luis Monda.