Saturday's UFC on Fox main event is not only a battle between top heavyweight contenders, but one between two of the sport's premier striking trainers. BE's striking specialist Connor Ruebusch breaks down their coaching styles.

Share All sharing options for: UFC on Fox Judo Chop: Werdum/Cordeiro vs. Browne/Winkeljohn

This Saturday, Travis Browne and Fabricio Werdum fight for the status of number one contender in the heavyweight division. More than that, it represents a clash between two of the most accomplished striking coaches in the sport. Browne, coming in on a three-fight KO streak, represents Mike Winkeljohn of Jackson-Winkeljohn MMA, while Werdum, himself on a three-fight win streak that includes a submission win over Rodrigo Nogueira, represents Rafael Cordeiro of Kings MMA.

Both Winkeljohn and Cordeiro have produced some of MMA's most vaunted strikers. Besides Browne, Winkeljohn trains (or has trained) such standouts as Carlos Condit, John Dodson, and light heavyweight champion Jon Jones. Cordeiro, on the other hand, can claim credit for Wanderlei Silva, Shogun Rua, and Rafael Dos Anjos (also fighting on this weekend's card).

Today we will be taking a look at the styles of these notable trainers through the lens of two of their most successful students.

Winkeljohn (as well as his partner Greg Jackson) prizes unpredictability in his fighters. Anyone who's ever watch Carlos Condit or Jon Jones fight knows that they will throw anything from front kicks to spinning back kicks to standing elbows to flying knees. Travis Browne is no different, and he embodies Wink's love of unpredictability due to his frame: not many 6'7" men have the athleticism, speed, or balance to throw the unorthodox kicks that Browne favors.

Against Alistair Overeem, Browne used the unpredictability of his kicks to stymie the kickboxer until one kick found its mark and knocked him out. 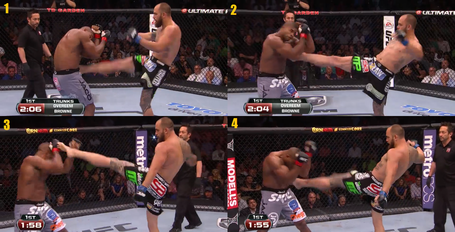 1. Browne stops Overeem's forward momentum with a right front kick to the body.

2. Seconds later he follows up with another one to the chin.

3. After backing Overeem up with some feints, Browne tries for a left kick, this time a roundhouse to Overeem's head.

4. Another left kick, but this one catches Overeem in the gut.

The sheer variety of Browne's kicks makes him a difficult opponent to predict, and per Winkeljohn, he throws them thoughtfully. There is a clear method to his approach, in that a kick to the leg or body will be followed by one to the head, and a kick along one angle will be followed by one from somewhere else. Browne's first two kicks above were thrown from the same leg and with the same arc, but were aimed for different targets. In frames 3 and 4, Browne once again threw kicks from the same leg, but with different trajectories.

Winkeljohn calls his system "tactical striking," and this is clearly why. One or two kicks to different targets might not be hard to predict, but when each of Browne's legs has five or more

The problem with this approach is that it relies on the passivity of the opponent to be effective. You see, Overeem was under no obligation to play Browne's guessing game. Because Winkeljohn's fighters tend to throw for speed rather than power, Overeem almost certainly could have walked through some of Browne's kicks had he not gassed trying to finish Browne early, and then underestimated Browne's accuracy (and overestimated his own defensive skills) at range. In short, Overeem allowed Browne to have his way after his initial onslaught failed, and it went sour for him.

You know who didn't let Browne do what he wanted? This guy. 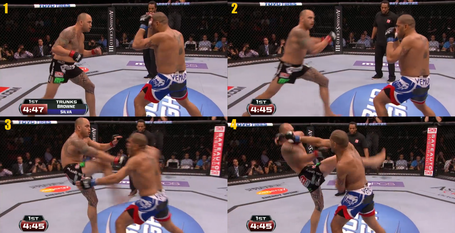 1. Browne feints a step to his left against Antonio "Bigfoot" Silva, who doesn't react.

2. Now Browne actually does step, a huge lunging movement to his left from well outside of striking range.

3. Bigfoot does not step back as Browne had anticipated, instead moving forward, too close for Browne's attempted front kick to land.

After this, Browne's rangy strikes became more sparse, not because Bigfoot had hurt him with the counter punch, but because Bigfoot had reacted aggressively, not with a defense that could be quickly analyzed, pressured, and picked apart. Not much later, Browne would injure himself throwing a lunging right hand only to be melted by a Silva straight right against the fence.

Pacquiao vs. Bradley: Fun with Angles

On Saturday Manny Pacquiao and Tim Bradley fought for the WBO welterweight title. What ensued was a spell-binding clinic in the fascinating subject of southpaw vs. orthodox footwork. BE's striking specialist Connor Ruebusch brings you a breakdown.

Browne is not alone. Rather, he is but one example of many Winkeljohn fighters relying on the opponent's complacency to win fights. Another well-known example: Carlos Condit's knockout of Dong Hyun Kim (GIF). In that bout, Condit's opponent backed away from a slappy front kick, ended up against the fence, and covered up as Condit launched into a picture-perfect flying knee. There's nothing wrong with Condit's technique, but what would have happened if Kim had swung back instead of shelling up? What if, instead of backing into the fence, he had created an angle and stayed in range to counter? Like this: GIF.

This is also part of the reason that so many of Wink's fighters' wins have come through grueling wars of attrition (e.g. Condit vs. Ellenberger, Browne vs. Overeem, Garcia or Jardine vs. Anybody). Winkeljohn strikers often fail to adapt mid-fight when the opponent fights back at every stage. It's not wise to have a style predicated on the opponent either playing right into your hands, or being less tough or in worse condition than you. So Wink's guys (and gals--remember Holm vs. Mathis I) get beat up, and keep doing what they're doing until it works--or doesn't.

Fabricio Werdum may not be known as a striker, but that's been the key to two of his last three wins, one a dominant performance over beloved tough-guy Roy Nelson, and the other a knockout of ground-and-pound specialist Mike Russow. Under Cordeiro's tutelage, Werdum has grown into a very dangerous two, if not quite three-dimensional fighter.

Cordeiro could be called the Freddie Roach of MMA--not that he's produced any Manny Pacquiaos, but because of his love of aggression. Like Roach, Cordeiro's fighters are always vying for control of the pace of the fight. Even when Werdum "boxes" his opponents, circling along the cage as he did against Nelson and Nogueira, it's really just a matter of pacing, conserving his energy until he spots an opening. When he does find a moment to attack, he attacks just the way all of Cordeiro's fighters do--with long strings of varied strikes, usually starting with the hands and ending with a kick or, like Wanderlei Silva and Jake Ellenberger, with a clinch knee. 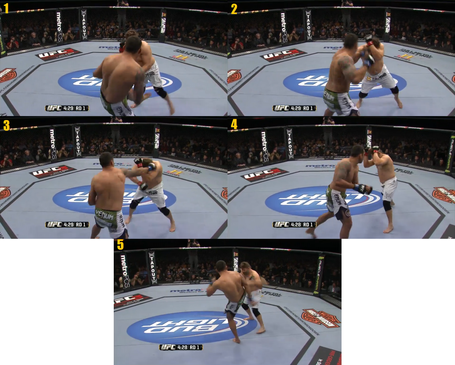 1. Werdum disrupts Nelson's stance with an inside leg kick (one of his new favorite techniques).

2. Nelson covers, and Werdum makes sure his hands stay tight with a probing jab...

3. ...followed immediately by a wide right hand to the ear.

4. Werdum shift-steps into a left hook, but Nelson is already out of range and the punch misses...

5. ...so he uses his momentum to shift onto the other leg and into a hard body kick that catches Roy moving to his left.

This is exactly what Cordeiro fighters are known for. Werdum seamlessly transitions from one strike to another, showing no hesitance to swing and miss, because he knows he can throw another strike, adjusted for range and angle, right after. Werdum either finishes with round kick, which he uses to catch his opponents as they try to circle away at the edge of his range, or if they stop retreating, a high knee. This combination striking is superior to the unorthodox one-off strikes of Winkeljohn's fighters--rather than hoping to react correctly or deciding not to react, the opponents of Cordeiro's fighters are made to feel like no reaction is safe. This is situational adaptability on the fly.

Unfortunately, MMA fans know how Cordeiro's fighters tend to get caught up in their swarming and lose all semblence of defensive awareness. Wanderlei Silva was well known for his tendency to get dropped early in his fights only to come back with a knockout win. Jake Ellenberger has been known to full-on sprint after his retreating opponents in pursuit of the KO punch (GIF). Though it seems to have been tempered somewhat, Werdum has certainly demonstrated this flaw as well, and just like Travis Browne, he's been bitten against a stalwart opponent. Also like Browne, one such opponent of Werdum's happened to be Bigfoot Silva. 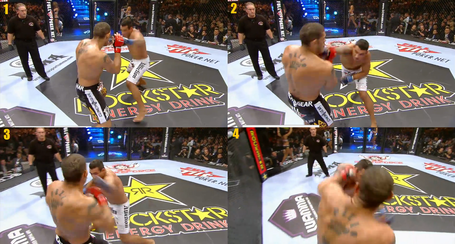 1. Werdum steps in behind a jab.

2. Next a right hand, which falls short.

3. Werdum tries to recover his balance with a left hook, but that too misses the mark, and his feet end up nearly square to Bigfoot.

4. Finally Bigfoot counters with a thudding left hook that all but pushes Werdum to the ground.

Werdum, like Wanderlei Silva before him, seems to have remarkable recovery. I say "seems," because the truth is that, while Werdum may very well be able to take a solid punch, his tendency to go down and yet fight on untroubled isn't a result of chin or resilience so much as a result of not being badly hurt in the first place. Both Werdum and Silva have a tendency to fall so in love with their forward-marching offense that they get hit in un-balanced positions and simply can't stay up. It's not a matter of punch resistance, but of stability.

So who will win Saturday? I have no problem saying that I have absolutely no idea. MMA is a nebulous sport, and its practitioners, perhaps more than any other sport, are known to constantly change and evolve. Three years ago the combat sports community would have laughed at the idea of Fabricio Werdum as a dangerous kickboxer and Travis Browne as a counter-wrestler with a real chance against Cain Velasquez, and yet here we are. In the wild frontier of MMA, however, both Rafael Cordeiro and Mike Winkeljohn seem to have found something that works, and their resumes speak to that. Only time will tell which style is more effective.

For more analysis, as well as fighter and trainer interviews, check out Heavy Hands, the only podcast dedicated to the finer points of face punching. On this week's episode, Connor answers listener questions with boxing trainer Luis Monda.

UFC on FOX 11: Werdum vs. Browne previews, predictions, and prognostications