The UFC's return to Abu Dhabi should raise concerns over the United Arab Emirates' long list of human rights issues instead of awed reactions to the opulence of the region.

Share All sharing options for: Return to Abu Dhabi should raise concerns about human rights issues in country that owns 10% of UFC

This Friday will see the return of the UFC to Abu Dhabi with UFC Fight Night: Nogueira vs Nelson. The event marks the first UFC card in the capital of the United Arab Emirates since UFC 112 in April of 2010. That event followed the purchase of 10% of the UFC by Flash Entertainment, a subsidiary of Abu Dhabi's government. 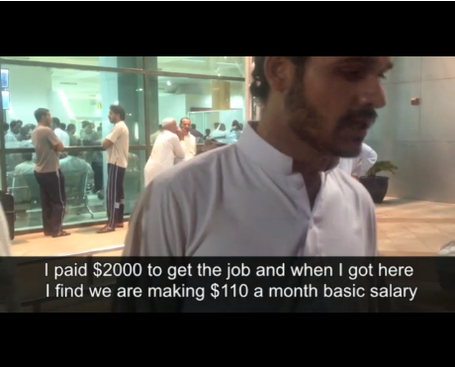 Abu Dhabi came under fire last year for reports on exploitation and human rights abuses of migrant workers in massive projects such as the Abu Dhabi Louvre (the first Louvre built outside France) and the Guggenheim. The reports covered issues such as companies taking worker passports so unhappy laborers are not able to leave the country, workers living in awful conditions (some basically living as neighbors to human waste dumps with ten or more men sharing one small room) and workers who complain about conditions being punished via physical abuse or being held without pay for months prior to deportation.

An investigation in The Guardian detailed many of these stories. Tales of men who either pay recruitment fees up front, or who owe recruiters after beginning jobs -- many lured by promotional videos that show sprawling, gorgeous conditions for the workers -- and face almost insurmountable odds against making any money.

Such is the story of Hamdan:

Hamdan is from the mountains of Pakistan. His face is worn with care. He paid $1,624 (£1,000) to a Pakistani recruiter who told him he would have a job with the UAE's largest construction firm, Arabtec, as "a carpenter in Dubai", earning between $217 and $300 a month. When he arrived in Dubai, he was placed in a vast industrial zone outside the city, where he learned he would be working six days a week on the "museum site" in Abu Dhabi, earning just $160 a month. Arabtec had already taken his passport and he was trapped. His only choice was to work for 10 months – 11 hours a day, with an extra two hours' travel time, to repay the agent before he could start to save anything for his family.

"They cheat us," he says. "I would tell anyone not to come here." Beside him sits another Arabtec worker, "Omar". He says he was assaulted by a camp boss just days earlier, after they discovered he had made a complaint to the police. "He was very angry. He hit me hard in the chest and he said: 'You never go the police. Not even if you are being killed. Never'."

Living conditions for migrant workers elsewhere can be even worse. The Observer followed one bus coming out of the New York University construction site, the only non-TDIC project on Saadiyat. It led to a filthy, overcrowded camp housing 43 Bangladeshi workers at the heart of the polluted, industrial Musaffah area, next to car repair and welding businesses. There the men, hired to paint the campus, complained of being trapped by recruitment fees that exceeded a year's salary and of the high cost of even the most basic healthcare. Some, hired from myriad unregulated subcontractors, had to pay for their own work clothes on a salary of £149 a month.

The findings were not shocking. Reports from the Human Rights Watch (HRW) outlined similar issues with migrant worker abuses in the United Arab Emirates.

The Federal Supreme Court has upheld a husband’s right to "chastise" his wife and children with physical abuse. - Human Rights Watch

The HRW report also details issues such as prison sentences for government defined "cyber crimes" defined by the government as " from criticism of the UAE’s rulers to calling for unlicensed demonstrations," torture of prisoners, sexual abuse of female migrant workers as well as massive issues with women's rights:

The law further discriminates against women by permitting Emirati men, but not women, to have as many as four polygamous marriages and forbidding Muslim women, but not men, from marrying non-Muslims. As a result of a 2011 proposal to allow Emirati women married to foreigners to pass their citizenship to their children, the Interior Ministry granted Emirati citizenship to over 2,000 children of Emirati women in 2012 and identified a total of 5,000 individuals who may be eligible for citizenship.

Despite the existence of shelters and hotlines to help protect women, domestic violence remains a pervasive problem. The penal code gives men the legal right to discipline their wives and children, including through the use of physical violence. The Federal Supreme Court has upheld a husband’s right to "chastise" his wife and children with physical abuse.

The myriad issues in UAE have led to the country attaining a ranking of "not free" from Freedom House.

Wednesday saw UFC president Dana White confirm that the stadium for Friday was, again, a one night only situation:

White says just like the last time, they’re building a stadium in Abu Dhabi for UFC and they’re going to tear it down once UFC leaves.

Bloody Elbow reached out to the UFC to clarify what kind of labor would be used in the preparation and execution of the event, from stadium building to tear down.

The troubling part of the statement is that it means little. Flash is owned by Abu Dhabi. The standards in the country for construction projects are established, and those standards are low. Who would crack down on Flash if there were issues with the "industry standards" anyways?

A member of Abu Dhabi's ruling family has been found innocent of the torture and rape of an Afghan man, despite the presence of a 45-minute tape that allegedly shows his role in the torture.

Sheikh Issa bin Zayed al-Nahyan, the president's brother and son of the founder of the United Arab Emirates, appeared to have been filmed taking part in a violent beating of Mohammed Shah Poor, a grain farmer from Afghanistan.

Somehow, Al Nahyan was not found guilty and the men who he allegedly told to video tape the torture were sentenced to jail time after it was claimed that they drugged him and orchestrated the situation in an extortion attempt.

Human Rights Watch and the U.S. State Department met the verdict with criticism.

Excerpts of the video can be viewed here. It should be noted that it is difficult to watch:

This is, of course, not to say with any certainty that the construction has involved the same types of abuses outlined in the Guardian report. But rather, to suggest that the situation should demand more clarification on the actual worker conditions as relates to the project.

Especially when one considers the length of time such human rights abuses have gone unchecked in the region.

The largest percentage owner in the UFC not named Fertitta not only condemns homosexuality, but actively carries out severe punishment of homosexuals.

It should be noted that Abu Dhabi's purchase of 10% of the UFC resulted in Dana White's share of the company being knocked down to 9%. Thus, Abu Dhabi is a larger partner in the promotion than White.

Abu Dhabi is also the capital of a country that outlaws homosexuality. Thus, the largest percentage owner in the UFC not named Fertitta not only condemns homosexuality, but actively carries out severe punishment of homosexuals.

One of the most well known examples was the arrest of 26 men participating in a form of homosexual marriage ceremony in an Abu Dhabi hotel in 2005.

Mohammed Nukhaira Al Dhahiri, then and current Minister of Justice, was quoted at the time, "There will be no room for homosexual and queer acts in the UAE. Our society does not accept queer behaviour, either in word or in action."

More disturbing than Al Dhahiri's statement was the reaction from the Interior Ministry, which suggested the use of hormone treatment to "correct" the prisoners:

The arrested men have been questioned by police and were undergoing psychological evaluations Saturday. Azouri said the Interior Ministry’s department of social support would try to direct the men away from homosexual behavior — using methods including male hormone treatments, if the men are found to be deficient.

"Because they’ve put society at risk they will be given the necessary treatment, from male hormone injections to psychological therapies," he said. "It wasn’t just a homosexual act. Now we’re dealing with a kind of marriage. There was a ritual involved."

Foreigners arrested will be deported after serving any sentences imposed in court, he said.

Anti-gay laws remain in effect with quite significant punishments throughout the UAE. You can even end up on trial in the UAE for giving a "gay handshake."

Also worth noting is the UAE's history of jailing women who have been raped for having sex outside of marriage.

With the focus on issues such as LGBT rights, worker safety and other human rights concerns raised over Russia's hosting of the Olympics earlier this year, it's hard to believe that so little attention has been paid to the UFC not only holding an event in Abu Dhabi, but the emirate owning 10% of the entire organization.

Then again, they have a lot of money...and man, aren't all those fancy buildings quite the sight to behold?