Sunday's Brazil card was in many ways the perfect Brazil card. Controversy, upsets, knockouts--Fight Night 38 had it all, and a surprising amount of subtlety too. BE's striking specialist Connor Ruebusch takes a look at the smaller details that made the big finishes happen.

The UFC's first attempt at a Sunday show (at least in a long time) was quite successful, if I do say so myself. In particular, it was successful at delivering more upsets than any other card in recent memory, two controversial referee point deductions, and a whole lot of finishes. So basically, it was a Brazil card.

In this edition of the Tech Recap, it's all about positioning. Positioning determines everything in a fight: can you hit the opponent? can he hit you? will you be hurt by the strike? will he? In short, the position of one fighter relative to that of his opponent makes a huge difference, and so the best fighters are often those who excel at manipulating position. Let's look at a few examples.

In MMA, we see a lot of fighters creating distance with their feet. If you pay close attention, you'll see it in at least half the fights on every card: one fighter throws a jab, and the other reacts by leaping four arm-lengths away. Granted, there are fighters who use their feet intelligently, to create openings and avoid being hit, but there are times when more subtle movements are best.

Cue CB Dollaway, MMA's Hephaestus, whose grisly visage is merely a mask obscuring the surprising depth of his craft and skill. Last weekend he picked apart the heavily favored (for some reason) Cezar Ferreira with perfect timing and newly refined boxing. Even better, he kept a cool head under pressure, and didn't poke Ferreira in the eyes even once. Take a look. 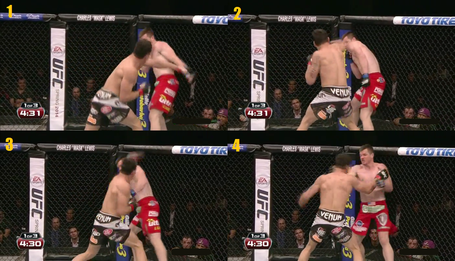 1. Ferreira backs Dollaway up to the cage and throws a wild left hand. Dollaway leans back over his right hip and the punch goes sailing by.

2. Now a right hook from Ferreira--Dollaway pulls back a little farther and avoids that one, too.

3. Ferreira throws another left. This one glances off Dollaway's shoulder.

4. As Ferreira loads up on another left hand, Dollaway cracks him with the first of a three punch combination, a short right hook to the jaw.

This is a great example of the seemingly paradoxical game that upper body positioning can play with distance. How is it that a lead hook and a cross from one fighter could fall short, while the other fighter, without moving his feet, could be in range to connect with a short, rear hand hook?

Johny Hendricks and Robbie Lawler set an all-time record for strikes landed in a title fight, so how on earth did they stay standing? BE's striking specialist Connor Ruebusch examines UFC 171 and the science behind successfully taking a shot.

UFC 171 Tech Recap: How to Take a Punch Hendricks' Coach: 'He's better than they realize'

For one, both fighters were in position with their feet to hit one another, but Ferreira lost control of his balance. Swinging wild like that, Ferreira threw himself past his feet, and gave Dollaway enough of a telegraph that he hardly needed to adjust at all to avoid the strikes. Dollaway simply kept his head over his right leg, and waited for the opening. As Ferreira's head drifted forward, Dollaway waited for him to miss on one big shot and stop throwing. Ferreira's final left hand connecting with Dollaway's shoulder was enough to do it, and as the Brazilian attempted to reset and regain his balance, Dollaway simply rocked forward in his stance a few inches and placed one on his jaw.

Upper body positioning relies on making changes within the stance. Dollaway was able to keep his feet stationary, but still make Ferreira miss by adjusting his hips and knees. And because his feet hadn't moved, it was a simple thing to lean forward and drop Ferreira the moment he was vulnerable.

I did say that foot positioning was important too, and there were two examples on Sunday's card of very MMA-specific footwork. First was a bout that, despite a point deduction and many cries of "boring", I found to be very interesting. Norman Parke fought a game Leonardo Santos in a bout that took place almost entirely in the pocket, or on the inside. Parke showed off some impressive in-fighting skills, while Santos showed off some impressive striking and takedown defense. What stood out the most, however, was Santos' complete inability to control Parke in the clinch. 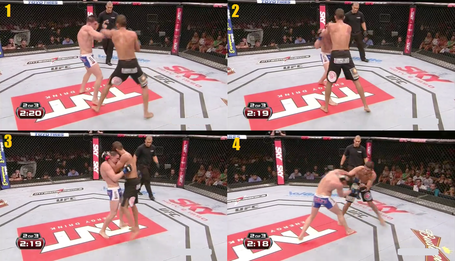 1. Santos steps to the outside of Parke's left foot and pops him with a jab.

2. As Parke covers up, Santos wraps both hands behind his neck, securing a double collar tie.

3. Parke shifts his weight from his right leg to his left, lifting Santos' off the ground in the process.

4. As he sets Santos down, Parke senses a weakness in his balance, and simply shucks him off.

Now how might Leonardo Santos achieve dominant foot position and the most dominant Thai clinch position, and yet fail to hurt or even control Norman Parke, who doesn't even bother to fight his grips or grab any kind of counter clinch of his own?

The answer is that fighting is complicated, and dominant positioning is not so simple as "get your foot past his and pull down on his head with both hands." Any submission grappler will tell you that mount is only the most dominant position on the ground if you know how to maintain it, and if you don't, a competent grappler will have you on your back struggling to retain half guard in a split second. In this case, Parke had a stronger stance than Santos. In the Thai clinch, fighters are taught to square their hips in order to keep from being thrown and to bring both knees into play. But by keeping his lowered, wider stance, Parke was able to get one foot under Santos' base and still have another foot behind him. When he threw his weight toward this rear foot, Santos was left hanging from his neck like a kid from a tree branch, and lost all control of the situation.

Dominant positions are only dominant if you understand the mechanics behind them.

Finally, I can't recap this card without covering the unbelievable knockout in the main event. After enduring two rounds of shellacking from Shogun Rua, Dan Henderson did something that he probably should have been doing for the past five years--he used his wrestling. And though he failed to take Shogun down, he created the opening for his devastating right hand. 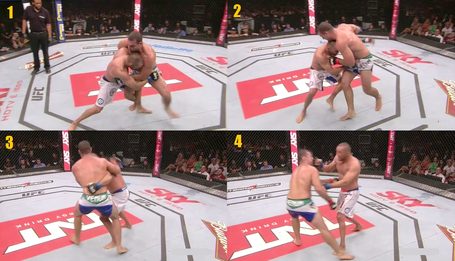 1. Hendo tries for an outside trip from a loose over-under clinch.

2. Shogun untangles his right leg from Dan's left, and begins to pivot, letting Dan's momentum carry him past.

3. But Henderson also executes a tight pivot, keeping himself glued to Shogun by way of his underhook. He continues Shogun's pivot for him, planting his right foot and hucking Shogun into the path of his right hand.

4. As the thunderous punch connects, Shogun's position is completely compromised, and he can do nothing but topple.

The final frame of this sequence shows Henderson in a perfect position to land his right hand. He is perfectly facing Rua's centerline, while Shogun himself has no base to absorb the blow. Forced into an unnatural stance and unable to plant his own rear foot to take the shock of impact, Shogun reeled backward, his nose crumpled like tin foil by Hendo's fist. The fact that Henderson found this position in the middle of a reactive, swirling clinch battle is a testament to his timing and his experience. Watching the GIF, you can see the balance and weight transfer that make him such a dangerous puncher.

If only he'd started fighting in transitions sooner.