Slideyfoot is back, sharing pointers on how to keep someone pinned with side control.

Continuing with our position of the month for February at Artemis BJJ, the next topic was maintaining side control. I kicked off with the conceptual framework John described to me when I visited Texas back in 2012. The primary control points are the hips and the triangle of shoulders and head, secondary control is inside the knees and elbows, then finally tertiary control relates to the wrists and ankles. John goes into more detail over on this thread. I think it's helpful to have that framework at the start, as then the students can hopefully see how that principle filters through everything we'll be training that day.

A particularly effective method of control is applying a cross face. If you're not familiar with the term, that starts by bringing your near side arm under their head. I like to reach right to their far armpit and anchor my arm there, either by cupping their armpit or by getting a hold of whatever gi material is in range. From that position, you can then drive your shoulder and/or arm into the side of their head or neck (what SBG call the ‘shoulder of justice'), aiming to get their head to turn away from you and/or generate some choking pressure to distract them.

If they can't turn their head back towards you due to the shoulder pressure, it will make it much harder for them to create space and escape. Their head is stuck: "where the head goes, the body follows" is an old adage and a true one. This also means that you've now hit three of those primary control points. You're using your shoulder to dominate the head, your hand is preventing them lifting their far shoulder, while you're also pinning their near shoulder with your body.

If you shift your shoulder from their face to their neck, that choking pressure can also open up opportunities to switch to mount or possibly initiate a submission attempt. However, it does mean they can probably turn their head again, which improves their escape opportunities. 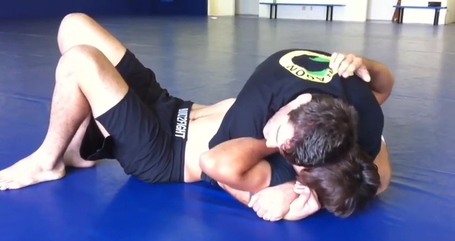 Next, it is a good idea to deal with their far arm. Reach under the far elbow with your free arm, where you can also go to the armpit depending on your preferred control. You have few options here. Option one is linking your hands together with a gable grip and sucking them in towards you, providing a very tight side control. This is how my old training partner Tran advised I hold side control back in 2008. Option two is gripping around their shoulder and lifting it off the mat, as my fellow Artemis BJJ co-founder Dónal likes to do. For a third option, bring that arm lower and use the elbow to squeeze into their far hip, helping you establish a block on another of those control points.

I also like to emphasise chest position. Picture an imaginary line between the middle of their chest and also between yours. You want to bisect those lines: don't be too far over your partner, or they can easily roll you (if they DO try and roll you and it's working, use your far arm or your forehead for base). Too far back, and it's easier for them to slip out and escape.

Moving on to the legs, there are a bunch of different things you can do. I used to prefer to bring both knees in tight, but I later started sprawling the leg nearer the head backwards, which enables me to bring my hips much lower. This is key: you must keep your hips low in side control. If your knees are in tight, widen them if your hips are still high. Whenever you're on top, you don't want to leave them any space.

The lower the hips, the more weight will press into them, which therefore gives you better control. However, if you have both legs sprawled back, there is a chance they might be able to bring their knee inside and recover guard. To prevent that from happening, block that knee either by angling your hip down, shoving your knee into their hip or putting your hand there. Play around and see which position you like, remaining ready to switch depending on your partner's movement.

If you're sprawling your legs back, your knees should be off the ground, staying on your toes. This helps with mobility and driving forward. Although it can be tempting to just seize up in side control, you have to keep moving. Otherwise, you aren't reacting to your opponent and they're eventually going to escape. The "it's better to bend than to break" cliché comes to mind.

That transitional, mobile element to the position can be seen in Saulo's hip-to-hip side control, which he shows on Jiu Jitsu Revolution. He has his hip glued to theirs throughout, which maximizes pressure by driving all his weight through the point of his hip. This is a good general principle, particularly if you're small like me. As they move, move with them, keeping your legs sprawled back. Your elbow is across their body, blocking their other hip. Be careful of pinching that in too forcefully, as doing so may help them initiate an escape where they roll you over their body.

Your weight should constantly be on them rather than the mat because of your sprawl: stay on your toes, instead of touching the floor with your legs or knees. You can also reverse, turning your hips in the other direction, so that you're now facing their legs. Control their far arm by reaching under their far shoulder, shifting your pressing hip up towards their near shoulder. Again, this drives your weight through the point of your hip, but this time into their near armpit.

From here, you can also switch to the other side of their body, which can be a useful option if you feel your control slipping. Walk your feet around to north-south, then continue walking until you can establish the same hip-to-hip position as before.

Here is a video of Xande Ribeiro teaching the Ribeiro side control.

Controlling Side Control Concepts with Xande Ribeiro (BJJLIBRARY.COM) (via BJJLibrary)

Can Sönmez began training in 2006 at the Roger Gracie Academy in London, UK. He received his purple belt from Roger Gracie and Kev Capel in March 2011. Can now teaches at Artemis BJJ in Bristol, still regularly travelling up to Aylesbury to train with his instructor, Kev Capel. Along with Artemis BJJ and his blog on slideyfoot.com, Can also runs GrappleThon.org, a hub for charity grappling marathons all over the world.