Jon Jones on Dan Henderson being a contender: 'Oh give me a break'

Despite Henderson's win over Shogun at the latest UFC Fight Night, the 205 lb. champ dismisses his chances at becoming a challenger to the light heavyweight throne.

Share All sharing options for: Jon Jones on Dan Henderson being a contender: 'Oh give me a break'

On Sunday night, Dan Henderson removed any controversy from his UFC 139 win over Mauricio Rua. In the main event of UFC Fight Night: Shogun vs. Henderson 2 out of Natal, Brazil, Henderson came back after losing the first two rounds to knockout Rua within the first two minutes of the third round.

Following the night's action, an impressed MMA fan told light heavyweight champion Jon Jones that Henderson was on the road to a title shot. Jones responded: 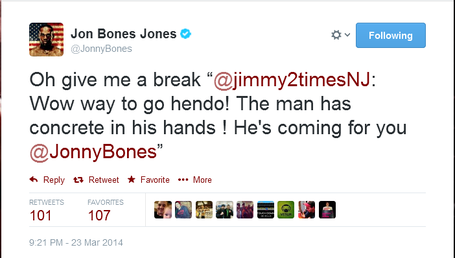 Shortly after posting, Jones deleted this tweet. He and Henderson were scheduled to fight after the latter's last fight with Shogun. However, an injury cancelled the UFC 151 main event and the show altogether. Sunday's victory was Hendo's first in four fights since missing out on his third chance to claim UFC gold.

Jon Jones is set to face Glover Teixeira for his seventh title defense at UFC 172. That event will take place at Baltimore Arena in Baltimore, MD.