Last Saturday, Johny Hendricks and Robbie Lawler showed why they are truly world class fighters. With grit and determination, both men came back from adversity several times throughout the fight, refusing to fold, to be stifled, or to let their chance at the title slip through their fingers. It was a fight that, unlike many exciting bouts, was not characterized by the number of mistakes made, but by how well each man capitalized on the few that were.

Today, we'll be looking at the key moments and exchanges from rounds 3-5 of this epic battle of wills and skills. If you missed the first part of this breakdown, you can find it right here. Otherwise, read on.

This is Pivotal Moments: Hendricks vs. Lawler.

Robbie Lawler came into the third round knowing he needed to change the course of the fight. Aside from some moments of spotty success in the second round (GIF), the fight was pulling away from him. As the third began, Hendricks was still holding the reins, leading more, landing effective offense, and forcing Lawler to defend. One punch changed it all. 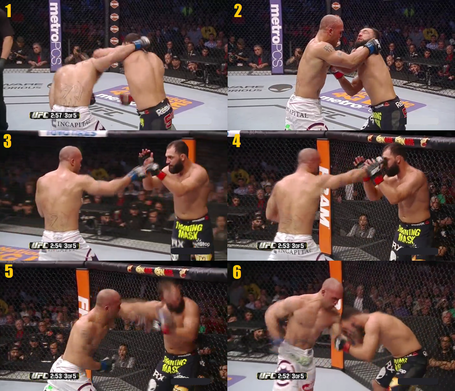 1. Hendricks throws a wide overhand left, and Robbie responds with one of his favorite techniques: he rolls with the punch and attempts to follow it with a right hook over the top.

2. The hook misses, but Lawler cleverly turns the failed punch into a collar tie, holding Hendricks' head in place with his right hand while his left connects with a vicious uppercut that nearly sends Hendricks' skull into the rafters.

3. Hendricks backs away wearing a thousand yard stare, and Robbie keeps him on the defensive with a pawing jab.

4. After a few paws, Robbie pops Hendricks with a stiff jab to the nose: pet, pet, SLAP.

5. Hendricks is so stunned by the change in rhythm that he eats a vicious left cross. He struggles to stay standing.

6. Lawler does not wait. As Hendricks folds over he peppers him with a hook and a well placed left uppercut.

Lawler pursued Hendricks for the rest of the third round after this moment of resounding success, and seemed to have found the key to beating Hendricks. He would counter Hendricks' left with his right hook or uppercut. Whether it was successful or not, he would capitalize on Hendricks' tendency to overcommit his weight by twisting back into a left uppercut or short left cross (GIF). Several exchanges ended this way, with Hendricks wading into the fray to steal the momentum back from his opponent, only to lean right into a left hand buried two or three shots into a combination from Lawler.

This exchange is demonstrative of all that is truly possible under the Unified Rules of MMA. In boxing, holding and hitting is illegal. A boxer is not allowed to turn his failed punch into a wrestling success. But in mixed martial arts we are treated to the true depth of possibilities that exist in a fight. Lawler showed his veteran guile in capitalizing on this brief window of opportunity: no matter that his punch missed, he wasn't about to let Hendricks escape unscathed now that he had his hands on him.

Though Hendricks staged one of many comebacks in the second half of the third round, and survived the onslaught of one of MMA's most ferocious hitters, Lawler more or less maintained control of the fight as a whole. Going into the fourth, he continued to dominate. It's difficult to come up with one moment that defined the fourth round and kept the fight in Lawler's hands, but there was certainly one technique that featured prominently. 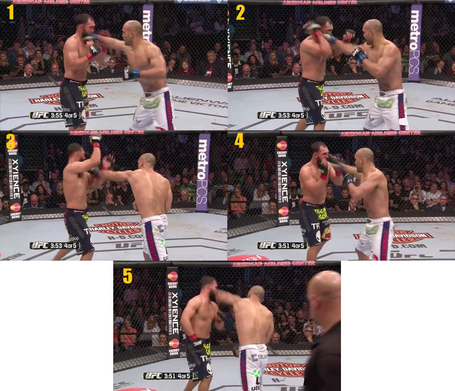 1. Lawler throws a stiff jab that catches Johny just on the end of its reach.

2. A step forward, and another jab. Hendricks parries this one into his raised right arm. He expects a left hand to follow, but none does.

3. Just kidding. After a moment's hesitation, Lawler pops Hendricks with a cross, thrown just as Hendricks relaxes his guard.

4. Hendricks shows that he still doesn't always react well to being hit. He tilts his head as if to say "Okay, you got me," and shuffles his feet, resetting his position. Lawler doesn't wait for him to finish, leading with a flicking jab...

5. ...and and immediate left hand. Hendricks' hands are down and his feet unset. The simple 1-2 has the desired effect.

By the mid-point of round 4, it was clear that Lawler no longer had the energy to put a sustained beating on Hendricks, but he knew he needed to continue pressing Bigg Rigg to prevent him from earning any more rounds. The jab was his key. Requiring very little energy to throw, a jab is a perfect weapon to keep an already hesitant opponent hesitant, and to punish him safely when he works up the nerve to fire back. By relying on his jab, both as a lead and as a set-up to power shots, Lawler was able to create enough volume to keep Hendricks from rallying.

This also allowed Lawler to conserve his energy for some few truly powerful punches. Working in spurts, and using his jab to coast while he recovered between flurries, Lawler either prevented Hendricks from getting his shots off, or hurt him badly for attempting to do so: GIF.

Lawler carried his striking dominance into the fifth round, and appeared to be well on his way to a decision victory, or even a late KO. One right hook in particular looked for a moment to be the fight-ending shot (GIF), but Hendricks showed that he is made of the stuff of champions. I don't hyperbolize when I say that a lesser man would have been finished by Lawler. I use the phrase "lesser man" deliberately, as well. It wasn't a question of chin. No doubt Hendricks has one made of iron, but there are plenty of fighters with better chins that would have fallen to Lawler's relentless onslaught.

This was a case of one fighter simply refusing to be finished. Despite being out on his feet in the third, and badly hurt several times through the fourth and the start of the fifth round, Hendricks refused to be put away. After being dazed by yet another terrific combination from Lawler, Hendricks surged. 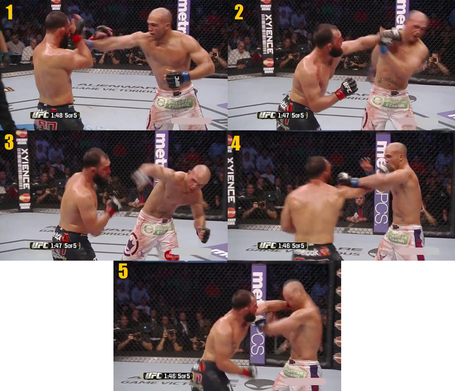 1. As Hendricks marches forward, Lawler throws a tired jab out to stop his momentum.

2. Lawler's head drifts forward on his jab, and he's too fatigued to pull back immediately. With perfect timing, Hendricks blocks the jab with his right forearm and smashes Lawler with a hard cross.

3. Lawler is pushed back by the shot, and his wild right hook misses by a mile.

4. Hendricks pins the retreating Lawler in place with a stiff jab. Lawler reaches out to prevent the punch too late and ends up square to his aggressor.

5. Hendricks attacks Lawler's exposed center line, blasting him with another left that sends him stumbling.

Hendricks landed more shots after this, and better ones, but this was the combination that turned the tide. After this, Lawler couldn't muster the energy to counter Hendricks with anything of real meaning, and fell into a completely defensive attitude, one which failed to nullify Hendricks' offense because it gave him no reason to stop throwing.

Above, you see the result of two things coming together: sheer force of will, and smart training. It's clear that Hendricks is an indomitable force when he wants to be. Faced with the imminent (and quite likely tempting) threat of losing, Hendricks bit down on his mouthguard and waded forward. Once more into the breach, Hendricks sallied forth and broke through Lawler's attack, hurting him with one shot after the other until the Ruthless One could do little but tuck his chin and wince. Hendricks' training shows in the manner through which he found this opening. Lawler's jab was thrown lazily, and Hendricks did not waste any time in countering it.

I've said it before, and I'll say it many more times: defense is only effective if it leads to offense. Hendricks didn't merely block a jab. He blocked a jab, saw an overextended, tired opponent, and leapt on his chance. It paid off.

Earlier this year I declared Machida vs. Mousasi the best fight of 2014. Despite the fact that Machida is my favorite fighter, this one supplants it. Not only were we treated to the rare spectacle of an inside MMA boxing match, with both men refusing to concede ground to the opponent, but we witnessed true heart and determination, and that's the one thing that makes all truly great fights great.

It is yet unclear what's next for either of these fighters, but with this performance they each won a lifelong fan in me.

Come back tomorrow for the Technique Recap of UFC 171, in which I will focus on the techniques and strategies of the undercard fighters, as well as an exclusive, technique-focused interview with Johny Hendricks' striking coach Steven Wright. Don't miss it!