Many believe that finishes--knockouts, submissions, and stoppages--are the reason that combat sports exist. Indeed, history's most beloved fighters have almost invariably been those who sought, at all turns, to win their contests absolutely; there is no arguing the legitimacy of the win when one man is left standing and the other on his back.

But I do not believe that combat sports exist merely to satisfy our primal hunger for violence. It's not the ability of a fighter to finish that compels us to watch, but the refusal to be finished. The greatest and most memorable fights in history, not the amount of blood spilled. The will to not only survive but to overcome is the one factor that decides whether a fight will be remembered in ten years, or forgotten in one.

Last weekend we were certainly treated to a great fight. Through five rounds, Robbie Lawler and Johny Hendricks were the principle actors in a violent play that had fans like me shaking and shouting with anticipation for a half hour straight. Their narrative was one rife with technique, drama, and more than a few unexpectedly sudden momentum swings. Today we're celebrating the moments that defined this great contest of will and skill, and the techniques and strategies that created them.

This is Pivotal Moments: Hendricks vs. Lawler.

Round one, the slowest of the fight by far, still told us a lot about the fighters, and each fighter told the other a lot about himself. The very first sequence of the fight, in fact, was a telling one. 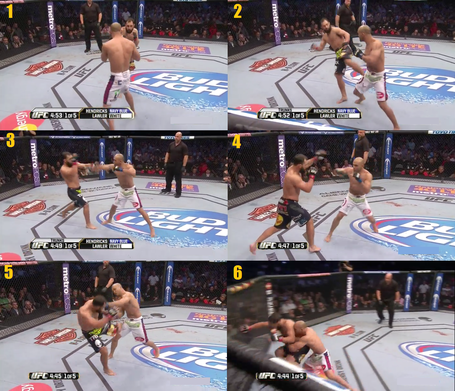 1. Lawler circles to his right, bouncing back and forth, light on his feet.

2. As Lawler turns, revealing his right hamstring to Hendricks, Bigg Rigg nails him with a solid low kick. His positioning is near perfect: Lawler is neither close enough nor at the correct angle to counter, and must eat the kick.

4. A feinted jab from Lawler prompts another parry.

5. Hopping back and forth, Lawler gives Hendricks his rhythm, and Hendricks counters the next jab with a low kick. Except it's not a jab, it's a lead left, and Lawler jams the kick by stepping to his right and sitting down onto the cross.

6. More off-balanced than stunned, Hendricks hurtles into the fence with Lawler hot on his heels, landing left uppercuts through his armpit.

If you've followed the careers of these two men up to this fight, two things stick out about this exchange: 1) when did Hendricks learn to kick like that? and 2) this is exactly how Robbie Lawler fights, but smoother than ever.

Robbie Lawler just might be the most unlikely title challenger ever, and yet he's got the necessary skills to become the UFC's new welterweight champ. BE's striking specialist Connor Ruebusch breaks down his wily veteran ways.

From the get-go Hendricks shows Lawler that he's capable of exploiting that one defensive hole that has plagued the Ruthless one throughout his career, Robbie's weakness to leg kicks. Hendricks is not known for his kicking game. In fact, in the past his kicks have looked downright ineffectual. But the work has been put in, and Hendricks times the first one perfectly. Catching the opponent as he circles will have the ultimate effect of either convincing him not to circle, or preventing him from doing so as smoothly by hurting his leg.

Lawler, for his part, responded perfectly. His use of rhythm really needs to be seen to be appreciated, so watch the GIF if you're able. As he pushes forward behind his southpaw jab, Lawler establishes a nice relaxed rhythm. Two beats, a shuffle step, and then a jab. Two times in a row he executes this same pattern. The first jab is intended to land, but misses. The second is merely a feint. The third, the one that Hendricks expects and tries to counter with his leg kick, doesn't come at all. Instead of shuffling forward into the jab, this time Lawler simply places his right foot down and pops Hendricks with a short left hand.

Notice the difference in foot position between frames 2 and 5. In frame 2, Hendricks has the perfect angle for his kick. His right foot is just slightly to the inside of Lawler's, just enough so that he has room to open his hips and land a hard kick. In frame 5, Lawler's foot is much farther forward, deeper within Johny's stance, and Robbie's step to Johny's left has taken away the space the kick needs to generate power. And, because Robbie sits down well on his left hand, with a nice bend in the knees, Johny's kick doesn't have the desired perpendicular surface as a target. His kick just sort of bumps into the top of Lawler's knee and slides up his thigh to his hip. When Lawler's punch connects, Johny is thrown off balance and stumbles backward, while Robbie proves that he's willing to pounce on every opportunity.

So the first minute of the first round, like the overture at the start of a play, gives us an idea of the story of the fight to come. Hendricks shows his evolution as a striker, unveiling a weapon he has never shown before with improved timing and defense, and Lawler responds emphatically, letting Johny know that he is not content to be picked apart with kicks, and is quite willing to hurt the man who seeks to do so.

Hendricks continued to show the fruits of his development in the second round, with greater success. 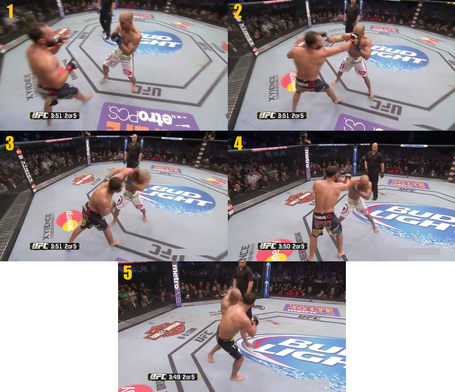 1. With his back to the fence, Hendricks takes a step forward.

2. Hendricks doesn't throw so much as pushes a jab into the face of Robbie Lawler.

3. With Lawler blinded by the jab, Hendricks smashes a short overhand left into his temple.

4. Now Lawler is on the defensive. Hendricks sticks the jab out there again to guage the distance, and Lawler  makes his head a scarce target as he moves away.

5. While Lawler is worried about his hands, Hendricks drives home a perfect leg kick.

I've criticized Johny Hendricks plenty for his limited striking arsenal. Even after this, his most diverse and calculated performance to date, I still have no problem saying that Hendricks does not possess a powerful right hand because he only generates power by throwing his weight forward. What I overlooked, however, was the fact that Hendricks doesn't need a hard right hook to be dangerous. Sure, it might help, but Hendricks showed virtually no improvement in that direction against Lawler and still came out looking like a better striker than ever.

Rather than throw power with his right hand, Hendricks began using it as a blinder. Hendricks used an upward flip-jab to keep Lawler guessing, but his right hand was really at its best when he would paw with it, obstructing Lawler's vision just long enough to lull him into the power shot. There's a nasty thing that happens when the opponent continually sticks their jab in your face. After a few quick ones, you start to become preoccupied with it, even when it's not hurting you. Then, the glove stays in your face for a moment longer, draws your eyes, and you're still stuck watching it retract as the power hand comes crashing into your mug.

Hendricks right hand, I now realize, doesn't need to hurt opponents. He doesn't even need to throw hard jabs to get the opponent worrying about the jab as a weapon. All he needs is to line his man up, measure the distance, and keep him immobilized while he uncorks his trusty left.

And then, just when Hendricks had started to find success with the left hand, Lawler began to move his head, blocking, parrying, trapping, and moving away. As he did this, Hendricks made the right choice. Rather than getting drawn into a counter by chasing Lawler's elusive head with his hands, he waited for his opponent to settle his weight down, and threw a powerful left low kick. Lawler was so worried about Johny's cross that he never saw the kick coming, and he was so dedicated to moving his upper body and protecting his head that he simply could not check or avoid the kick that landed perfectly on the thigh right above his knee.

Check BE again tomorrow for Part Two of this breakdown, covering the action-packed rounds 3-5 with plenty more GIFs and diagrams. And don't miss my Technique Recap of UFC 171, replete with the many other brilliant bits of technique and strategy from this fantastic night of fights.