Most fans and media agreed that Johny Hendricks deserved the nod in the main event of UFC 171, but one judge arrived at his 48-47 score in a very odd way.

MMA judge Douglas Crosby doesn't usually earn the ire of the MMA world that often when it comes to his fight scoring. Every judge has a few fight scores that don't jive with the way most people score a fight, but as long as the right person wins, most are willing to give it a pass. Tonight, Johny Hendricks deserved to get the decision over Robbie Lawler, and he did with three 48-47 scores. So far so good, right? Well, here's a look at the scorecard: 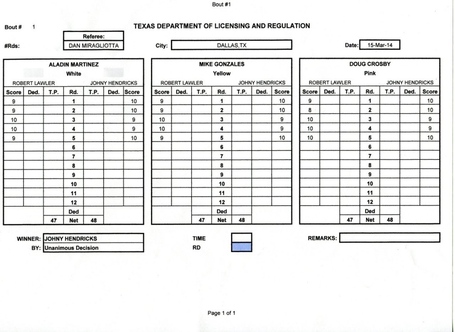 On the far right, you can see that Crosby offered up some very odd scores. He scored the second round as a 10-8 for Hendricks, which makes little sense. Even if you're using a very liberal definition of a 10-8, it's tough to justify that when the third round wasn't scored the same for Lawler. Lawler had Hendricks in way more trouble in the third than Hendricks had Lawler in over the second stanza. UFC president Dana White said as much when he was informed about the scoring at the UFC 171 post-fight press conference.

On top of that, Crosby scored the final round a 10-10. I have no idea how he came to that conclusion, since it seemed pretty clear as day that Hendricks won the round.

So even when the judges get it right in MMA, they still get it wrong. Just another night in the UFC.