Johny Hendricks occupies a weird place in the UFC's welterweight division. Regarded by many as the true champion after his razor thin split decision loss to Georges St-Pierre in November, Hendricks was an easy choice for title challenger when GSP vacated the belt. Unfortunately for Hendricks, he is now set to face a dangerous, if unlikely, opponent who may in fact be a much worse stylistic matchup for him than St-Pierre ever was.

In Robbie Lawler, Hendricks faces an opponent with equal if not greater punching power, with strong jiu jitsu and counter wrestling, and a truly terrifying killer instinct. Unlike GSP, Lawler possesses the right tools to punish an overzealous opponent (uppercuts, check hooks, and a solid chin), and the willingness to stand in the face of danger and use them. Hendricks will need to be better and smarter than ever before to stand a solid chance of beating Lawler. Fortunately for him, he's already proven he's capable of improving and adapting, both between bouts and between rounds.

Today we're taking a look at Hendricks' most recent adaptations, and the ones that will serve him best against the Ruthless one.

Before we get into the analysis, here's my preview of the Hendricks-Lawler bout at UFC 171 with Kid Nate & Dallas Winston:

Robbie Lawler has a known weakness to leg kicks. Johny Hendricks has a known weakness for his own left hand--he's probably thrown more left hands than any other two strikes combined. In addition, Hendricks isn't much of a kicker. When he does throw them, they're little more than token strikes, thrown for the sake of "variety." He did, however, unveil one new weapon in the St-Pierre fight that could be incredibly effective against Lawler. 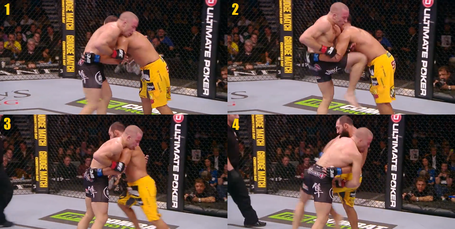 1. St-Pierre steps forward with his right leg, pulling his hips back for a knee.

2. The champion's knee is thrown high, to Hendricks' midsection.

3. The moment that St-Pierre has thrown his strike, even before he sets his right foot down, Hendricks powers forward, stepping with his right leg...

4. ...and driving a straight, hard knee into St-Pierre's left thigh, while that leg is still bearing his weight.

This cunningly simple (simply cunning?) addition to Hendricks' game, and it suits him. St-Pierre's knee to the body, while well advised, could not generate much power. This was partially due to St-Pierre's grip (an underhook does little to control the posture of an opponent the way a collar tie does), and partially due to Hendricks' strength (he's not an easy man to yank around in the clinch), but the fact remains that the higher a leg strike has to travel, the less power it carries. Knees in particular are driven from the hip, and once the knee itself is brought above the level of the hip, the power of the attack rapidly degrades.

Hendricks' knee was the antithesis. Thrown straight from the hip, his strike carried the full weight of his body plus all the momentum generated by his powerful legs. Hendricks had the same grip as St-Pierre, but didn't need to control his opponent's posture, since GSP's leg was already wide open and perpendicular to the path of his strike. Finally, St-Pierre was unable to capitalize on Hendricks' compromised base as he threw the knee, because every attack disrupted his own base. It's damn near impossible to hit a knee tap with just one leg on the ground, and Hendricks' knees were driving St-Pierre's entire leg into the air almost every time they landed (watch the GIF).

Lawler has never fallen to leg strikes, but he rarely condescends to check them either. Trapped in the clinch, with Hendricks' titanium underhook keeping him in place, he would have little choice but to eat those knees to the thigh the same way that St-Pierre did, and nothing breaks down punching power like shots to the legs and body.

Johny Hendricks is a pot-shotter. In the past, his combinations consisted of little more than repeat left hands, thrown one after the other with little thought for footwork or balance. Even against GSP, he relied mostly on his speed and power to land single shots, but he showed a lot of improvement in his boxing ability. This will be crucial if he intends to stand with Lawler (and he will almost certainly have to at some points in the fight), as Lawler is a combination puncher through and through, and will happily counter single shots with a devastating five punch combo of his own. 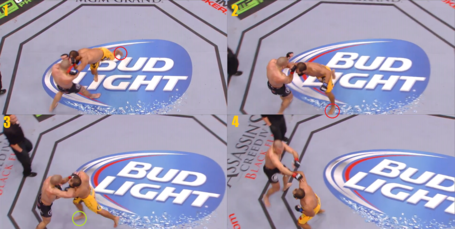 1. Hendricks throws a wild left hand as GSP resets from a kick. The champion catches the punch on his guard.

2. Hendricks' left foot (circled in red) drags forward, and he uses his right hand to keep GSP from circling too far to his right.

3. Hendricks now shifts back into his southpaw stance, bringing his bodyweight from his left to his right foot (circled in green) with the step as he lands a left uppercut to the chin of St-Pierre.

4. The champ finally manages to side step, and his knees buckle as Hendricks' weight carries him toward the fence.

This isn't pretty boxing, but it's a far cry better than the combination punching Hendricks displayed against Carlos Condit and in every other fight prior. The shift punch is a very old technique, found in both turn-of-the-century boxing and several forms of Karate (Lyoto Machida employs a... more delicate version of this same technique). Typically, it is used to take an angle while adding power to a lead-handed punch, but Hendricks uses it to recover from an overcommitted attack.

Robbie Lawler just might be the most unlikely title challenger ever, and yet he's got the necessary skills to become the UFC's new welterweight champ. BE's striking specialist Connor Ruebusch breaks down his wily veteran ways.

Johny Hendricks aims to follow in the footsteps of legendary dark horse Matt Serra by becoming the second man to knock out Georges St-Pierre. BE's striking specialist Connor Ruebusch takes a look at his chances.

By marching his weight from one leg to the other, Hendricks was able to keep himself well inside the range of St-Pierre's jab, and thus out of the champion's comfort zone. After the first left failed, Hendricks recovered by his balance without stopping his forward momentum, all with a little step of the right foot. As a result, Johny was still able to put power behind his uppercut, and staggered St-Pierre badly.

The downside, of course, is that Hendricks has clearly adopted this technique to make up for the fact that he throws himself off balance to generate power, rather than fixing his balance issues. Against St-Pierre, this was not often an issue. GSP is not known for his short range punches, and his respect for Hendricks' punching power was such that he quickly abandoned his counter takedowns for fear of dropping right into another uppercut. Still, St-Pierre had no small amount of success capitalizing on Hendricks' tendency to compromise his own balance and defense for the sake of power. 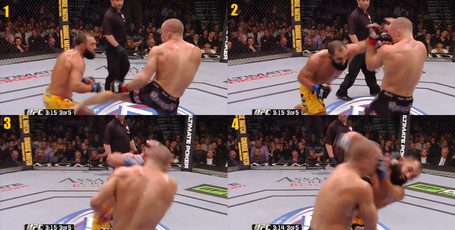 3. Still hurtling forward, Hendricks throws a wide right hook that clubs the side of St-Pierre's head.

4. St-Pierre, however, easily absorbs the powerless punch as he pivots to his left, countering Hendricks with a hook of his own and sending the Oklahoman wrestler caroming into the fence.

Johny Hendricks' biggest issue is that he only attacks moving forward, and only in straight lines. Repeatedly, throughout the GSP fight, Hendricks would lunge forward, leaving his feet behind him, only for St-Pierre to side step or pivot to the left and out of danger. On the rare occasions that Hendricks did catch GSP circling (such as with the shift punch above), it was a result of his tenacity and strength more than his technique.

In the example above, you can see that Hendricks moves straight at St-Pierre. As the champion backs up, he fails to check his momentum and stay in punching range. Instead, he willingly gives up a dominant angle reaching for a right hook that, frankly, has little significance. Hendricks left hook will always be substantially weaker than his left until he learns to keep his feet under his upper body and pull his weight back, instead of just throwing himself forward.

So far in his career, Hendricks has succeeded based mostly on two things: his belief in his power, and his opponents' fear of it. I have no doubt that his confidence in himself will be at an all-time high come Saturday, but Hendricks will be hard pressed to find a fighter less gun-shy than Robbie Lawler. Lawler thrives in the heat of battle, smack in the midst of Hendricks' preferred range. Hendricks can certainly put him away, but hopefully he learned a few lessons from his fight with St-Pierre and comes in even more improved, with better footwork, more patience, and a tightened up boxing game. He's going to need it.