It's part 2 of this weeks Technique Recap, wherein I break down the finest (or at least most memorable) examples of technique and strategy from the latest UFC event. This week saw UFC 169, a card full of decisions that nonetheless had its fair share of solid fights. Unfortunately, we don't have time or space to cover all of them, so I've limited myself to just two.

I ought to preface this section by saying that I was very impressed by Kevin Lee, and in no way do I want to imply that he is a bad mixed martial artist. He is, however, not a professional boxer, and so it was very confusing to see him attempt to adopt a number of boxing techniques usually associated with men like Floyd Mayweather.

Before I get into the nitty-gritty of Lee's strange stylistic approach, let me clarify something. This... 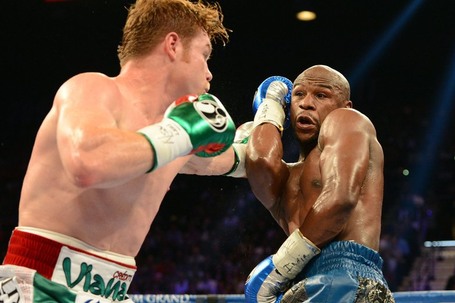 ...is not a "Philly Shell." Lee, like Floyd Mayweather, hails from the Detroit Area of Michigan, not Philadelphia, so calling his imitation of Floyd's style "the Philly Shell" makes no sense. In truth, the term seems to have first appeared in the Fight Night Series of games by EA, and a look at Google Trends shows that the phrase was never mentioned online prior to December of 2007. What Floyd does is called "the Crab" by the man who designed it, Floyd Mayweather Sr., and so that is the name the style should bear.

In addition, Floyd Sr. is just about the only man to consistently train successful fighters in this style--it's his style, after all. Kevin Lee, to my knowledge, does not train under Floyd Sr, and it's clear from watching him on the feet that he doesn't have a grasp of the nuances of the style. Instead, he was merely imitating other fighters. For example, this is how Kevin Lee attempted to protect his chin: 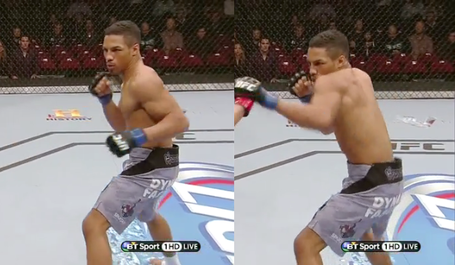 By shrugging his left shoulder. What this demonstrates is a very shallow understanding of the science behind the Crab. As you can see in the image above, Floyd protects his chin by leaning back and tilting his entire torso to the right, bending at the hip and slanting his shoulders, bringing the left one up to cover his chin from the side. Shrugging the shoulder joint as Lee was doing is not only an invitation for a rotator cuff injury, but it compromises posture, lessening one's ability to take a shot, as evidenced by the fact that Iaquinta was able to drop Lee with a jab in the first round.

This is not meant to discredit Kevin Lee who, as I said above, is an impressive and talented mixed martial artist. My point is that Lee's decision to experiment with aesthetically-pleasing techniques may have cost him his UFC debut. Who knows, maybe Lee's coach likes him to fight this way, and he was only doing as he was told, but his coach is not Floyd Mayweather Sr. and Lee was clearly not equipped to use this style effectively.

Honorable mention goes to Ricardo Lamas. Were you impressed by his spinning kicks? Yeah, neither was Jose Aldo. 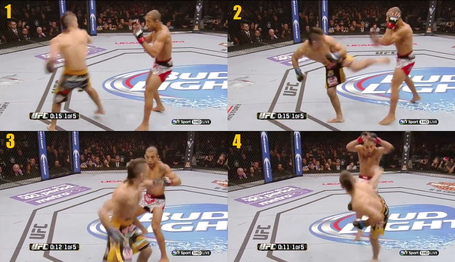 1. Lamas takes a huge preparatory step, and Aldo begins to back out of range before he even plants his foot.

2. Lamas' kick misses its target, which was evidently the champion's cup.

3. Another spin, seconds later, just as telegraphed as the last. Once again, look at Aldo. He knows exactly what's coming already.

4. Aldo pulls out of range as Lamas' kick, which was once again poorly aimed, misses by a mile.

Look, I typically spend a lot of time rewinding, playing, and pausing over and over until I can get my media player to freeze on the right frame of whatever fight I'm breaking down; it's not easy to time the lightning fast strikes of some of these martial artists. Capturing these spins, however, was depressingly easy. Lamas simply does not throw good spinning kicks.

The fact of the matter is that spins have been in vogue in MMA ever since Edson Barboza's spectacular knockout of Terry Etim. But Barboza is an excellent spin-kicker. His timing and application is among the best in MMA, and simply having the basic idea of how to throw a kick does not give you license to use one in a fight. I understand the appeal of throwing a technique that the opponent just might not expect, but once you get to the point of throwing three or four spinning kicks in a round, with not one of them landing, it's time to move on.

MMA is not a video game, and succeeding at it is not a matter of simply learning more moves. Many fighters would benefit from learning the approach that works for them, and relying less on monkey-see-monkey-do imitation in the development of their gameplans.

The curious thing about Lamas' case is that Ricardo is normally a very straightforward fighter, which implies that his sudden fondness for unorthodox techniques was a result of desperation. Why might he be feeling desperate, you ask? Well...

Okay, let me start by apologizing for the title for this section. I was wracking my brain for clever titles relating to Jose Aldo's kicking mastery, and that's literally the best I could come up with: a vague reference to his soccer-playing past, made even more tenuous by the fact that I'm almost certain he wasn't a keeper. So yes, I'm ashamed of that, and I'm sorry.

The overhand right is a common punch in MMA, but its rarely thrown well. BE's striking specialist Connor Ruebusch breaks down some of the technically superb exceptions to that rule from UFC 169, including Neil Magny, Al Iaquinta, and Renan Barao.

You know what I'm not ashamed of? Being a fan of Jose Aldo's fighting style. And I will not apologize. In fact, you should apologize, all you fans who decried one of the greatest technicians the sport has ever seen for being "boring." We all love some ultraviolence in our MMA--we enjoyed every bloody, glorious second of Varner vs. Trujillo--but when you have a fighter who is so skilled, so profoundly advanced a practitioner of his craft that he outclasses the best fighters in the world time after time, all while displaying superb defense and offensive abilities... well, that's the kind of thing you should really appreciate.

I know it may not always satiate our basest desires, but a Jose Aldo fight represents the zenith of MMA proficiency. All of that raw excitement you're used to experiencing in other fights? That's the result of both fighters making mistakes: there is no "war" to be had when one fighter completely dominates the other. And Jose Aldo almost never makes mistakes. So suck it up, and learn to enjoy it, fight fans. Jose Aldo is an indestructible engine of calculated violence, and as long as you don't expect a brawl, you'll realize how sublime a fighter he is.

Alright. Now I'll step down from my soapbox, and break down what makes Jose Aldo such a great low kicker. Yes, he kicks very hard, and he places his kicks very well, but if Anderson Silva taught us anything last year, it was that kicks are really better thrown behind a set-up. And set-ups are exactly what make Aldo's kicks so fearsome.

Ever wondered why every opponent gets their thighs battered to mincemeat when they know during camp that Aldo's going to attack their legs? This is why.

1. Aldo fakes a kick with a stutter step forward. I love images like this because if you zoom in, you can almost see the cartoony dotted line going from Ricardo Lamas' eyes to Aldo's right leg-he's so worried about the kicks that he doesn't see what's really coming.

2. As Lamas lifts his leg to check the perceived kick, Aldo cracks him with a left hook.

3. The sideways force of Aldo's punch forces Lamas to set his checking leg down. Aldo throws one more hook, just to keep Lamas on the defensive as he sets his feet...

4. ...and steps into a perfect low kick, placing his shin right across the back of Lamas' thigh.

5. But it's not over. Lamas lifts his leg, trying to execute a Thai shield block to dissuade Aldo from kicking him again. Aldo smashes another thudding hook into the side of Lamas' guard...

6. ...the force from which forces Lamas, once again, to set his leg down. This time Aldo's kick lands while all of Lamas' weight is on that leg.

Jose Aldo is a finesse fighter, through-and-through, but that doesn't mean he's dainty. In fact, Aldo almost never throws an uncommitted strike. He is that rare breed of fighter--a technician with ferocious power-and he uses the threat of that power as his set-up. Because Lamas has already eaten numerous low kicks at this point, all it takes is a shuffle of the feet to convince him that another kick is on the way. Then the violence begins.

Just as Aldo used Lamas' check against him, forcing him to immobilize himself in the path of a left hook, he will often make his opponents move in order to punish them with kicks. 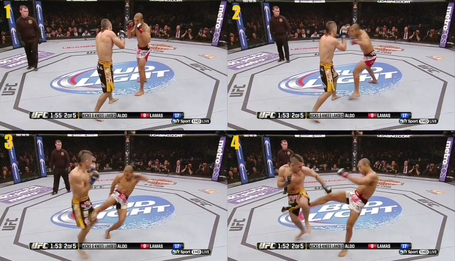 1. Aldo and Lamas square off.

2. Aldo feints a jab, stepping forward and dropping his weight.

3. Lamas reacts by covering up and backing away, right into the sweet spot of Aldo's kick.

4. Lamas fails to get out of range or recover positioning in time, and Aldo kicks him again, just because he can.

So as you can see, fighting Jose Aldo is quite the quandary. On the one hand, you know he wants to kick you, so you train your checking like nobody's business. On the other hand, he uses your fear of his kicks against you, as a means to land punches. And then, on some strange, sinister third hand, he punishes you for being so foolish as to react to his punches at all, by kicking you as you attempt to back away from them. It's easy to see how even impressive fighters like Ricardo Lamas and Chad Mendes are made to look like amateurs once in the Octagon with this man.

And let's make one thing clear: Aldo is beating the best fighters that 145 has to offer, with nothing more than a jab, a cross, some body shots, and his trusty right leg kick. With the same tools that every striker learns in their first two months of training, Jose Aldo is completely outclassing the best in the world.

I don't know about you, but that impresses the hell outta me.

For more fight analysis and fighter/trainer interviews, check out Heavy Hands, the only podcast that focuses exclusively on the finer points of face-punching. Be sure to listen to the UFC 169 breakdown with BE's own Zane Simon, and feel free to rate and review the show on both iTunes and Stitcher.