The overhand right is a common punch in MMA, but its rarely thrown well. BE's striking specialist Connor Ruebusch breaks down some of the technically superb exceptions to that rule from UFC 169, including Neil Magny, Al Iaquinta, and Renan Barao.

Ah, the Overhand Right--it seems fitting to capitalize the name, as it is a strike of somewhat mythical proportions in MMA. Looping punches are nothing new, but the prevalence of the overhand right in MMA is pretty astounding. Whereas fifteen years ago the average American might simply shrug and shake their head upon hearing the term, now any random teenager would be happy to tell you that, indeed, there is no more powerful punch in existence.

Perhaps this is because of the famous wild right hand of Chuck Liddell, one of the sport's first real American stars, or perhaps the prevalence of the term and the punch it refers to is simply a result of the fact that most MMA fighters just don't throw very good straight punches. Whatever the reason, the Overhand Right has seated itself, as a phrase, firmly into our vernacular and, as a strike, into the arsenal of just about every mixed martial artist on earth, from the lowliest strip-joint brawler to the most dominant champion.

Fortunately, the infamous punch does seem to be undergoing something of a transformation. Though it often seems to exist as an MMA-exclusive technique (and indeed, most boxing commentators seem to prefer the term "looping right"), the overhand is actually quite common in boxing. What's more, it doesn't have to be a desperate, easily-countered Hail Mary punch. In fact, there are plenty of very practical uses for a technical, tightly thrown overhand punch, and we were lucky enough to see more than a few of them last weekend.

So let's break down the mechanics of this punch, and take a look at a few of its uses.

I owe Neil Magny an apology. Before this fight, I dubbed him a fighter who "excels at nothing." I may have even been right at the time, but it's clear now that the potential was there, and Magny proved that he is being cultivated into a very dangerous striker. His opponent, Gasan Umalatov, was a crafty boxer who, despite his unorthodox technique and nowhere-to-be-seen jab, posed a legitimate threat in the realm of counter punching. I fully expected Magny, who in the past was marked by his hesitancy and inactivity on the feet as well as a weakness to submission grapplers, to walk into Umalatov's fists and, ultimately, lose a decision that would likely have gotten him booted from the UFC.

If you saw this fight, you'll already understand the reason for my apology. Magny was on fire. According to Fight Metric, Magny landed 174 strikes on his opponent. Even taking into account the unreliability of fight stats, that's a whole lot of punches. And many of those were long-range overhands, thrown in conjunction with Magny's killer up-jab. Take a look. 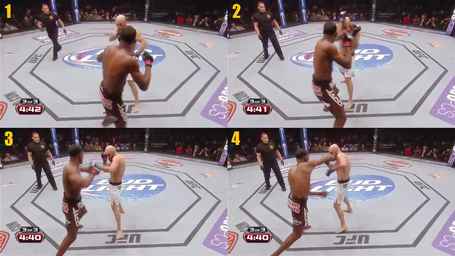 1. Magny shifts from side to side in front of Umalatov, slapping the Russians guard down occasionally with his left hand.

2. An up-jab slinks through Umalatov's guard from beneath, causing him to adjust his defenses.

3. Now Magny circles to his left, opening up an angle on Umalatov. He simultaneously throws a probing left hook, which Umalatov parries aside with his left hand.

4. Magny's overhand sneaks right through the opening in the crafty Russian's defenses, over his left shoulder and into his chin.

Urijah Faber, so long the second-best, makes what might be his final run at the bantamweight title this Saturday. BE's striking specialist Connor Ruebusch takes a look at his chances by breaking down the improvements Faber has made under Duane Ludwig

Here, you can see the overhand being used in conjunction with a number of other strikes, all of which come from different angles. Upward strikes alone give many opponents trouble-the slight upward angle of Magny's up-jab, for example, often prevented Umalatov from seeing it coming, and made it difficult to block with any number of typical boxing guards-so it only stands to reason that the addition of a downward strike would make things even more difficult. Magny threatened Umalatov from just about every angle imaginable, all while staying out of the shorter man's effective range. For more on this concept, check out my breakdown of Cole Miller, who recently beat the beard off of Sam Sicilia using similar tactics.

Magny gave Umalatov hell because he refused to overcommit-even sometimes to his own detriment-and constantly moved from side to side, forward and back. Keeping the Russian on the end of his long, varied punches, he clearly won the day, and definitely won me over.

GETTING PAST THE SHOULDER

Al Iaquinta nearly let another fight slip through his grasp, despite appearing to have every advantage over his talented-but-unseasoned opponent. Tough second round aside, however, Iaquinta showed very intelligent boxing, highlighted by his tactical use of the overhand right.

1. At the start of the third round, Iaquinta rushes out of the gate behind his jab, pushing his opponent Kevin Lee back.

2. Lee thinks to catch Iaquinta with an uppercut, but lifts himself up from the ground, thrusting his chin into Al's overhand.

3. Stunned, Lee retreats to the fence, where he attempts to pick off jabs with his rear hand and lifts his lead shoulder and elbow to dissuade the right. Iaquinta jabs his way forward again.

4. Al knows that, if Lee hopes to escape his range, he has only one direction he can go with his back to the fence, so he pressures Lee until he steps to his left, right into Al's overhand right.

5. One last time, Al has Lee against the fence. Lee tries again to deflect the right hand with his left shoulder...

6. ...but the tight arc of Iaquinta's punch carries it over this obstacle and right into Lee's temple.

Iaquinta probably had the most technically perfect overhand right of the evening. Starting with his elbow tight to his ribs, he would throw a punch almost mechanically indistinguishable from a standard straight right, until, at the last moment, his elbow would lift, granting the strike a slight downward arc that bypassed Lee's defenses again and again. Though Lee's attempt to box Detroit-style with his opponent was ill-advised (more on that in part 2 of this recap tomorrow), Iaquinta knew exactly what to do to get around his shoulder and elbow.

Lee's overhand is very reminiscent of the legendary short right hand of Joe Louis, one of the greatest heavyweight boxers in the history of combat sports. Watch the GIF below for an example of this technique being performed in the same application as Iaquinta's, but with perfect technique and thunderous power.

Barao used a variation of right hands in his too-short but very impressive rematch with Urijah Faber. After hurting Faber early with a straight right (GIF), Barao stalked his opponent, waiting for another opportunity. And when the Baron found that opportunity, he took advantage with a bloodlust unrivaled in the bantamweight division. 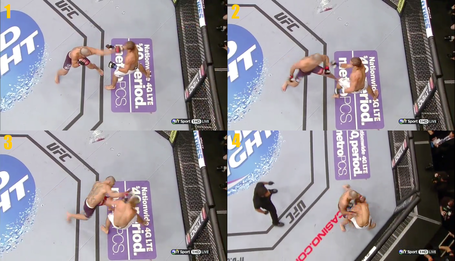 1. Barao pops Faber's head back with a snapping, elbow-hyperextending jab.

2. After pulling back, Barao steps forward once again, dropping his weight and feinting another jab.

3. In reality, he is loading up on a big right hand. Perhaps unexpectedly, Faber does not retreat out of range, instead vying to plant his own feet and counter. Barao shortens up the punch into a tightly-arcing overhand that smashes into Faber's temple.

4. And Barao jumps on his prey, hunting for the finish.

Barao's overhand right, unlike Iaquinta's, is pretty poor technically speaking. He lands with his digits rather than his knuckles, and he throws his hand in a long arc from the hip, rather than the last-second elbow turn that made Iaquinta's punches so hard to read. But in terms of application, Barao's overhand is perfect. Because Faber refused to give ground as Barao stepped in, the two fighters ended up very close to one another. Between frames 1 and 3 above, you can see the rapidly shrinking gap between their heads. As a result, a straight right, like the one Barao used to initially hurt Faber, might have been stifled, or blocked partially by Faber's attempted counter left hook. The overhand is a perfect compromise-its tight arc makes it a shorter range punch, and allows it to bypass any obstacles presented by the opponent's arms.

So there you have it. Overhand rights are very common in MMA, but good ones are far too hard to come by. As MMA striking continues to improve, we will see fewer and fewer wild haymakers, and more tactically chosen punches like the ones above. Be sure to check back tomorrow for part 2 of this recap, wherein I'll cover a wider array of techniques from UFC 169.

For more fight analysis and fighter/trainer interviews, check out Heavy Hands, the only podcast that focuses exclusively on the finer points of face-punching. Tonight's episode features a technical breakdown of UFC 169 with BE's own Zane Simon. Now available on both iTunes and Stitcher.