The official police report details some very disturbing incidents in the history of Thiago Silva and his wife that led to his police standoff and arrest.

The official police report is out detailing the incidents that led to Thiago Silva's standoff with the police and eventual arrest. In the report, obtained by MMA Mania, it is clear that this was not an isolated incident. A January 30 incident in which Silva forced a gun into his wife's mouth and threatened to kill her, as well as a February 5 incident where Thiago sent texts threatening to kill his wife--while violating an order of protection--are detailed in the report.

Here's the transcript from the report:

The above listed defendant, Thiago Silva and the victim Thaysa Silva have been married for thirteen years and have no children in common. Silva trains as a mixed martial arts fighter for the UFC and his wife also has martial arts experience. In December 2012, the defendant and the victim separated due to marital problems. During this time, the defendant was still living in their listed residence of 2041 Coral Heights Blvd, in the sity of Oakland Park, Broward County, Florida. On January 30, 2014 the victim called 911 due to the fact she and the defendant had a domestic altercation. Deputy Harold Storey 6290 responded and upon meeting the victim, she was visibly shaking and sobbing uncontrollably. She advised that the defendant and she were arguing over accusations of an extramarital affair. During the argument, the defendant picked up a silver colored revolver, pushed her on the sofa, pointed the firearm at her and told her he was going to kill her. When she began to scream, he covered her mouth with his free hand. He then placed the firearm in her mouth while still holding her down. While still attempting to scream, the defendant then left the residence and fled in his vehicle. She stated to Deputy Story that she was in fear for her life and believed that he had the means and the intention to kill her. The same day, the victim obtained a temporary injunction for protection - domestic violence (DVCE14-0745).

On February 5, 2014, the victim called 911 in reference to another incident with the defendant. Deputy Dillon Boyce 16919 responded to the residence and met with the victim. She stated that at 853pm, she arrived home and found the defendant in the residence. She confronted the defendant and told him to leave the residence because she had the injunction for protection against him. He then stated that he would not leave and that she needs to leave. A short time later, the defendant left the residence. She advised when he left he was upset but did not harm her. Moments later, the defendant sent a text message to the victim in the language of Portugese stating "I am gonna fuck you up and you are going to die. I am going to hire someone to kill you and I am gonna move my girlfriend in." Detective Roger Frey 14803 arrived on scene and took a sword statement from the victim in reference to the aforementioned facts.

On February 6, 2014, at approximately 744pm, the victim was training at the Popovitch Brazilian Jiu-Jitsu Center located at 777 E Oakland Park Blvd. She and victim#2 Pablo Popovitch were inside the center when she observed the defendant driving his vehicle, a 2012 Dodge Charger bearing FL Tag G7ARY. She could see the defendant pull up to the center because the entire store front is clear glas. The defendant then started hoking the vehicle horn continuously. She then went outside to speak with him to avoid a confrontation since the victim Silva and victim Popovitch are in a romantic relationship. The defendant is aware of this relationship and this fact has contributed to his actions. She approached the defendant who was driving, and when she approached the driver side he rolled down the window. She immediately noticed that he had been drinking and extremely intoxicated. He then produced a black glock firearm and pointed it at the victim. He stated "you have ten seconds to bring Pablo outside and if he does not come out, I will go in the gym and start shooting everyone." **It should be known that there was a class insession with approximately 25 adult students inside. Victim Popovitch then exited the center to protect victim Silva from harm. He then approached the driver's side of the vehicle and observed the defendant pointing the firearm above the door frame and at the victim Silva. The defendant threatened to kill both victim Silva and victim Popovitch. Popovitch then ran back into the gym, locked the front door, and called 911. The defendant then drove away. Deputy J. Cabal 16875 arrived on scene and met with both victims.

Images which can be clicked to enlarge: 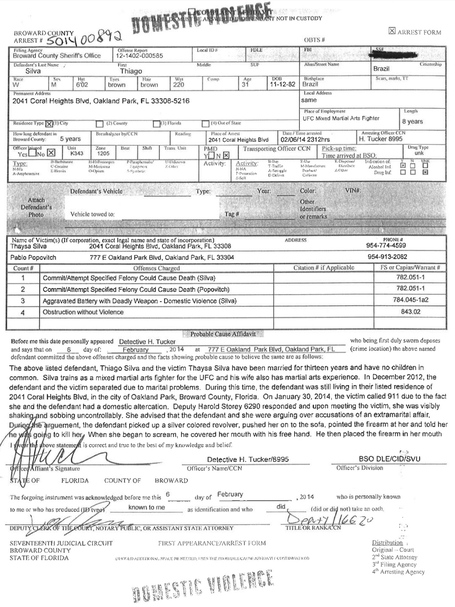 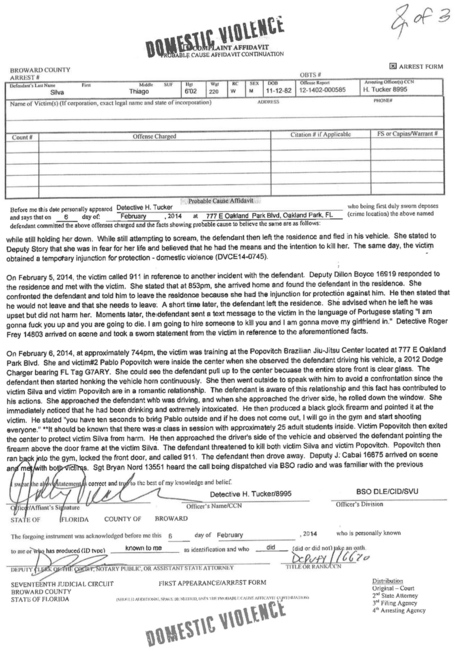 Thiago Silva in custody after armed standoff with police