Okay, okay, so it's a little late to be doing a Tech Recap of UFC on FOX 10, but I just can't pass this one up. Despite ending with what I will politely term a "lukewarm" main event, the UFC's 10th FOX card definitely had its highlights. From a technique standpoint, this one was all about the head kicks, and that's the theme of our Tech Recap today.

If fighting is the game of distance (and it is), then the jab is the equivalent of a shiv to the ribs, and a head kick is the equivalent of a rocket launcher fired from a half mile away, and the rocket is equipped with some bright flashing lights and a siren to warn of its approach. There is no greater distance in stand-up fighting than the distance between your foot and your opponent's head, and overcoming that distance requires an excellent set-up, or a blind opponent.

There were more than a few set-ups on display for UFC on FOX 10. Let's take a look.

Krylov came out in this fight as if determined to prove his many detractors wrong. After a wholly unimpressive performance in his UFC debut, Krylov changed a few minds with a 1st round head kick KO. Certainly the mind of his opponent Walt Harris was altered for a moment.

Krylov comes from a Kyokushin Karate background, and it shows in his kicking. Many Kyokushin practitioners excel at combining the tight chamber of a more "typical" traditional martial arts kick with the hip thrust and turn more commonly associated with Muay Thai. Though it is unclear whether or not the chamber of a kick gives it any more potential for damage, but it certainly serves to disguise the trajectory of the kick. 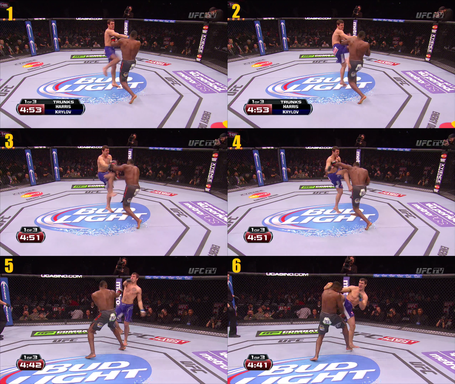 2. Then pivots on his left foot (circled) to open his hips and lands a kick across Harris' ribs.

4. This time it's a front kick to the nards that misses and lands on Harris' hip instead.

6. And a big ol' pivot lets his leg swing up and around Harris' guard.

BE's striking specialist Connor Ruebusch picks fights against his girlfriend, pitting his analytical skills against her taste in men. It's sexiness vs. deadliness, in the ultimate test to determine the best fight-predicting criterion.

Interested in the different striking styles found in MMA? Then join us for our series "Striking Styles". Here, part 1 of our 3 part series breaking down the different styles of Muay Thai, as we examine the true Thai style of this striking art.

Both Krylov and Harris came at one another aggressively out of the gate. Immediately, the fight became a question of which man would land a big shot first, and that hinged on which man would be able to throw the other off. Harris made it clear that he was content to eat kicks in order to counter with punches, and Krylov was happy to stay out of range and oblige him.

Krylov's control of distance wasn't great. In fact, he looked quite awkward on the feet even in this very brief fight. But his style of kicking served him well, keeping Harris guessing until the very sudden end. Ironically, the very first kick that Harris attempted to block was the one that put him away. It's always best to use both arms to absorb the blow of a head kick, and Harris only had his left hand up, but a normal head kick would have still been unlikely to knock him out. This one, however, landed behind the ear perfectly, and that is a function of Krylov's footwork.

Instead of stepping to the outside of Harris' lead right foot, Krylov placed himself at an inside angle with his initial step, before pivoting and whipping the kick around into his opponent's skull. This same footwork was used by Anthony Pettis in his classic knockout win over Joe Lauzon (GIF)--in fact both kicks resemble one another a lot, with an inside step followed by a forward chamber and an explosive pivot to swing the kick over and into the target.

And speaking of men named Pettis...

AN ENDLESS SEA OF HEAD KICKS

Pettis the Younger made a very good account for himself in this tough fight with Alex Caceres. In fact, were Caceres not such a crafty submission grappler, Pettis would have almost certainly walked away with a decisive win over a high quality UFC opponent. Despite losing his head (and supply of blood to said head) in the third round, Sergio displayed some excellent counter striking and technical kickboxing throughout the bout, including some seamless transitions from boxing into cranium-kicking.

Throughout the first round of their bout, Pettis landed his right hand on the longer, taller Caceres almost at will. Working behind a jab and a long left hook, he would step to the outside of Caceres' lead right foot and plunge a right hand between Caceres' gloves with his head off-center. Since that was his most effective strike, and the myriad head kicks he had thrown throughout the round were all easily blocked or avoided, Pettis drew the logical conclusion, and used one to set up the other. 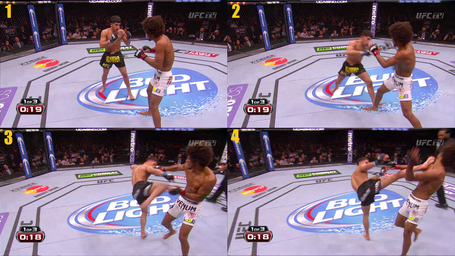 1. Caceres circles, moving away from the smaller Pettis.

2. Pettis takes a deep step to the outside of Caceres' right foot, bringing his head far over his own left leg and extending his right arm-in short, he really sells the cross, and Caceres reacts to it, trying to parry with his left hand.

3. Now Pettis pulls his head back and chambers his leg (a signature of Duke Roufus' fighters' kicks) for the kick. Caceres realizes what's coming now, and pulls back his head while moving away with his feet.

4. Thanks to the deep penetration of his initial step, Pettis still manages to catch Caceres with his foot, knocking his head back.

Sergio threw countless head kicks in this bout, but this one was the best set up. Often the telegraph for a kick can be utilized as a feint-if the opponent is going to see the strike coming, why not convince him that it's something else? Pettis' kick was hesitated in the extreme, seeming to take ages in its long arc from the ground to Caceres' chin, but Caceres still couldn't react to it properly, because he had already thrown himself out of position reacting to the strike he thought he saw coming.

Since Krylov got Anthony Pettis, we'll give Sergio Josh Thomson, who used this exact same set-up to hand Nate Diaz his first ever knockout loss. Notice how, in this GIF, Thomson perfectly times his kick so that Diaz, slipping the punch, ends up leaning directly into his shin.

Before this event, I predicted that Donald Cerrone would struggle with Adriano Martins who, for lack of name value, was being panned as a gimme fight for Cowboy. I feel vindicated in my assertion, as the powerful southpaw was able to give Cerrone a run for his money for the first three and a half minutes of the round. All of that ended, however, when Cerrone got into his rhythm.

Cowboy is known as something of a rhythm fighter-he starts slow, but if his opponent allows him to, he will start to warm up to his opposition and take over the initiative as the fight wears on. Despite landing some clean punches, Martins failed to stifle Cerrone's own offense, and the confidence with which Cerrone head kicked him is proof of Martins' mistake. 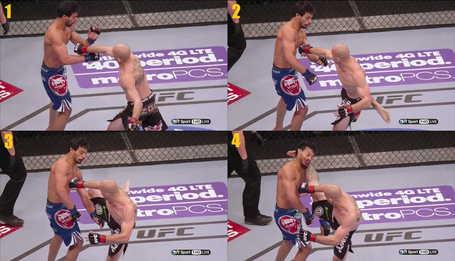 1. Cerrone's extended right hand makes Martins flinch: he swats at the perceived punch with his left hand and slips to his left, turning his head away and closing his eyes.

2. As Martins' eyes reopen, he realizes that Cerrone is kicking, not punching.

3. He reaches with his out-of-position left hand, trying to catch what he expects to be a body kick.

4. Instead, Cerrone's shin collides with Martins' jaw, momentarily transforming him into Sloth from The Goonies, and nearly taking his head off of his shoulders.

Once again, we have an opponent reacting to the telegraph of the kick. By swinging his arms confidently into the wind-up of the strike, Cerrone is able to convince Martins of an impending punch. Really, though, the key aspect of this sequence is Martins' own reactions. He is the textbook example of someone who, very strong in one skillset and highly gifted athletically, can excel at MMA at the lower levels, but struggles against advanced, thinking opponents. Cerrone threw not one head kick before this one, and Martins was clearly unprepared for one when he did throw it, despite Cowboy's proclivity for the technique. Worse, Martins took his eyes off his opponent, one of the biggest mistakes a fighter can make.

The result was that Martins tensed up momentarily, lost a split second of reaction time to that panic response, and then failed to adjust accordingly even after recognizing the incoming strike for what it was. The most memorable finishes are often like this: offensive brilliance and a huge defensive brain fart combine to produce spectacular results.

So what's the lesson for today? Apparently, the next time you see a southpaw vs. orthodox matchup with at least one solid kicker, grab the popcorn, because it's bound to be good. Be sure to stay tuned to BE-tomorrow and Friday I'll be releasing parts 1 and 2 of my Tech Recap for UFC 169.

For more fight analysis and fighter/trainer interviews, check out Heavy Hands, the only podcast that focuses exclusively on the finer points of face-punching. Our latest episode features an interview with boxing trainer Daði Ástþórsson. Now available on both iTunes and Stitcher.