Bubba McDaniel just got his W2s from his 2013 run with Zuffa.

Share All sharing options for: Bubba McDaniel made $33,200 fighting for the UFC in 2013

So, you wanna be a f**king fighter!? Because you're going to make about as much money waiting tables... is the basic message. Or at least that appears to be the case if you make your way off the Ultimate Fighter and into a UFC contract. Bubba McDaniel apparently just received his W2s from Zuffa for the past year and the bottom line was less than stellar. 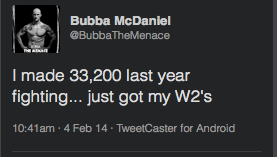 There's no telling if that's before taxes, or after, but considering his $8,000/$8,000 contract and the fact that he fought twice last year, that would probably line up pretty well with a gross income, rather than a net. It would also mean, considering that he went 1-1, that he probably got paid a pretty sizable locker-room bonus for his fight against Brad Tavares (or about $8,000 for appearing on the Ultimate Fighter). Still, no matter how you spin it, that's a pretty menial wage, especially considering the external costs that most fighters incur as they prepare to fight. What do you think? Does the bottom line make sense for a fighter who has yet to make a PPV appearance?

Update: I spoke to Bubba McDaniel shortly after writing this piece and he informed me that the message was actually intended to go to his accountant and got published to his twitter feed by mistake.