Share All sharing options for: WMMA February Preview: Mizuki Inoue Back in Action

Hello, women's mixed martial arts fans. Once again bringing you significant WMMA action this month, sifting through the confusing waters of WMMA to bring you only the most relevant fights. Here we go. The action is sparse this month. We need more Invicta!

One fight that already took place was over in Australia.

At the beautifully named Roshambo MMA saw a very rare 100lbs (which I've heard is being called pinweight, I'll still put my bid for centuryweight) match between Shauna Carew and 4 ft 10 Sarah Lagerstrom. Langerstrom and Carew were not very successful at atomweight and both were making their 100lbs debut. Lagerstrom's nickname is "The Midget" and Carew defeated her via split decision.

I've really only seen or heard of the Japanese employing a 100lbs weight class (it was ruled by 4 ft 11 Satoko Shinashi for the longest time), so it could be interesting to see if this is a new weight class coming up. The former #1 atomweight Naho Sugiyama did weigh in at only 103lbs for her 105lbs title fight against Jessica Penne.

Kelly is yet another champion level striker (Muay Thai, in this instance) to cross over to MMA. She was considered one of the top female Muay Thai fighter during her career, and showcased her Muay Thai slashing and hacking with elbows and knees en route to her first victory via knee to the dome from a clinch-ish position. Howarth you may remember from not being very impressive in defeat to Jessamyn Duke in the "get into the house" fight. Howarth, however, is only 26. I'm not

Also, on the card two debuting strawweights. England's Kirsty Davis and Finland's Veera Nykanen. I know nothing about them. But it's free and you might as well if you're waiting for the Amanda Kelly fight.

Without a doubt the toughest test for Tomimatsu. Inoue, as she showed to a wider audience against Bec Hyatt, is a special talent. Not even 20 years old, Inoue is a true mixed martial artist. Technically sound in every aspect, but what separates her from the rest of the pack is her striking. She is definitely up there as one of the most technically proficient strikers in MMA. Period. It sucks that I haven't been able to find any footage of Inoue's semi-final fight with Emi Fujino or Tomimatsu's two matches with Mika Nagano.

This is the final of the 4 woman strawweight grandprix, and hopefully after this will see Inoue against top 10 opponents more often. Tomimatsu is good. She's scrappy and will try and fight and do damage til she's done, but Inoue is on another level. 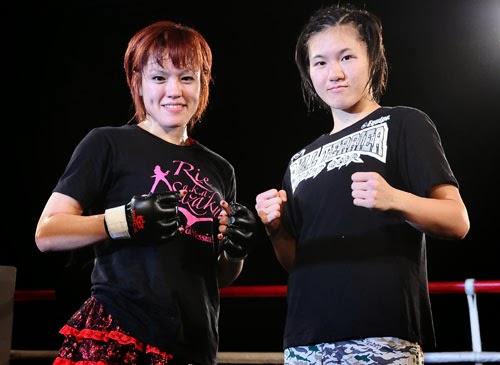 Hopefully Takano can take out Sugiyama. She looked to be an intriguing prospect, opening her career at 2-0, but has since dropped decisions too more experienced Japanese atomweights. And those Japanese atomweights have lost to Sugiyama before. If you read my posts on Sugiyama before you'll kno, I think she's an average fighter. An average grinder (Katja Kankaanpaa showed what an elite grinder looks like), who was completely overrated due to atomweight not really existing anywhere other than in Japan.

Let's just do a quick copy and paste of Nicolini's BJJ accolades:

Nicolini made her MMA debut in 2011, so she already had multiple BJJ titles, but a lot of the BJJ players (Jacare is a rare breed), even the champions (Roger Gracie), seem uncoordinated in other aspects of MMA. Also, their BJJ doesn't seem to apply the best towards MMA. Could be the gloves, the years of training in the gi or just the added pressure of punching and getting punched. Meaning, she'll beat the regional scene and some veterans, but when it gets to the top 10-15 girls in the world, she'll probably lose. I don't have a very high ceiling for her. At least not right now, despite the lauded achievements.

TP Grant on Nicolini: "Nicolini is likely the best p4p female BJJ grappler in the world. She has won a major title in BJJ grappling pretty much every year going back to 2007. She specializes in guard play, but clearly to win that frequently you have to have game everywhere. She has a nasty toe hold, [and] frequently competes way above her 'natural' weightclass [of 115lbs]."

Gigantic card for women's MMA. I think this will be a little too much, too soon for Sara McMann, and we'll see another 1st round armbar from Ronda Rousey. It's got that Olympian vs. Olympian angle, so I'm definitely amped for it. Just wish Sara was given a bigger test than Sheila Gaff for christssakes.

Also on the card is a likely #1 contenders match between Jessica 'Evil' Eye (by far one of my favorite nicknames ever) and under-appreciated Canadian, Alexis Davis. Davis always brings it and I can see her getting tagged by Eye's jab over and over gain, but once it hits the ground she can grab a hold of a submission. Love, love, love watching her work on the ground.

I'll probably go more in depth for these UFC bouts closer to the card.