Bellator returns with a bang tonight from Uncasville, Connecticut -- Bellator 110 will host opening round action in the Light-Heavyweight and Featherweight tournaments with Quinton "Rampage" Jackson vs. Christian M'Pumbu at the helm.

Season 10 launches tonight on Spike TV at 9:00 p.m. ET with Bellator 110: "Rampage vs. M'Pumbu" from The Mohegan Sun arena in Uncasville, Connecticut. The nucleus of the 11-fight event is this season's opening round in the light-heavyweight (four-man field) and featherweight (eight-man field) tournaments, with half of the latter spilling into the seven-fight preliminary card. The prelims will stream live on Bloody Elbow and Spike.com with a 6:30 p.m. ET start time.

Christian "Tonton" M'Pumbu (18-5) became Bellator's inaugural 205-pound champ with a 3rd-round TKO of Rich Hale in 2011. The lanky, 6'2" kickboxer had a less than remarkable championship tenure that consisted of two decision losses: Travis Wiuff in a non-title bout and his first official defense to Attila Vegh, who subsequently overtook the light-heavyweight throne. After four Bellator appearances in 2011, M'Pumbu has graced the cage just once since (Vegh in 2013).

Former Pride FC all-star and UFC champion Quinton "Rampage" Jackson (33-11) was Bellator's prized acquisition of 2013. He exited the Octagon on a three-fight skid -- suffering defeats to Jon Jones, Ryan Bader and Glover Teixeira -- which Jackson attributes to a knee problem that was unable to be addressed due to his unwavering fight schedule in the UFC. Now, the "the old Rampage is back" storyline is in place and a first-round TKO of Joey Beltran in his promotional debut served as Chapter One. Jackson will return to the tournament format for the first time since Pride's 2003 Middleweight Gran Prix.

Range and distance should be the greatest factor against M'Pumbu, a lengthy kickboxer with quick and diverse striking, though potentially a tad undersized for the 205-pound weight class. M'Pumbu's bread and butter is a methodical, distance-based and kick-heavy onslaught from the fringe, which is a style that Jackson's struggled with in the past (Jones, Forrest Griffin). Rampage will undoubtedly look to barge into phone-booth range and transmit the thunder of his in-fighting arsenal, which has accrued the 35-year-old vet a total of 15 TKO wins in his career.

The sizzle of tonight's lineup is the potential of a Jackson vs. Muhammed Lawal (11-3) collision in the tournament finals, but "King Mo" will have to first surpass a stiff test in Russian Mikhail Zayats (22-7), who bears the vaunted title of "Master of Sports" in Combat Sambo.

On the heels of a 2011 defeat to Vinny Magalhaes for M-1 Global's light-heavyweight championship, Zayats has reeled off eight wins in nine turns with current interim champion Emanuel Newton (last season's tournament finals) standing as his only stumble. Beyond the Newton loss, Zayats has crushed all three of his Bellator opponents with first-round finishes (Seth Petruzelli, Jacob Noe, Aaron Rosa).

Lawal, a highly decorated wrestler and former Strikeforce champion, is looking to put a pair of defeats to the aforementioned Newton -- one by KO, another by decision -- in the rear-view mirror. Upon his 2013 arrival in Bellator, Lawal was heavily marketed and the subject of Spike TV specials; the same treatment "Rampage" is receiving now. However, after notching a TKO win in his debut, he was convincingly derailed courtesy of Newton's quasi-spinning-back-fist in his sophomore effort. "King Mo" got back to work with consecutive stoppages (Petruzelli by vicious first-round KO, Noe by 3rd-round retirement) but fell short by decision in the rematch with Newton.

Lawal's love for boxing has been received as both an undeniable improvement in his striking and a purported curse that's diminished his wrestling voracity. It will be interesting to see how he chooses to engage Zayats, a three-dimensional threat with laudable striking and clinch-work to supplement his submission specialty. 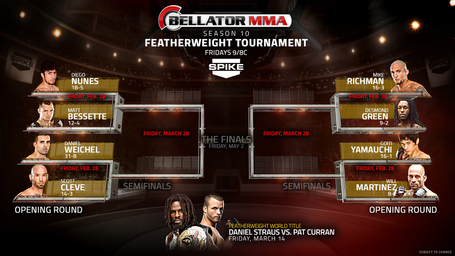 The remainder of the Spike TV main card will be shared by two quarterfinal bouts in the Featherweight Tournament: Matt Bessette vs. former UFC featherweight contender Diego Nunes and brawl-hungry wrestle-boxer Mike "The Marine" Richman vs. physical powerhouse Desmond Green.

The entire Bellator 110 cast and the latest MMA Vivisection video, which opens with discussion on the fight card, follow below.