UFC 170 featured a lot of electrifying finishes which, in MMA, almost invariably means at least some ground striking. BE's striking specialist Connor Ruebusch takes a look at the science of GnP.

UFC 170 saved us from the organization's recent stretch of dull cards with a whole slew of finishes and brilliant displays of technical violence. In MMA, a (T)KO almost always means a series of punches and other strikes on the grounded opponent. Ground striking is almost wholly unique to MMA in the world of combat sports--kicking, punching, clinching, and grappling can be found alone or in combination in many different sports, but aside from SAMBO (those crazy Russians), MMA is unique in its inclusion of strikes on the ground.

Many fighters strike haphazardly on the ground, wailing away with wild punches, or else smothering their opponents and throwing just enough meaningless arm punches to keep the ref from standing them up. This first part of the Tech Recap is not about that kind of run-of-the-mill, sub-par striking. Today, we're breaking down the good stuff: accurate, concise, deliberate--we're here to celebrate scientific ground and pound.

How many times have we seen a fighter get dropped, only for his opponent to lose control going for the finish and allow him to escape and recover? Effective striking on a grounded opponent starts with control. If you can't control the opponent's hips, posture, or ability to move away from strikes, then you'll have a tough time connecting with meaningful shots.

Stephen Thompson looked very impressive outstriking Robert Whittaker (more on that in Part Two tomorrow), but what stood out to me were his finishing instincts. Up until now, all of Thompson's UFC wins were either clean knockouts, or decisions. This was the first time that he was given the opportunity to show off his ability to follow a hurt opponent to the ground and keep him from recovering, and he did so admirably. 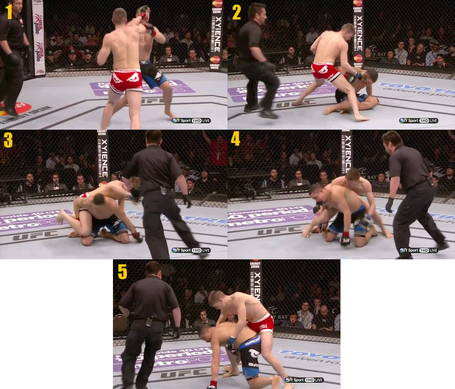 1. Thompson buzzes Whittaker with a solid right hand that drops him.

2. As Whittaker struggles to sit up, Thompson catches him with a right uppercut.

3. Whittaker, desperate to stifle Thompson's assault and get back to his feet, wraps his right arm around Thompson's leg and attempts to turn into him.

4. Thompson drops his weight onto Whittaker's back and spins, adjusting his angle so that he is once again behind Whittaker. Note the position of his right foot...

5. ...as he transitions from a low semi-sprawl to a taller stance with his right leg acting as a hook. In this standing back control position, Thompson makes it nearly impossible for Whittaker to stand, as his hips are being held in place by Thompson's hook.

Thompson finished Whittaker with a series of brutal shots, all but pinning Whittaker in a turtle position with his standing leg hook. The more MMA I watch, the more I think that half guard and this "partial back control" are the ultimate striking positions on the ground. A fighter can flow smoothly from one position to the other, and both enable him to keep control of his opponent's hips, without sacrificing the posture needed to land powerful strikes. Or, when he doesn't feel like throwing powerful strikes, the position also serves as the perfect base from which to play the bongo drums on the opponent's head (GIF).

Of course, this position is only an option against opponents who attempt to stand up and escape. For an example of what to do to opponents who choose to pull guard when hurt, we need only look to Erik Koch's KO win over poor, maligned Rafaello Oliveira. 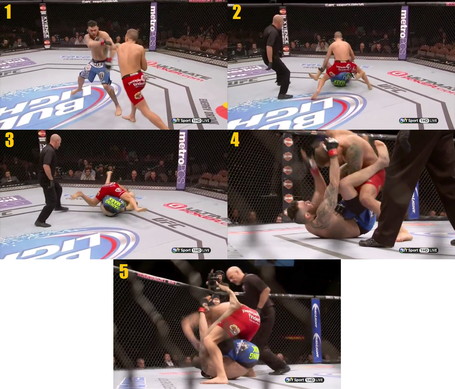 1. Koch connects with a clean left hand that puts Oliveira on his back.

2. Just like Thompson, Koch closes the distance with his grounded foe in a deep, wide stance. Unlike Whittaker, Oliveira elects to pull guard.

3. Koch dives down with a left hand that puts his hips right on top of Oliveira's, stacking Oliveira's guard in the process.

4. Oliveira reaches for a collar tie, but Koch denies him the leverage by posting with his left hand on Oliveira's hips (too low to be in danger of an armbar), and forces Oliveira to release the grip with a series of vicious right hands.

5. Koch keeps Oliveira stacked as he rains down hard, accurate punches. Oliveira cannot move out of the way with only his shoulders and head on the canvas, and the ref mercifully stops the fight.

Mike Pyle reasserted himself as one of welterweight' most reliable action fighters with a knockout win over TJ Waldburger at UFC 170. BE's striking specialist Connor Ruebusch breaks down his highlight reel spinning elbow.

BE's Connor Ruebusch brings you an episode of his podcast Heavy Hands, and a technique-focused interview with UFC flyweight and former Bellator bantamweight champ Zach Makovsky.

In this sequence Koch demonstrates the key difference between BJJ and MMA, and that's the value of aggression. Stacking the opponent is a fundamental technique in jiu jitsu, but typically the maneuver precedes an attempt to pass the guard. And once again, we were reminded with this bout that guard passing is just not a crucial skill for many mixed martial artists. Koch succeeded in stacking Oliveira, pinning him in place, and that was as far as he needed to progress in order to be effective on the ground. Coincidentally, Koch finished Oliveira in much the same way that Ricardo Lamas finished him last January (GIF). Control the opponent, posture up, and let the punches fly.

Aggressive striking can negate a lot of traditional grappling techniques, and even totally cover up some holes in a fighter's game. On the other hand, there are fighters with very dynamic, complete grappling games who brilliantly integrate strikes into their ground fighting. Zach Makovsky is undoubtedly one of those fighters. After a dominant performance against Scott Jorgensen in his promotional and Jorgensen's divisional debuts, Makovsky came back for another slick display of eerily Machida-esque striking and incredible-esque wrestling against a very game opponent in Josh Sampo.

With his last two wins, Makovsky has already established himself as one of the best phase-shifters in the UFC's flyweight division. When we talk about phase-shifting, we're usually referring to a fighter's ability to transition from striking to grappling, but we should also include the way that Makovsky integrates his strikes into his grappling after having already achieved the takedown. 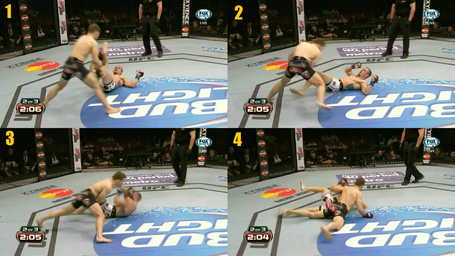 1. Makovsky secures control of the wildly kicking ankles of Sampo.

2. Makovsky executes a quick leg drag, yanking Sampo's left leg across his own body and creating a momentary opportunity to pass into side control.

3. Instead of simply passing, Makovsky dives into a left hand that catches Sampo on the cheek (check out the article photo!).

4. Makovsky lands in side control with his hips low, and only loses the position due to Sampo's preternatural scrambling ability.

This is something of a classic "MMA pass," but it works as a very effective part of Makovsky's already dynamic grappling game. What's great about this technique is that the mechanics of the leg drag flow perfectly into the left hand--pulling the leg across is more or less the same motion as pulling back on a right hook, and both motions bring the weight back and rotate the hips and shoulders to load up the rear hand. In short, it would be a completely missed opportunity not to throw a punch when executing a leg drag pass in MMA; it's just a natural extension of the movement.

And of course, it's no fault of Makovsky's that he didn't do more damage to Sampo with this technique, but I'll leave you with an example of how much power that diving punch/pass can carry, brought to you by our good friend King Mo Lawal.

Check back tomorrow for Part Two of this Tech Recap, and for coverage of UFC Fight Night: Macau.