How does being active get credit from MMA judges?

While striking your opponent is a good thing, MMA fighters can also get credit for missing. Bloody Elbow’s analytics expert Paul Gift reveals how judges are affected by missing with a look back at Nam Phan vs. Leonard Garcia 1.

Share All sharing options for: How does being active get credit from MMA judges?

What's the worst decision in UFC history? While there are a number of good candidates, I'd guess Nam Phan vs. Leonard Garcia at the TUF 12 Finale is at or near the top of your list. One judge scored the bout 30-27 for Phan, while the other two gave rounds 1 and 3 to Garcia for a split decision victory. Garcia was the more active fighter in the first and third rounds, but his activity included wild haymakers and a lot of missing. 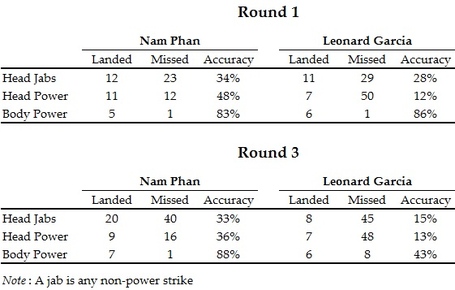 In these pivotal rounds, Phan out-landed Garcia in almost all key striking categories and had better accuracy, while takedowns and ground control were not major factors (Garcia had one takedown in the third round with about 30 seconds of ground control). The only thing Garcia had going in his favor was misses. Is it possible that Garcia won these two rounds - and therefore the fight - by swinging and missing?

Before we talk about judges, let's first look at knockouts and submissions. I've analyzed the fight data and - as you'd probably guess - throwing strikes and missing doesn't help you get a TKO or tap out. In most cases missing is benign, but some power misses lower your chances of a finish - likely because you have worse striking skill, gas out, or get desperate. But there are two ways to win in MMA: finish the fight or get a decision. Missing doesn't help you finish, but does not hitting your opponent earn points from the judges? To answer this we have to get all nerdy and go to the data: judge scorecards and FightMetric's performance statistics. The actual analysis would bore you, so here are the results.

You earn the most points for landing a power strike to your opponent's head. Let's call it 100 points. You also get points for missing to the head. On the same scale, missing a jab to the head is worth seven points while missing a power strike to the head is worth 10 points. So what's going on? One possibility is that judges find it difficult to see whether a head strike lands or misses in the middle of the fast-paced action. Another possibility is that being active and missing has value to judges through the appearance of "control of the fighting area," one of the judging criteria of the Unified Rules of MMA.

With body shots, missed jabs aren't worth any points, but missed power strikes are worth a whopping 31 points. Power body strikes usually come from a position of control in the clinch or on the ground. The appearance of control could make power misses look that much more dominant. It also may be difficult for judges to see if a body strike lands, especially if the action is against the cage. Was a knee to the body blocked by the opponent's arm or did it slip through? It's not always easy to tell.

With strikes to the leg, jab and power misses don't get any points from the judges. This makes sense as the majority of strikes to the leg are kicks - unless you're Bendo doing your leg punch - and it's pretty easy to see when kicks whiff or are checked.

Since some misses score points, is it possible that missing your opponent could be better than hitting him? As weird as it seems, yes. Missing a power shot to the body is worth more points than landing a jab anywhere. Jabs landed to the head, body and legs are worth 19, 0 and 24 points, respectively. In round 3, Leonard Garcia landed 12 fewer jabs to the head than Phan, but made up for it by missing seven more power strikes to the body. Phan's jabs hit their target but each of Garcia's missed power shots scored more points. Now before you take this information and go crazy, let me remind you that these numbers represent likely points scored from typical fight situations and strikes. It doesn't mean that flailing about like a maniac with wild power misses for five minutes will win a round.

The next step is to see if missing can actually change scoring decisions. By modeling MMA judge behavior, we can predict what likely would've happened had they not placed any value on head and power body misses. In this case, around 3.42 percent of rounds scored would change winners. Another way of saying this is that roughly 3.42 percent of rounds are won by one fighter being more active than the other with misses. Since most event cards these days average around 60 scored rounds (1 round = 3 scored rounds), roughly two of these scored rounds are affected in a typical event due to missing. If these scores are the difference between a decision win or loss, continuing towards a title shot, continuing in the promotion, or getting cut, then it definitely pays to be active.

Here are a few more examples of rounds that were likely affected by misses and would have changed the outcome of the fight. "New Winner" is the predicted round winner if head and power body misses weren't given any points by the judges.

I only include fights where I know the judges' scorecards. I'm guessing the ones that stand out are Shields vs. Woodley, Rampage vs. Machida and Rampage vs. Griffin. As if we needed more fuel to throw on the debate fire when talking about these fights, now there's scientific evidence to throw in the mix.

Are there any a fight questions you'd like analyzed? Send them to paul.gift@pepperdine.edu or @MMAanalytics on Twitter. Fight data provided by FightMetric.