It's good month for WMMA. Get the low down on the significant WMMA action in weeks 1-3 of March.

Catherine Costigan vs. Irene Cabello (this will either air on the Cage Warriors Facebook page or MMAJunkie.com)

Catherine Costigan (fantastic name, by the way, makes me think of Leonardo DiCaprio's character in 'The Departed', Billy Costigan) is someone to watch in the atomweight division. Standing 5 ft 4 inches tall, she is big for 105lbs. Although the atomweight division is still in its infancy, she has been able to finish all her opponents. She is 34, so age is definitely not on her side, but she's shown improvement in each fight. She has respectable skills in each aspect of MMA. 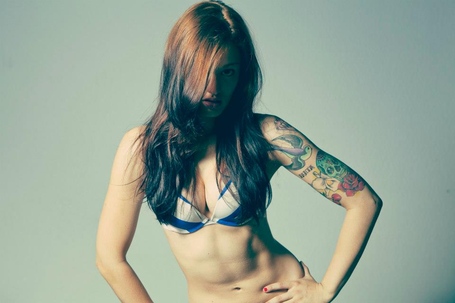 She has one win, and one defeat in Super Fight League. Hopefully the Spaniard has improved. I'm noticing European girls are tall and slender whereas CAN/USA girls are shorter and more muscular.

Markos is one of my favorite up-and-coming strawweight fighters. She put on a helluva fight in January, despite losing. She took a lot of damage in that fight (worth watching), but showed her reserve battling back in round 3 after dropping the first two. And I love that she's fighting again so soon. She'll have her hands full against 2-0, Lynell House. House has quick hands, and will likely have the striking advantage over Markos. House can throw combinations moving backwards, uses movement to avoid getting trapped along the cage, something she had to use against much bigger fighters she was fighting. The only ground work footage I could find of House was in 2012, and she is still very green. And Markos will eat that up.

Looking forward to House at 115, check out her work against a pressuring, and much larger 135er

Johnston is VIOLENT! I never caught on to her last year when she was involved in this great, sloppy "heavyweight" esque fight in her MMA debut, which would have probably ended up in the FOTY or ROTY nominees. There is no division for girls at 145lbs+, but this girl throws down.

Sherilyn Lim vs. Ann Osman 2 (airs on www.onefc.livesport.tv for US $9.99, this is on the prelims so it could be free... I'm shocked this isn't on the main card)

This is a strange booking. The first fight was between two fighters, not quite refined in their abilities, that went full-throttle to claim their first MMA victory (a ROTY runner-up). Now, I don't know if it's a lack of fighters in Asia (excluding South Korea and Japan), but now their 2nd MMA fights will be a rematch. It hasn't even been half a year for Lim, 23, and Osman, 27, so we'll see how much improvements they've made. And one other important thing to note, the first bout was in Lim's home country (Singapore), this time it's in Osman's (Malaysia).

Osman: "Well, we'll just have to see about that."

"I'm not going to let a Singaporean city girl come into my house, here in Malaysia, and get the win." - Osman

It's still very common for women fights to get made on very short notice even for a top ranked girl like Yamaguchi. One of the top Strawweights for the past few years, Yamaguchi has stated she will be dropping to 105lbs. TBA is wildly inconsistent, so like UFC 137 says "Expect The Unexpected".

VV Mei confirmed she will be fighting.

The Queen of Swords is back! Fresh off losing in the CFA Featherweight finals, Fox returns to bantamweight against Heather Bassett. I'm not even gonna talk about the transgender stuff, cause frankly I haven't read anything conclusive, so I'll just judge her like any other fighter. She has looked good in all her fights. Her explosiveness and body coordination makes her an intriguing fighter at 135. Her latest fight against Ashlee Evans-Smith showed signs she might lack a little fight IQ, ala Erick Silva, Melvin Guillard.

However, I doubt Bassett can exploit it the way AES did. Bassett is moving up to 135lbs and has a loss to now 115lbers Rose Namajunas. Few things I like about Bassett. She has really long arms and legs. Tricky kicks with both legs. She'll back you up with punches then finish with the kick. Or, she'll kick and fire off a punch straight away. Something WMMA legend Hisae Watanabe was very fond of. Bassett could surprise here.

Fighters are use to combos ending with the kick, just like this poor Asian lady here, thinking the combo was over. Moved forward only to get countered with a straight right. Also, note Watanbe had a left hook ready if she didn't get the knockdown. Go read Jack Slack's article on Watanabe, and watch some highlight videos and fights of her.

Shaparenko. She was born in 1995. NINETEEN NINETY-FIVE!

Kamila Porczyk vs. Iryna Shaparenko (Kamila is 5 ft 7 and Shaparenko is 5 ft 9. Both are quite tall for flyweight. Especially Shaparenko. I wouldn't be surprised though if these aren't their actual heights. It's like padding your resume.)

Ugh. Another girl's name that has the "czyk" combination that I can't seem to ever remember... I don't exactly recall how I heard of this woman, Porczyk, but she is/was some kind of fitness champion/muscle model. This is plain scary, but here she is at her, I'm gonna say, most inhuman. Okay, and here's one where she looks human and have another. She's 36 and made her debut in 2013, winning in the 1st round, her only fight.

On the other hand, Shaparenko is 18-years-old. Sporting a 5-0 record, and fighting out of Ukraine. There is little to no footage on either girls, but it doesn't seem like KSW (Poland's top MMA promotion) is trying to build up fellow Pollack, Porczyk, with gimme fights. If you saw the video I linked, you can see Porczyk will have a strength and flexibility advantage over almost every opponent. Just the fact Shaparenko is 18 with 5 fights to her name, I am intrigued with her future.

Check out this PROFESSIONAL MMA bout of Shaparenko... A crowd is standing outside, surrounding a boxing ring, while there are cars and trucks passing by in the background. Crazy stuff. I think they literally put on boxing ring in a park or something.

Go to 8:51 for a strange submission. It was like an inverted modified triangle scissors choke