Hello there lineal title fans! This Saturday is another UFC PPV and it's not short on lineal title action. Jose Aldo has been the Lineal King of the Featherweight division for 5 years and 8 defenses, a reign only Fedor, Tara LaRosa, and GSP have bested in their respective weight classes. Since Aldo and Mendes last fought in 2012, Aldo has defended his titles 3 times and added 7 lineal titles to a collection which now totals 18 belts, good for 6th place on the Lineal Title Leaderboard. For his part, Mendes has gone 5-0 since their last meeting and captured the lineal Cage Fury Fighting title from Darren Elkins. Whomever wins this rematch will boast 19 lineal titles and 42% unification of all belts in the Featherweight division.

Before we dive into the details, here's a quick reminder of the rules that I follow when tracing these lineages:

1. All titles trace back to the given promotion's inaugural championship, unless specifically noted

2. Only bouts contested within the weight class for which the belt was created are counted in the lineage. (See Rule 3 for exceptions)

4. If a title dead ends due to change of weight class or retirement, the next title issued by the promotion will be considered. I will refer to each issued title as an "iteration" of the belt (1st iteration, 2nd iterations, etc.)

5. No Contest rulings will always be respected (i.e. Diaz vs Gomi: Diaz tested positive for marijuana, so the fight does not effect the lineage)

6. TUF fights are exhibitions and will generally not count in the lineage of a title. TUF 20 for the Strawweight title may be an exception if it comes into play 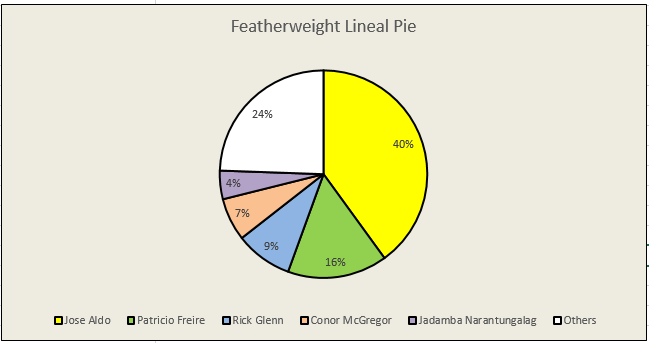 Lineal Title Fights on the Horizon: