Urijah Faber, so long the second-best, makes what might be his final run at the bantamweight title this Saturday. BE's striking specialist Connor Ruebusch takes a look at his chances by breaking down the improvements Faber has made under coach Duane Ludwig.

Share All sharing options for: UFC 169 Judo Chop: Urijah Faber--Leader of the Pack?

Urijah Faber, for all his popularity, has been static for most of his career. Some might even say that Faber, after five failed title bids, has grown stagnant. Ever since losing his featherweight strap to Mike Brown in 2008 Faber has gained a reputation as the perennial bridesmaid-always better than every fighter in the division but the champion, and a move to bantamweight after his infamous shellacking by Jose Aldo failed to improve his fortunes.

Hardcore fight fans might, therefore, be disinterested in Faber's next fight against newly crowned UFC bantamweight champion Renan Barao, who used his dynamic kickboxing to outwork Faber once before.

Hold on to your presuppositions, though, because Barao will be dealing with a very different Urijah Faber this time around-a Urijah Faber with an ace up his sleeve. And that ace is named Duane "Bang" Ludwig.

"Bang" joined Faber's Team Alpha Male as head coach in December of 2012, half a year after Faber's loss to Barao. Since then, every member of the team has shown serious improvement (check out my breakdown of TJ Dillashaw's whoopin' of Mike Easton here). Some fans have expressed reservations about Ludwig's true impact on Team Alpha Male, saying that their recent success (and substantially increased knockout rate) has more to do with quality of competition than with more intelligent training. Certainly my own assertion that we would see clearly the fruits of Ludwig's labors in Joseph Benavidez's rematch against flyweight champ Demetrious Johnson last December was quickly debunked by Johnson's own much-improved striking, but as an absolute fight geek and someone who spends time just about every day watching fights and picking them apart, trust me when I say that tomorrow's fight will not look like the first one did.

Do I think that Faber will win? Honestly, I don't know. Barao is an incredible fighter, and has a distinct mental advantage over his never-quite-a-champion foe. But I am certain that Faber will bring a different style into this rematch. Let's take a look at the improvements he's made over the last year, and I'll let you decide if he's capable of finally capturing the bantamweight throne.

Every one of the Alpha Males has enjoyed improved footwork under Ludwig's tenure, and Faber is no exception. Up until the Barao fight, it was Faber's wont to constantly switch stance, sometimes even standing completely square in front of his opponent. 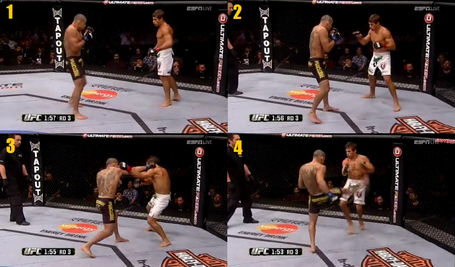 1. Barao backs Faber up toward the fence.

3. With nothing but sheer athleticism protecting Faber's centerline, it's a simple thing for Barao to connect with a stiff right hand.

4. Barao bullies Faber back into the fence as he attempts to circle away, his hips and shoulders still square to his opponent.

There are those who switch stances well, such as lightweight champ Anthony Pettis or newly-christened middleweight Lyoto Machida, but the vast majority of fighters don't fight well out of both stances. In fact, more often than not, the constant switching is a clear sign of desperation. This was certainly the case for Faber. He would switch stances when he was out of ideas, or didn't know how else to approach his opponent. As always, Faber's approach to striking was wholly unscientific, but worked against most of his opponents via sheer athletic ability.

Post-Ludwig Faber is marked by one very distinct and very apparent difference: he's an orthodox fighter, and he looks like it. Though the structure of his wrestler's stance is no different than it was before, the frequent and pointless stance switching is gone. Rather than searching desperately for openings, Faber is now equipped with a number of intelligent set-ups and traps to facilitate both his striking and his wrestling, all of which came to a head in his most recent fight against Michael McDonald.

Faber's always been a right hand-centric fighter, but he used to rely on his power hand going forward. Over the last year under Ludwig's tutelage, Faber has steadily grown in his abilities as a counter puncher. Already equipped with a natural sense of timing, all Urijah really needed were some set-ups, and now he's got them.

1. Faber busts out some flashy dance moves in front of Michael McDonald, something else Team Alpha Male seems to have learned from Ludwig.

2. As McDonald steps into range, Urijah immediately steps back.

3. McDonald attempts to jab his way in and Urijah counters him with a teep...

4. ...which once again pushes McDonald out of range.

5. Out of ideas now, McDonald resolves to reach Faber with his jab, committing to a deep forward step. This time Faber stands his ground, slipping the jab...

6. ...and connecting with a thunderous counter right hand.

Benson Henderson and the Art of Bullsh*t

Many fans feel that Ben Henderson did not deserve his split decision win over Josh Thomson in the main event of UFC on Fox 10. BE's striking specialist Connor Ruebusch takes a look at what Bendo did to convince the judges.

Interested in the different striking styles found in MMA? Then join us for our series "Striking Styles". Here, part 1 of our 3 part series breaking down the different styles of Muay Thai, as we examine the true Thai style of this striking art.

Cross counters of this kind are quite common in MMA, simply because so many fighters rely on their power hands for punching, but most are incidental, or landed while the opponent is going backward, desperately and thoughtlessly pumping their jab in a futile attempt to keep the attacker at bay. That was not the case here.

Though still raw in many aspects of MMA, McDonald is certainly one of the better boxers in the bantamweight division. In addition, he had a height and reach advantage over Faber in this fight. To get around that, Urijah frustrated his young opponent with movement throughout the first part of the second round, sticking him with kicks and body punches and then dancing out of range. The push kick in the sequence above was the final straw, convincing McDonald that, if he wanted to reach Faber with his jab, he needed to move fast and hit hard. By goading McDonald into this aggressive forward movement, he forced his opponent to negate his own reach advantage, lunging right into a brick of a right hand.

As brilliant as the sequence above was, however, it was only the second best right hand of the night. Following that sequence, Faber showed excellent composure: it quickly became clear that McDonald was fully recovered from the first right hand, so went right back to his frustrating distance-control gameplan, albeit with a few more pot-shots mixed in. Three minutes into the second round, McDonald semi-landed a head kick, and jumped on the perceived opportunity, much to his chagrin. 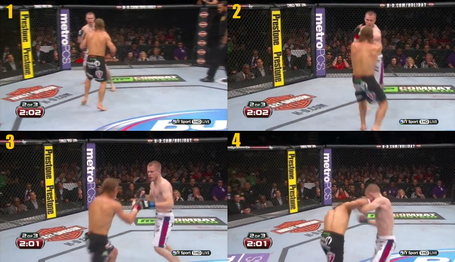 1. McDonald thinks he has stunned Faber with a glancing kick to the head.

2. He advances on the California Kid with a barrage of punches, though Faber quickly backs out of range.

3. Seeing that McDonald is determined to reach him, Faber pivots, cutting a sharp angle to his left.

4. As McDonald adjusts to face him, Faber plants his feet and cracks him with an overhand right.

Before this round, Ludwig gave Faber some very specific advice. "Keep that erratic pace," he instructed him, "And I want you to touch, pull him, and turn. He's overcommitting . . . when he throws a power shot, so just touch him, pull him, and turn."

This is perhaps the most promising thing about Faber's upcoming title shot. Not only does he have a knowledgeable coach to strategize for him now, but he listens. Ludwig wanted him to pull McDonald toward him and then cut an angle, and that's exactly what Faber did. As such an evidently coachable fighter, it almost makes you mourn for what could have been had Faber found a trainer like Ludwig sooner.

Last time out Barao was able to push Faber back into the fence over and over again, forcing him to keep his distance with punches, kicks, and flying knees. Imagine how differently that fight would have played out had Faber possessed the understanding of angles he demonstrated here against McDonald, or if he had someone like Ludwig in his corner to make round-by-round adjustments for him?

So what do you think? Urijah Faber has been within reach of the belt for years now, and this may in fact be his last chance to prove that he is the number one bantamweight in the world. After so many failed attempts at the title, Faber and his fans have probably become quite discouraged, but we are now witnessing a different California Kid from the one we've seen before, and he's only gotten better over the last year.

I urge you to watch and listen for two highlights of tomorrow's main event: 1) Faber's striking, which will likely be even better than it was against McDonald, and 2) Duane Ludwig's corner advice, because it often precedes a spectacular display of intelligent fighting technique.

For more baseless conjecture, as well as occasional fight analysis and fighter/trainer interviews, check out Heavy Hands, the only podcast that focuses on the finer points of face-punching. The latest episode features an interview with boxing trainer Daði Ástþórsson. Now available on both iTunes and Stitcher.