In the final installment of his look at Ronda Rousey's judo clinic at UFC 168 against Miesha Tate, T.P. Grant looks at her utilization of a little-used technique in MMA that eventually set up her fight-ending armbar.

In the first part of this series I looked at how UFC Women's Bantamweight Champion Ronda Rousey used the Uchi Mata to counter the outside trips of the challenger Miesha Tate in the first round of their UFC 168 bout. The second piece looked at the perfect Harai Goshi Rousey put on Tate in the second round. In this final installment we will look at the Sumi Gaeshi, or sacrifice throw, Rousey used early and then in the third round got her fight-ending armbar off a failed second attempt.

The chaining of takedowns is critical to success at the higher levels of Olympic Judo, just as it is in wrestling. Elite Judoka have a very minute feel for their opponent's balance and momentum. By the nature of humans only having two legs there is always a direction they can be moved where they will be off balance, but through movement, footwork, and adjusting their balance expert grapplers are excellent at hiding that weak direction.

So in Judo to help find that direction of weakness, competitors have a throw they like to use for every direction, and when an opponent is driving straight into a Judoka, one option they have to is execute what is known as a sacrifice throw. The Japanese name being Sumi Gaeshi, a sacrifice throw is named as such because the thrower must first fall to the ground and then throw their opponent over them.

One of the original 40 throws of Judo, the Sumi Gaeshi is a staple of some Judoka's competition games but it is very rarely seen in MMA because of the risk a sacrifice throw presents. So let's take a look at the throw in Judo first and then how Ronda pulled it off in MMA.

Take note of the Sumi Gaeshi as a follow up to the Uchi Mata at 0:42 in this video because that is exact technique Rousey used in the fight.

Now let's take a look at the action.

The first throw came almost instantly in the fight - Ronda clinched and they engaged in some positional fighting in the clinch. 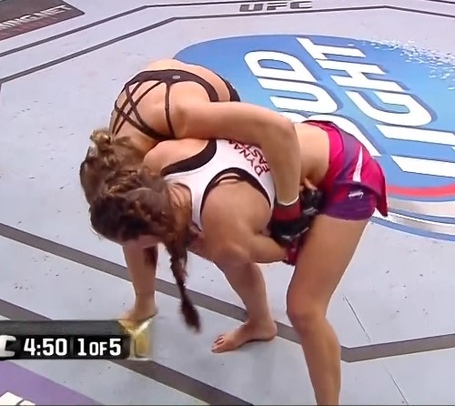 Above is a picture of the fight ten seconds in. Ronda has her left arm across the back of Tate, controlling her posture and Tate is working hard very hard to not let Ronda step in front of her. They work their way towards the cage. 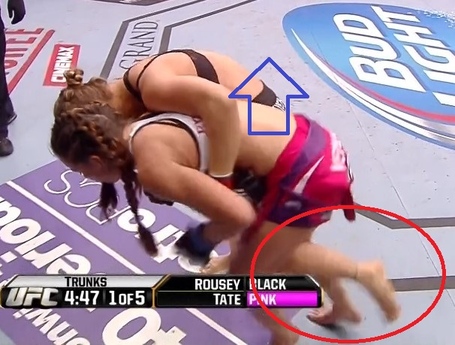 Rousey is able to step in and get her leg in for an Uchi Mata, as circled in red. Tate begins to defend, by trying to posture up and not allow her weight to be taken forward, the direction of the throw. Tate has changed her weak direction, she is pushing her weight in the direction of the blue arrow, which means the Uchi Mata in not longer the best option for Rousey. 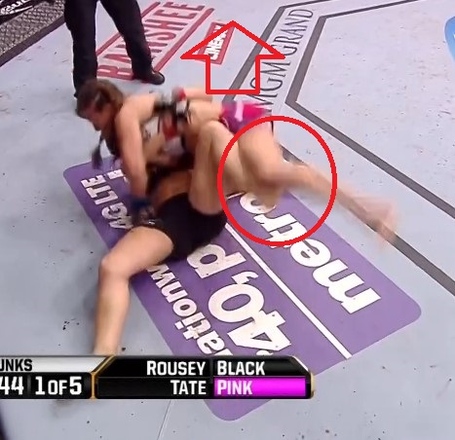 Rousey keeps Tate tight to her and then sits back, rolling back in the direction that Tate was pushing her. Now if this is all Rousey did against a competent grappler all she would be doing is pulling side control as Tate would sink her hips down and kill the momentum of the roll.

But Rousey has hooked her left foot in Tate's knee, circled in red. This is a key detail of Sumi Gaeshi as this makes impossible for Tate to lower her hips and she is tossed over Rousey. 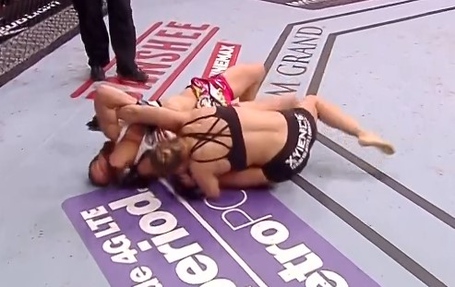 Now Tate does her wrestling background justice he and she executes an excellent wrestler's bridge here, pushing hard with both legs and using her head as base to stop her back from being put flat on the mat and from the throw being completed.

Tate is able to keep turning towards Rousey, using a strong whizzer over hook, get to her knees and escape to standing. 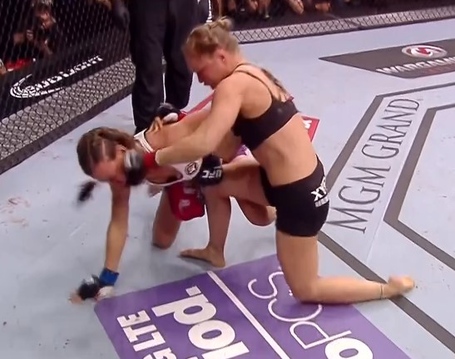 During the transition Rousey is able to flex a bit of the work on expanding her game as she begins throwing punches in transition, something rather new to her as she strikes to Tate's face with both punches and knees as Tate is focused on trying to disengage.

A gif of the throw.

Now when going for a sacrifice throw, a grappler needs to have a back up plan when attempting it because if it doesn't work they can find themselves in a bad spot. For Rousey her Plan B is her Plan A, the armbar.

So let us jump to the third round of the fight for Ronda's second Sumi Gaeshi attempt. 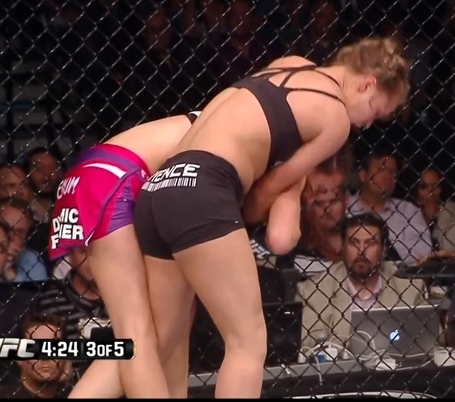 Early in the third Ronda gets Tate against the fence and is pushing into her, stepping in for the Uchi Mata, likely attempting to get the same reaction from Tate as she did in the first round. 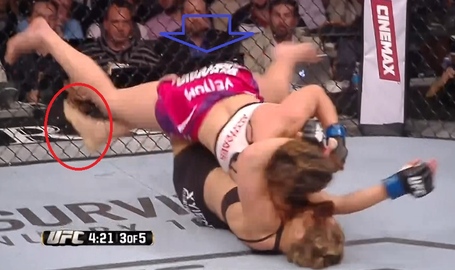 This time when Ronda sits back she isn't able to hook her foot into Tate's knee, circled in red, and Tate is able to sink her hips down, killing the throw. Tate is then able to circle her hips around and take Ronda's side. 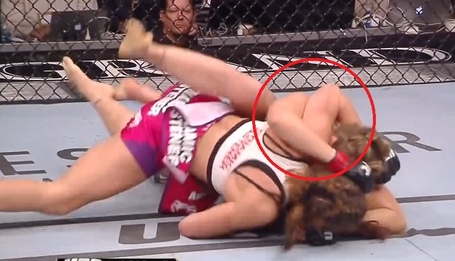 As Tate is coming around Ronda attempts to set up a half guard. Ronda wins the battle for the underhook, circled in red, but is unable to get her half guard closed. At the point Ronda's guard is about to be passed, if Ronda lays back she surrenders side control. If Ronda tries to roll to her knees she will initiate a scramble and very possibly give up her back.

So Ronda does something that likely made quite of few competitive grapplers crack a smile - she inverted her guard. 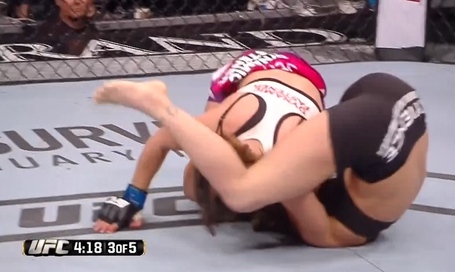 Rousey kicks her right leg over the back of Tate and rolls on her shoulders to go upside down in what is a common solution for a near guard pass, inverting the guard. It keeps the legs in play, stops the top player from getting control, and prevents giving up the back in a scramble.

Now inversion is not often used in MMA because it is a risky and exposed position so when it is used, it is as a transition to another position, not as a guard position in itself. Rousey quickly slips her head out and ends up in top position, attacking an armbar from the turtle position.

From there Rousey attacks with a juji gatame, a rolling armbar, which has been covered a few times in Judo Chops before. Therefore I will not go into detail, but I will link to previous articles in the notes and feature this video of 2008 Olympian Matt D'Aquino demonstrating the juji gatame.

Once Tate has been rolled over there is a slight variation on the armbar from Ronda's normal finish, so let us take a closer look. 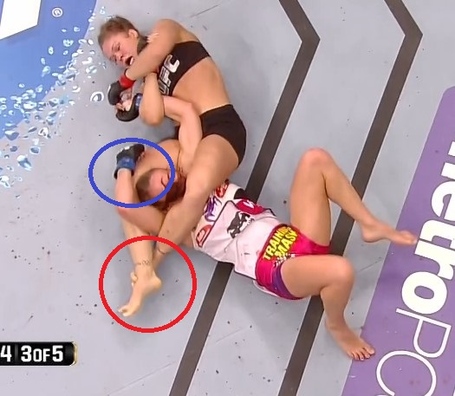 Tate's head is not covered by one of Ronda's legs, but the armbar is still finished. The reason that is able to work is because like in a triangle armbar, Rousey has such a strong control of Tate's upper body there is no way she can sit up to relieve the pressure on her elbow.

Now Rousey crossed her feet, circled in red, and, some might know, that many grapplers are taught when first learning the armbar that that is incorrect. The reason they are taught that is, often when novice grapplers cross their feet on an armbar, they provide an easy lever point for their opponent to push on and free themselves. But Ronda has trapped Tate's right arm between her legs as well, circled in blue, making that escape impossible. This is how to cross one's feet correctly while doing an armbar, but often that distinction is too complicated for a novice grappler and they are just told not to cross their feet.

From this position Ronda is able to drive her hips in with great power and while Tate was accused by some of tapping early, from this angle you can clearly see the quick pressure put on her elbow.

Gifs of the failed throw and resulting rolling armbar can be found in those links.

That puts a cap on our recap of Ronda's amazing technique at UFC 168 and for those of you who stuck it out to this final piece here is a little treat, a video of Travis Stevens, two Olympian in Judo and BJJ double black belt, and Jimmy Pedro, a four time Olympian, 6th degree Judo black belt, and US Olympic Coach breaking down how to defend Ronda's rolling armbar.

How to Counter Ronda Rousey's Armbar, by the Guys Who Taught Her (via Stephan Kesting)

Big thank you to gif master Zombie Prophet I used in this series, one I borrowed from BE community member and gif master Grappo, and I Iinked more than a few from the Art of Grappling WordPress and their rundown of the Judo Ronda used in the fight as well.