Stats, facts and figures summing up the year in fights for the UFC, with an infographic displaying the most important numbers and charts.

2013 was an interesting year for the UFC. It was quite possibly the best year ever in terms of card quality, especially in the last 6 months. We saw GSP "take a vacation," The longest reigning UFC champion ever dethroned and the introduction of women into the UFC.

All of that is fascinating, but what really grabs me is the numbers behind all of that. Why were the cards in 2013 so exciting? What makes the perfect event? How many times did lone judges skew scorecards? Well, that's where looking at the facts, figures and stats come in, so that's exactly what I decided to do.

First, here's a fun infographic showing some of the statistics that made up the UFC's 2013: 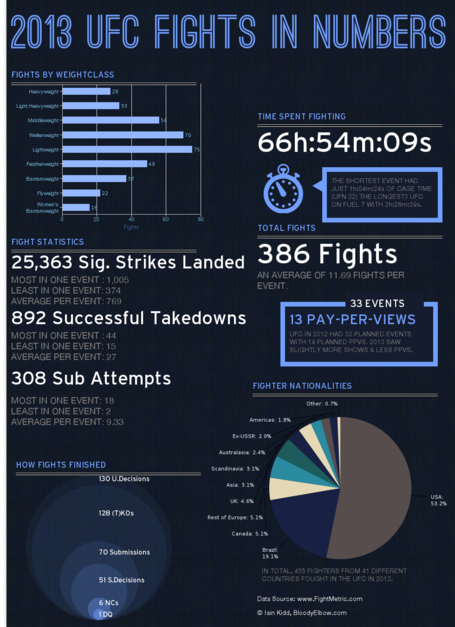 25,380 significant strikes were landed in total in 2013, which was an average of 6.45 strikes every minute spent inside the cage. In comparison, just 0.22 takedowns were completed per minute; 13.60 every hour.

The most action-packed event of 2013 was Ultimate Fight Night 30, with 8.48 strikes per minute. It also had 0.15 takedowns per minute and 0.07 submission attempts per minute. This all occured over 1 hour, 39 minutes and 32 seconds of cage time.

Despite the UFC's global popularity, the majority of athletes are still from the USA. Of the 455 fighters who competed inside the Octagon this year, 53.2% of them, 242 in all, are American. The UFC's expensive efforts to expand into Europe are starting to pay off, though; there are now almost three times as many Europeans in the UFC than Canadians (67 vs. 23), and almost as many Europeans as there are Brazilians (67 vs. 87). Asia is still very underrepresented. Despite being the home to almost half of the world's population, Asia makes up just 3.1% of the UFC roster who competed in 2013. The 14 Asian athletes are likely to be joined by several more after the conclusion of The Ultimate Fighter: China in 2014, however.

Discounting DQ's and No Contests, the rate of decisions to finishes was roughly 51.5% finishes to 48.5% decisions. (T)KO's were by far the most common method of a fight finishing, with 128 of the 198 finishes coming by referee stoppage. Submissions accounted for just 70 of the finishes. 181 of the fights went to a decision, 6 were ruled No Contest for various reasons, and one ended via DQ.

Split decisions occurred frequently throughout the year; roughly one in every three fights that went to the scorecards would have a judge seeing the fight significantly differently from his peers. An event was more likely to have two split/majority decisions (30%) than it was to have none (21%). Roughly 18% of cards had 3 or more split/majority decisions (12% had 3, 6% had 4). In total about 12% of all fights ended in a split decision.

The lack of official draws in 2013 was also interesting. Bigfoot Silva and Mark Hunt technically went to a majority draw, but the result was overturned in Silva's case to become a No Contest. Other than this bout, there were no draws in 2013.

The UFC introduced the Women's Bantamweight division in 2013, but despite the popularity of champion Ronda Rousey, who drew an estimated 450,000 PPV buys in her debut, only 16 women's fights took place in 2013. The UFC currently has 19 women under contract at bantamweight, meaning each fought just 1.68 times on average.

Average number of fights per fighter for each weightclass*:

*Numbers based on fighters currently under contract divided by number of fights in the weight division. This is slightly less accurate than counting the total number of fighters who fought in each weight class.

Thanks to Steph Daniels, Zane Simon and McKinley Noble for their help with this piece. Thanks also to FightMetric.com, which was the source of data for many of the statistics. Any incorrect statistics are probably due to errors on my part while collating the numbers.