Denied an unlikely title shot by fate, Josh Thomson is now set to face former UFC lightweight champ Benson Henderson to reestablish himself as no. 1 contender. BE's striking specialist Connor Ruebusch breaks down the slick takedowns that could lead to a win for Thomson this weekend.

In his last three fights, Josh Thomson has proven himself to be a top lightweight, if that still wasn't clear beforehand. He shut down KJ Noons with a stifling top game in an unexciting but still impressive performance. He fought a tough trilogy-closer against Gilbert Melendez that ended in a controversial win for Gil, that nonetheless reminded the world that Josh Thomson was still capable of great things, especially considering the tough fight that Melendez was able to give UFC champion Ben Henderson in his next fight. Then Thomson made his mark in the UFC with a definitive knockout win over Nate Diaz, utilizing clever footwork and set-ups to hand the Stocktonian his first ever loss to strikes.

A veteran of thirteen years, Thomson is one of the most well-rounded fighters in the lightweight division, but he is not without his flaws. Ben Henderson has been drawn into his fair share of slug matches, but his wrestling and grappling is unquestionably solid, and as impressive as they were, Thomson's last three performances were against three men who are primarily, if not exclusively, strikers. The last time Thomson fought a wrestler of Henderson's caliber things didn't turn out so well for him; hardcore fans will find it difficult to forget how he was mauled by Tatsuya Kawajiri not so long ago.

Still, Thomson's experience counts for something. After all these years, and 26 professional fights at the top of the sport, Josh Thomson has learned a few tricks. One of the best techniques in his arsenal is a trip takedown that he's become quite adept at mixing into his varied striking attack. That just might be the key to winding up on top when the fight with Henderson does eventually go to the ground. Let's break it down.

The trip or sweep in question is almost certainly a product of Josh Thomson's time with Dave Camarillo at AKA, because it is very much a Judo technique. Judo terminology being what it is, however... it's a little hard to determine exactly which judo technique it was. Josh's attack bears the most resemblance to Kosotogari, or "small outer reap."

In this excellent instructional, you can see the basics of the technique itself. Instead of sweeping with the side of the foot, Thomson tends to hook the opponent's leg as one would for Osotogari, but the mechanics of the takedown are more or less the same otherwise. What's more important than the specific placement of the feet is the set-up for the technique. Without first off-balancing the opponent, the trip is sure to be ineffective. While pure Judo focuses on off-balancing the opponent using grips, Thomson has learned to set up his takedowns from striking range, using his punches to force reactions out of the opponent.

After two rough rounds, Josh Thomson badly needed to steal the momentum away from Gilbert Melendez in their last fight, and he did so with a perfectly timed punch. 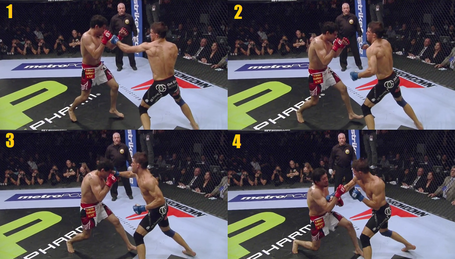 1. Backing up, Josh measures the distance with a jab as Gilbert continues to move forward.

2. Josh drops his weight, stepping into a right hand. Having had success dipping and slipping punches earlier in the fight, Gilbert attempts to move into and below the right hand...

3. ...but he's too far out of position, and Thomson's punch smashes into his head.

4. Never say that Gilbert Melendez doesn't have a chin, because that near perfect punch didn't put him down.

Despite staying on his feet and quickly regaining his composure, Melendez was suddenly forced to respect the punching of Thomson. The rest of the fourth round saw a far more respectful Gilbert reacting to Josh's feints and attacks with caution, rather than disdainfully marching ahead with counters. And once Josh had reestablished that he was a real threat on the feet, he was able to bring it to the ground gracefully. 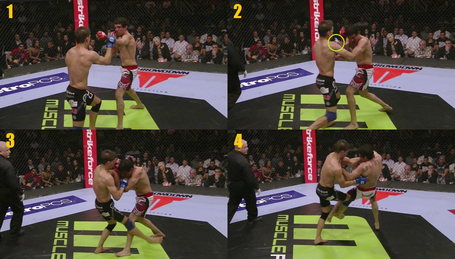 1. Thomson feints with his right hand, drawing a defensive jab from Gilbert.

2. Thomson reaches to grab Gilbert's outstretched left arm with his right hand, while meanwhile his own open left hand (circled) comes around the side.

3. Melendez reacts to the left hand as if it were a hook, blocking the right side of his head with his forearm and dropping his weight back to absorb the punch. At the same time, Thomson extends his right leg behind Melendez's suddenly light left leg.

When he's not relaxing on the ranch with Leonard Garcia, Donald Cerrone is usually kicking people in the head. BE's striking specialist Connor Ruebusch breaks down Cowboy's signature technique.

4. Thomson makes a steering wheel motion with his hands, pushing Gilbert to his own left, and simultaneously sweeps away his left leg just as he is about to place his weight on it, sending Gilbert to the ground.

I highly recommend you watch that GIF, as it is one of the most beautiful blendings of grappling and striking in recent memory. Without the grips and traction of a Judo gi, Thomson needed to force Gilbert to shift his weight with his strikes. Thomson was completely safe to casually reach out and place his hands on Melendez, all thanks to the short right hand he had landed earlier in the round. The icing on the cake is that Thomson landed on top of Melendez and immediately followed up with ground strikes, as if to display to the audience every facet of mixed martial arts he could.

Then again, we've already mentioned how Ben Henderson likes to slug it out with some opponents. What if Josh can't force the former UFC champ into a defensive shell to set up his takedowns? Well, he managed to use the same technique as a counter against an overaggressive KJ Noons. 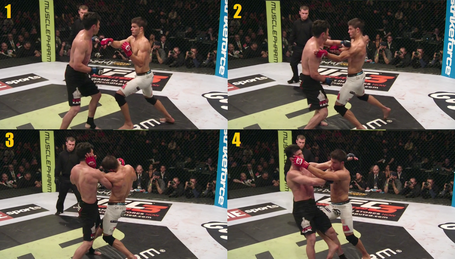 1. Thomson slaps down a jab from Noons and steps forward as Noons moves toward him.

2. Noons misses with a left hook and loads up a right uppercut. Thomson, meanwhile, is getting himself into position-note the open left hand which, just as against Melendez, he hopes to use to steer Noons right off his feet.

3. As KJ throws his uppercut, his feet become almost parallel with one another, and his hips are already perilously close to Thomson's. Josh slaps his left hand onto Noons' head and reaches out with his right leg.

4. Noons tries to step back with his left leg, but it's too late, and Thomson wheels him to canvas.

I've written before about Ben Henderson's habit of letting his feet and hips get out of position in wild exchanges. Though his opponent is a dangerous striker, it might behoove Thomson to force Bendo into this state so that he can take advantage of any lapses in concentration.

I'm a big fan of Josh Thomson's fighting style, and he is one of the most well-rounded fighters in the lightweight division. It's been some time since he's faced a dangerous kicker, and he's struggled with wrestlers before, but we've also seen Thomson hang with some of the best lightweights in the world. His plan could very well be to outstrike Ben Henderson this Saturday, but in a five round fight, it might behoove him to test out the former champion's balance, and see if he can't put together some of those brilliant transitions.

For more analysis like this as well as interviews with fighters and trainers, be sure to check out Heavy Hands, Connor's new podcast that focuses on the finer points of face-punching. Now available on both iTunes and Stitcher.