When he's not relaxing on the ranch with Leonard Garcia, Donald Cerrone is usually kicking people in the head. BE's striking specialist Connor Ruebusch breaks down Cowboy's signature technique.

His road's been a little rocky as of late, but Donald Cerrone is still undeniably one of the most exciting fighters on the UFC roster. After a dynamite start to 2011 Cowboy saw a six-fight win streak snapped in a surprisingly impressive performance from Nate Diaz. Since then, the Jackson's MMA product has been inconsistent, looking uninspired in some fights, and like his old self in others.

There's no telling which Cerrone will show up against Adriano Martins this Saturday, but you'd be hard pressed to find a fight fan that wasn't hoping for the classic version. With an aggressive kickboxing style backed up by some truly potent jiu jitsu and an underrated wrestling game, Cerrone is like his Jackson-Winkeljohn stablemate Carlos Condit in that he seems designed for thrilling fights. Unlike Condit, Cerrone packs serious power in his kicks, the best of which is his left switch kick.

In some ways the switch kick is a staple of MMA, in that we rarely see a lead-leg kick thrown without a switch or step to load it up. Rarely, however, do we see switch kicks thrown with the same speed and fluidity as in high level kickfighting. One of the best switch kicks in the world belongs to nakmuay and K1 Max legend Buakaw Banchamek (formerly Buakaw Por Pramuk).

The "switch" in a switch kick is a small "loading" step of the kicking leg, followed immediately by a forward step of the plant leg. I say "kicking leg" and "plant leg" instead of "lead" and "rear" deliberately, because as you might have noticed watching Buakaw, the switching motion can actually be done with either leg. This is where many MMA fighters seem to get confused, switching their hips to kick rather than loading up the legs-a "switch" is not so much a switch as it is the coiling of a spring. You can see this clearly in the following video of Buakaw which shows his left kick in slow motion at the end (ignore the ironic bit at the beginning).

BE's striking specialist Connor Ruebusch breaks down the best moments of technique and strategy from UFC Fight Night Atlanta. Featured in this first part of the recap: Ramsey Nijem and Cole Miller.

Anybody who's watched a Dennis Siver fight in the UFC has heard Joe Rogan talk about his vaunted left kicks, which he throws without a switch, a feat that Joe will happily tell you is not only rare in MMA, but usually only utilized by the most disciplined and powerful of Karate masters. Consequently, you might believe that the switch kick is a crutch or a sign of weakness-if he was really a good kicker, why would he need to switch before kicking? And, for many MMA fighters, you'd be right. Lots of mixed martial artists can't throw a lead leg kick without a switch... but they can't throw a decent switch kick either.

Again, note that in the first video above Buakaw does not only switch for his lead leg kicks. Buakaw switches for every kick, and every kick is just as fast and as powerful as he wants it to be. Possessing two of the most dynamic and powerful legs in kickboxing, he is certainly not incapable of kicking without a switch. So why switch at all?

The first answer is the obvious one: power. It is difficult to generate meaningful power in the lead leg, especially when kicking high, without a switch to coil the muscles of that leg and launch it into the target. Let's take a look at Cerrone's most recent (and, shockingly, only his second ever) knockout over Melvin Guillard. 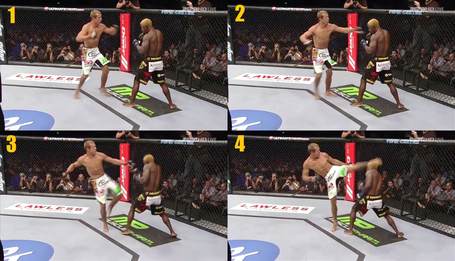 1. Cerrone has just landed a hard left low kick. Expecting that technique to still be in his opponent's mind, he begins to switch for another kick up high.

3. Cerrone plants his right foot and launches into the kick. Only now does his left hand start to retract from Guillard's face as he counter-rotates his upper body-Melvin knows that a kick is coming, but has no idea of the trajectory.

4. The slight change in range makes all the difference. Cerrone's mid-shin collides with Guillard's temple as he slips habitually to his right.

A left kick straight from Cerrone's position in Frame 1 would have been lucky to graze Guillard's chin. But by switching, Cowboy put himself in the correct range for the strike and also loaded his legs and his hips. The dynamic motion of the switch allows him to retain power in his kick even at head height, with relatively little room for wind-up compared to a rear-leg kick.

Here's an experiment for you: hold your hand outstretched, palm down, at shoulder level and try to slowly lift your leg so that your shin collides with your palm. Chances are, unless you have years of experience and very strong legs, you can't do it. Your muscles don't have the strength to lift your leg that high with control, much less with power. Now try again, but this time, spring your leg from the ground and try to swing it quickly up and through your palm. Unless you're criminally out of shape, that should have been much easier. The simple addition of momentum allowed you to go past your body's usual limits for flexibility and power. That is the principle behind dynamic stretching, and it is the same principle behind Cerrone's switch kick.

If power is the obvious reason for switching, then rhythm is the one few people think of, but it is the key to Cerrone's effectiveness with this attack. The idea is difficult to convey with still images alone, so be sure to check out the GIF after the diagram.

1. Cerrone shifts his weight from foot to foot.

2. A quick switch (not shown) leads to a quick kick to Dennis Siver's lead leg.

3. Seeing an opening, Cerrone prepares for another left kick, driving off the ball of his left foot after he brings it back. In a word, he takes his sweet time preparing the kick.

4. As he plants his right foot and lifts his leg to kick, Siver is defending. It doesn't look pretty, but this shell/check combination from the German probably would have stopped another low kick or a high kick, but neither has come yet.

5. Siver, having anticipated his own successful defense of the kick, sets his foot down, and opens up for a counter.

6. Finally Cerrone's shin connects with Siver's face, well after he expected it.

The switch kick is often derided for being slow, but it is this deliberate motion which causes opponents to mistime the incoming strike and, consequently, get hit by it. Speed is great, but speed alone is less effective than speed combined with slowness. This is called "broken rhythm," and it is a high level concept indeed. By first kicking quickly, Cerrone was able to convince Siver that his entire assault would be fast. When Siver reacted accordingly for a quick attack and, having anticipated everything, was just beginning to counter that attack, he found out the hard way that a slow strike can be just as deadly as a fast one-sometimes more so.

Cerrone's switch kick is one of the best in the game, but he is known for being a slow starter. He faces a tough veteran of Brazilian MMA in Adriano Martins this weekend and Martins, like the last three opponents to really trouble Cerrone, is a southpaw. It'll be very interesting to see whether or not Cerrone can utilize his signature attack against the exact type of opponent known to give him problems. We'll find out very soon.

For more analysis like this as well as interviews with fighters and trainers, be sure to check out Heavy Hands, Connor's new podcast that focuses on the finer points of face-punching. Now available on both iTunes and Stitcher.