The BE's Baddest MMA Greatest of All Time Tournament is done, and a champion has been crowned. Get all the details on who is MMA's GOAT, right here.

All hail the Last Emperor.

After 31 fights, weeks of intelligent debate, and hundreds of votes, one man stands proud on top of the BE's Baddest mountain. Congratulations to Fedor Emelianenko, voted by you the reader as MMA's Greatest of All Time. Fedor defeated Anderson Silva in the finals, 234-192.

Here are the round by round results that brought the belt home to Emelianenko:

Aside from the fact that his first three round opponents all earned the exact same number of votes, what is perhaps most interesting here is how very "Fedor" this win is. Fedor struggled against GSP, struggled against Silva, but in the end, he pulled out the win, just as Fedor does.

Thanks to everyone in the Bloody Elbow community for reading, commenting, and voting. We'll be back with another tournament soon to determine more of MMA's greatest, and more of BE's Baddest. 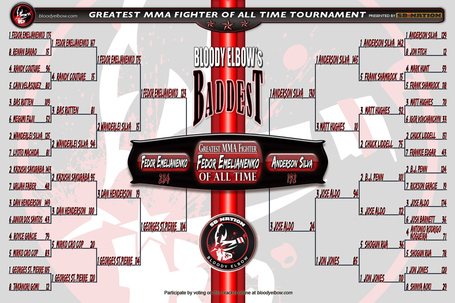 Thanks to June M. Williams for all of her great work on the brackets throughout the tournament.