Welcome to part two of the Technique Recap for UFC Fight Night Atlanta. In case you missed it, part one can be found right here. Today we're breaking down the technique and strategies of the many great strikers featured on this better-than-expected fight card. Let's get to it!

I don't care if I was wrong about the Johnson-Benavidez fight, Duane Ludwig has clearly had a massive and very positive influence on Team Alpha Male, and I for one cannot wait to see Dillashaw's next performance, which should be a title eliminator.

But first, let's take a look at the virtuosic beating TJ Dillashaw put on Mike Easton. Easton, despite having failed to put together any kind of complete game, is a solid-enough fighter with skills in every area of MMA, and I'm not sure he's ever looked as outgunned as he did against Dillashaw. TJ displayed an uncanny understanding of range and positioning for someone who, prior to MMA, had zero striking experience.

Combination striking is nothing new in MMA, but typically we see a lot of basic, thoughtless combinations. 1-2-3, 1-2-, 1-1-2, etc. These combinations are staples because they work, and there is logic behind them, but the number of times that I've seen fighters throw the same combination over and over despite its proven inefficacy boggles the mind. TJ Dillashaw unleashed some of the most adaptable, well-thought-out combos I've ever seen, changing up his strikes as the range and angle of his opponent changed. Here's a brilliant example from the very first round. 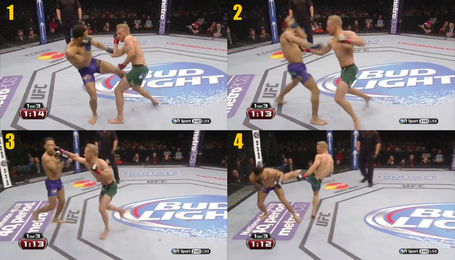 1. Dillashaw bends his knees and absorbs an inside low kick from Easton, who has stepped in too close to his opponent.

2. Dillashaw explodes into a right uppercut to the body, which stands Easton up and forces him to back up.

3. As he backs up, Dillashaw throws a right straight, clipping Easton on the jaw and hiding the footwork which puts him position to...

4. Follow up with a solid left kick, which cracks Easton in the ribs as he slips to his right.

In a single strick of fluidly connected strikes, Dillashaw moves from close, to mid, to long range. Uppercuts are becoming more and more popular in MMA, but I've never seen another fighter use one to stand the opponent up and push them back into the path of a straight punch, not to mention using that punch as an opportunity to set up and land a kick. And a left kick was an ideal choice, too, as Easton was clearly expecting a left straight, which he would have almost certainly slipped and avoided. This shows the advantage of reactive fighting over anticipatory fighting, as well. Yes, fighters should anticipate to a degree; a strike is far easier to avoid if one knows it's coming, and the likelihood of a certain strike can be determined by the positioning of the opponent. But Easton anticipated a left hand, and was wrong; Dillashaw saw a slip, and attacked accordingly. That's impressive stuff from a wrestler. The awareness necessary to adjust to split-second changes in range and angle is truly a high level skill.

1. Dillashaw throws a lead left as Easton covers up.

2. Followed by a right hook as he changes angles, which Easton rolls under.

3. As Easton fires back with a straight right of his own, Dillashaw slides just outside Easton's elbow, avoiding the blow.

4. Immediately, he counters from a perfect inside angle with a jab...

6. Finally, just as Easton turns to face him, Dillashaw exits range with a fade-away right hook.

There's something very impressive happening here. Dillashaw not only understands range, but manipulates it. Distance itself, even more so than Mike Easton, was under TJ Dillashaw's control in this fight. He strikes as he enters range, as Easton exits it, as Easton enters range, and as he himself leaves it. At no point was Dillashaw convinced to stop throwing strikes, and his movement was so exceptionally fluid that he never found himself out of position to throw back. By the end of the fight, Mike Easton was fearful to throw anything more than single strikes at Dillashaw, despite his corner's admonition that he needed the knockout to win.

Body work had a huge impact on several of the night's fights, and it's good to see body shots getting their due in MMA.

Yoel Romero had a very tough fight on his hands in Derek Brunson, whose athleticism and well-roundedness gave the Cuban standout serious trouble in the first two rounds. Brunson's hand and foot speed was a major factor in his ability to control the distance and pace of the fight, and Romero desperately needed a way to slow him down. Cue the gut-busting.

1. One thing wrestlers do well is change levels, and Romero does that brilliantly here, landing a stiff jab to Brunson's waistline.

2. He follows up with a straight left.

3. As Romero backs up, Brunson rushes him and gets stuck in a double collar tie, from which he attempts to throw some punishing uppercuts.

4. Romero has other ideas: he launches into the air, yanking Brunson down into a jump knee that lands dead center, right on his solar plexus.

5. Brunson shrugs and waves the flashy technique off.

6. This is still the most important thing to remember about this fight. Never forget.

Brunson may have denied the effect the strikes had on him, but he slowed noticeably for the rest of the fight, only stealing the remainder of the third round using a well-timed takedown and some much needed rest in top position. Even so, he failed to recover and came out slow in the first round. Brunson is a fighter who relies on his athleticism and Romero had clearly poked a hole in his gas tank with the body strikes. Brunson looked decidedly haggard as Romero broke him down on the feet and crushed him on the ground for a late third round stoppage.

Louis Smolka had similar success with body shots in his match against the more experienced Alptekin Ozkilic. "The Turkish Delight" is another fighter with a very high energy style, and Smolka seemed well prepared to mitigate that early on. Like Romero, Smolka made use of clinch knees but, lacking Romero's freakish power, he did his damage via volume.

Early on, both fighters were finding success with their striking, but not only did Ozkilic seem to be landing the harder strikes, he was taking Smolka down with ease. Fortunately for Smolka, he has an excellent, offensive guard, and managed to scramble back to his feet. The result of one such scramble:

1. Smolka sits up out of Ozkilic's weak side control, slipping out of an attempted waist lock.

2. He stands up straight into a double collar tie, immediately cocking his hips back for a knee. Ozkilic tries and fails to punch his way out.

3. Smolka spears a right knee into Smolka's guts, using his clinch to magnify the force of the strike.

4. Ozkilic resorts to desperate punches once again as Smolka loads up another knee, but the clinch is too strong.

5. Smolka drives another knee into his midsection.

6. And turns Ozkilic to land yet another knee that forces the Turk to abandon his misguided attempts to strike and attempt to tie Smolka up.

It is possible to punch effectively in the clinch, but Ozkilic failed to do so correctly, opting instead for the ever-popular "hope to knock him out before he knees me to death" method. As Chris Weidman recently proved against Anderson Silva, there are two things needed to punch effectively in the clinch. 1) Control of one's own posture. Ozkilic allowed Smolka to yank him around by the neck, and paid the price. 2) A solid stance, with sound positioning. By failing to get his feet underneath himself and his hips closer to Smolka, Ozkilic was easily squared and pulled into the multitudes of vicious knees, while failing to land any meaningful punches of his own.

In any case, Smolka used these same strikes throughout the fight, and by the third round Ozkilic, who had no difficulty taking down the Hawaiian earlier, not only failed to finish his takedowns but was taken down himself, mounted, and ate 38 consecutive punches before the end of the round, never once responding with a strike or escape attempt of his own. These two fights are proof that body shots, even when they don't finish, pay off in the later rounds, and should be invested in early.

Then again, sometimes a body shot does lead to the win in a more, shall we say, direct manner. Direct to the liver, that is.

Luke Rockhold had no difficulty whatsoever implementing his kicking game against the reach-deficient Costa Philippou in the main event, landing kicks to the legs, body, and head throughout the short first round. Finally, Rockhold finished his outmatched opponent with two accurate, clean strikes to the body.

1. Rockhold backs Philippou up against the fence. Philippou circles to Rockhold's left.

2. Luke cuts off his movement with a cross step, putting himself at an inside angle to Philippou as he launches into a kick.

3. The advantage of the inside angle is that it allows kicks to travel around the guard of the opponent (check out my breakdown of Anthony Pettis' kicking game for more). That's definitely the case here, as Rockhold's kick sneaks just behind the elbow of Philippou, cracking him in the liver.

4. Now Philippou, hurt from the kick, shells up and tries to circle the other way. Rockhold freezes him with a stiff jab, bringing his hands up and disrupting his movement.

5. Immediately Rockhold steps into another kick, this time moving to the outside of Philippou's lead foot.

6. Philippou swats desperately at the kick, possibly expecting it to go the head, and the strike once again slips right under his elbow, Rockhold's instep making paté out of his liver.

Body shots, solid straight punches, and advanced combinations at all ranges? I don't know about you, but I feel we're on the cusp of a new era in MMA striking, and I couldn't be more excited. I hope you enjoyed this edition of the Tech Recap. Stay tuned in the coming weeks for my analysis of the many great fights on the upcoming UFC on Fox card, which features a critical lightweight matchup between former UFC champ Benson Henderson and former Strikeforce champ Josh Thomson.

For more analysis like this, as well as interviews with fighters and coaches, be sure to check out
Heavy Hands, Connor's new podcast that focuses on the finer points of face-punching. Now available on both iTunes and Stitcher.