UFC Fight Night 35: Luke Rockhold talks about the night a girl tried to fight him

UFC Midlleweight contender, Luke Rockhold discusses his upcoming bout with Philippou, where he feels skillset lines up with current champion, Chris Weidman, getting to a healthier weight cut and how he once fended off an aggressive female while wearing pink, zebra striped tights.

Share All sharing options for: UFC Fight Night 35: Luke Rockhold talks about the night a girl tried to fight him

The one year anniversary of the Strikeforce merger's completion is this week, and as a sort of memorial to it, we are being treated to a UFC Fight Night featuring one of its talented standout fighters in the main event. Former Strikeforce Middleweight champion, Luke Rockhold will be squaring off against the super tough, Costa Philippou in a fight that will most likely see the cogs and gears line up to begin a contender eliminator for a title shot.

In a recent interview with Bloody Elbow, Rockhold discussed his upcoming bout with Philippou, where he feels skillset lines up with current champion, Chris Weidman, getting to a healthier weight cut and how he once fended off an aggressive female while wearing pink, zebra striped tights. Here's what he had to say:

He's definitely more of a traditional boxer. He's got a real tight stance, and throws lots of crosses and power hooks with a lot of 1-2s. He's going to be looking to throw that right hand, I'm sure. I'm just going to play my range and make him try to close the distance. I can fight on the outside and still fight my fight. For him to fight his, he's got to close the gap and get in there.

If he wants to force me up against the cage and try and make this an ugly fight, I can get ugly. I've got good wrestling and judo, and I work with some of the biggest strongest guys in MMA. I'm used to that and I'm ready for it. That's a bad scenario for him. I welcome him to try to clinch me or take me down or make it ugly. His best bet is to play the distance and try to find some shots by being technical. I believe I'm just better than anyone he's fought.

The Takeaway From The Belfort Fight

I've just got to stay with my gameplan. My focus on that fight was to move forward and weather that first round. From there it would have been about taking him down and wearing his muscles out. He's real explosive in the first round, everyone knows that, especially in Brazil. I was worried about his hand speed and his boxing. Once I saw him come in and exchange, and I hit him a couple times, I sort of relaxed, and that's when he came with the kick. Yeah, what I took from that fight is that I definitely need to stick to my gameplan.

I'd definitely say that I've trained too hard or over trained in the past, especially since I'm in the gym with these big, strong wrestlers. I think I ended up getting a little too big to keep up with them. When I fought Jacare, I was walking a bit lighter, so the cut was easier. My last fight I was walking around 203, and I was going to bed at that, maybe even more. This time around, I'm a couple pounds lighter, and I've really been controlling my nutrition. I think the key is staying lighter so I can be faster.

The weight cut is a huge factor, so you've got to be smart about it. Sometimes you want to rehydrate too much after weigh-ins. You want to gorge yourself, and that can slow you down. I'm just trying to do this smarter. I'm cutting less so everything ends up working better.

The most important thing is rehydrating, obviously. I like to get a Pedialyte, but I water it down to half water, half Pedialyte. I sip that for a while, because you don't want to just pound the water. Sometimes, you want to eat fast while you're drinking, but that's a problem. I stay with liquid hydration until I take my first piss, then I worry about getting some food in me. Generally, I do a smoothie, or something light that's easily absorbed.

After that, I like to have a steak. A filet mignon or something nice and clean. Not too big a steak, but a decent portion. I've always had a steak before all my major competitions or fights. I incorporate other stuff to help it digest quickly, though. I have a big salad and I eat papaya with it so the enzymes can assist in breaking it down for absorption.

I definitely don't want to eat too much because that will make you sluggish. I remember when I fought Jessy Taylor, I ordered a big ribeye after weigh-ins, and someone else ordered a big mud pie (decadent chocolate ice cream pie). I ended up eating half of that pie by myself [laughs]. Ice cream cakes and pies are definitely a weakness of mine.

It's hard to say. I think we're both really well rounded guys. His wrestling is definitely his strong suit. I haven't actually trained with him. He's a good friend of mine, but we've never trained. My jiu-jitsu game might be a little better than his. We've both got things we're probably stronger than the other at. You never know until you get in there, but I'm very confident in myself. 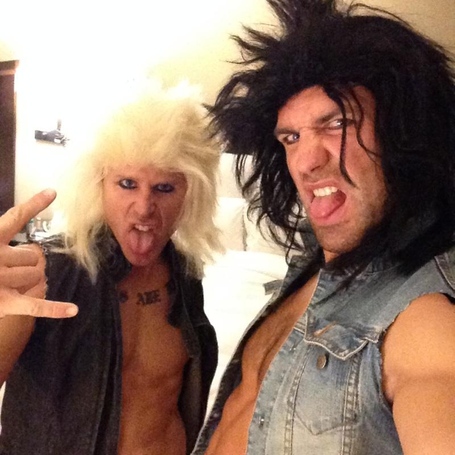 The Night A Girl Tried To Fight Me

This past Halloween, I went up to the city and met up with Jake Shields and some other friends. A girl we were with convinced us to go in by the marina where there was this little college town. So we're there, partying a little bit and hanging out. Now I'm in tights and a wig and makeup, like a full on 80's hair band rocker. I was doing it right [laughs].

So I've got on my pink, zebra striped tights, and we go outside. Jake knows some girl that's out there, and she's pretty drunk and just an aggressive girl. I guess she trains at one of the gyms he's at or something. She started giving Jake shit, so I started giving her some shit too. It wasn't malicious. We were clowning around.

Out of nowhere, she punches me in the gut. I start dancing around her, Muhammad Ali style, and she gets more aggressive, trying to land on me. She managed to slap me and landed a pretty hard kick, but I had been drinking too, so I just kept dancing around, just out of range. She then squares off, very serious, like we're going to fight. I thought I'd continue to play around, so I wiped my nose and bounced around a little bit more. She clicked into mode and wanted to fight for real.

She started swinging and kicking...I didn't know what to think at that point. She was trying to take my head off. She was crazy. Everyone came out of the bar to watch this dude in pink tights trying to avoid getting cracked by this crazy girl. There was no stopping her, so we decided to run away [laughs]. We ended up catching a cab up the block. She was in kill mode [laughs], so we had to get the Hell out of there.