Once one of the hottest middleweight prospects in the world, Luke Rockhold suffered a brutal knockout at the hands of Vitor Belfort in his last fight. Now he seeks to redeem himself against Costa Philippou. BE's striking specialist Connor Ruebusch breaks down the set ups that led to the knockout.

The last time I wrote about Luke Rockhold, the former Strikeforce middleweight champ was set to make his UFC debut against the resurgent Vitor Belfort. In that article, I expressed concern over Rockhold's tendency to lose his feet on the attack, and was pleased to see that he seemed to have shored this hole up somewhat against the Phenom. Unfortunately for Rockhold, Belfort emphatically revealed another flaw in his game with a wheel kick to the jaw and a series of brutal follow-up punches.

First, let's look at Rockhold's improvements. A quick side-by-side comparison of his pre-UFC stance and the one he employed against Belfort should tell us what he worked on between his final title defense and his first UFC bout. 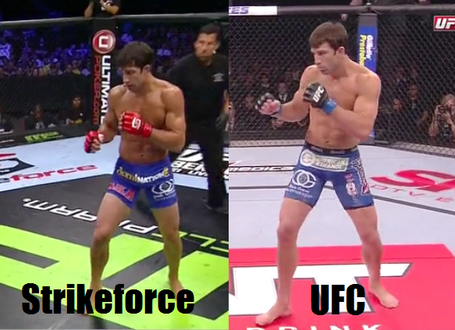 Though at first glance these images may appear all but identical, I see a number of small but promising changes. First, notice the slight cant of Rockhold's shoulders in the UFC image, compared to the flat line of his shoulders in Strikeforce. Rockhold's posture is quite good in both images, but the tilt of his shoulders indicates a slight fold of the rear (left) hip, which both takes his head a few inches away from the center line, and lifts his lead shoulder to cover more of his jawline.

At UFC 155, Costa Philippou TKO'd Tim Boetsch after blinding one of his eyes with a dubious eye poke. BE's striking specialist Connor Ruebusch takes a look at the incident and examines the history of fouls in combat sports.

In the Strikeforce image Rockhold's weight is centered evenly between his legs. Some prefer this weight orientation for purposes of mobility and the firing of quicker, if weaker, strikes from either side of the body. Personally, I prefer the rear leg orientation demonstrated by Rockhold in the UFC image. With his head pulled back closer to his rear leg, Rockhold is afforded a better view of his opponent's body, and a few precious extra inches of distance between his opponent and his chin, which means a few split seconds more to adapt, defend, and counter effectively.

Despite these changes, Rockhold looked lost during much of his short bout with Belfort. Unfortunately, despite the cleaning up of his technical deficiencies, Rockhold did not come equipped with the right strategy to stop a killing machine like Vitor.

In fact, the following will read like an MMA version of Run Lola Run: one set up, four different outcomes. 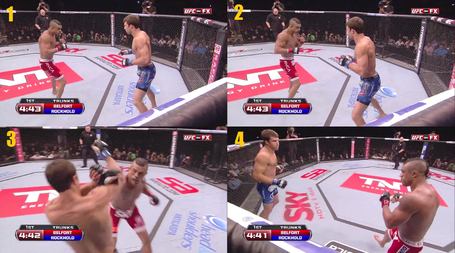 1. Seconds into the fight, Rockhold stands up from a slip and backs up to the fence as Vitor approaches.

2. Cautious, Rockhold moves along the fence to his left, away from Belfort's left hand and leg.

4. Rockhold continues to circle along the fence, and both fighters reset.

From the beginning two things were clear: 1) Vitor would not be relying on a thoughtless early blitz as many suggested before the fight, and 2) Rockhold was determined to move either straight back, or to his left, away from Vitor's deadly power hand. 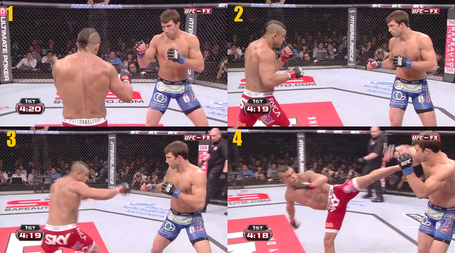 1. Rockhold circles to Vitor's right, waiting for an opening but doing nothing to create one.

2. Responding to a feint, Rockhold backs up and stands tall.

3. Belfort engages before Rockhold can fully reset as expected. Again, his attack begins with a right hook, though this one is a mere suggestion-a fake intended to disguise his real attack...

4. ...which takes the form of a left wheel kick. Rockhold backs straight up for two steps before finding himself against the fence once again, but Vitor does not rush him.

At this point Rockhold, having been pressured for most of the fight, attempted his hand at applying some pressure to Belfort. 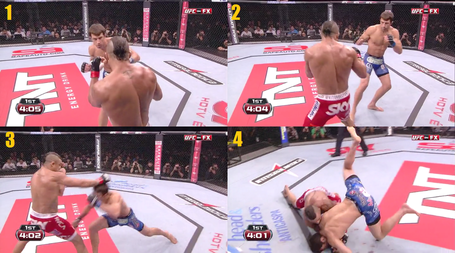 2. And then back to his left. This movement suggests different attacks, such as a right hook from the right hip, or a left straight from the left hip.

3. Now Rockhold shifts to his right hip again and shoots for a quick takedown, reaching for Belfort's lead right leg.

4. Vitor sprawls hard on his left hip, slamming Rockhold head-first into the canvas and taking his right leg out of danger.

I like the feints from Rockhold, but he committed a crucial error very common among mixed martial artists. At no point in this fight did Rockhold establish a simple jab. Nor did he establish a right hook, or a left straight. Rather, the former Strikeforce champ relied on a multitude of feints that were, unsurprisingly, ineffective because at no point was Belfort given a reason to fear these feints. Without proof that Rockhold is dangerous, for example, when his weight is on his lead hip, why would Vitor do anything but wait and watch for Rockhold's real attack? As a result, the Brazilian had no trouble whatsoever in creating space, changing levels, and sprawling on Rockhold's takedown attempt.

Now, back once again to our repeating sequence. As Vitor went back on the offensive, he returned to his lead right hook, a weapon that he not only feinted, but threw with actual ill intent. 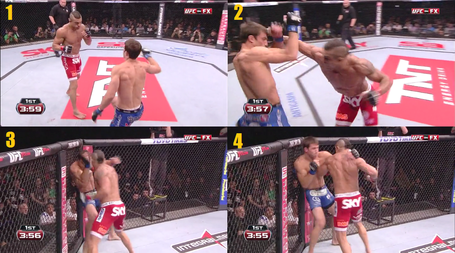 1. After failing on his takedown attempt, Rockhold struggles to his feet, his body language that of a man pressed, and pressed he is as Belfort stalks toward him.

2. Rockhold, once again, circles left along the fence and Belfort, once again, leads with his long right hook.

3. Rockhold ends up in the same place as before, except this time Belfort follows him, corralling him with a right hook that lands clean.

4. Followed by a short left uppercut.

Rockhold managed to clinch up with the shorter Belfort and stymie his combinations, and once again both fighters reset. By now you should see the pattern clear as day: Rockhold, one way or another, finds himself close to the fence with Belfort controlling the center of the Octagon. Belfort uses his right hook to close the distance and land power shots with his left hand. Finally, in the next sequence, we see Rockhold begin to adapt, but it is too late. 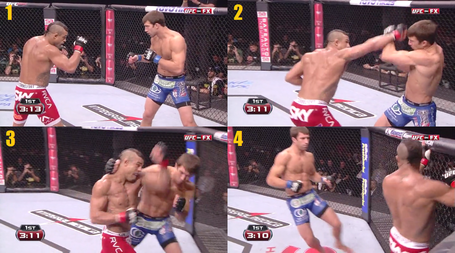 1. Rockhold stands with the fence at his back. He seems aware that he cannot back up any further, and waits on Vitor to strike.

2. The Brazilian obliges him with yet another right hook, which Rockhold catches on his left forearm.

3. As Vitor attempts to follow through with an uppercut, Rockhold clubs him in the back of the neck with a counter right hook, pivoting as he throws it.

4. His cocksure skipping away in this frame looks oddly like a fancy little click of the heels. Hm.

That right hook was the best thing Rockhold showed in the entire fight, not promising as it didn't even land cleanly. Still, moving to the outside of Vitor's left as he moved straight forward, rather than getting stuck with his back to the fence and circling into a perpetual barrage of right hooks was a marked improvement.

The problem in this approach was that Vitor was clearly a few steps ahead of Luke by this point. Already he had determined that Rockhold was content to stand with his back to the fence. Typically he moved to his left, doing nothing but defending, though he had now attempted to counter and move the opposite direction. In any case, Belfort knew that he was safe to lead with his right hook and take a guess at Rockhold's intentions, particularly because, in every sequence up to this point, Rockhold had dealt with the right hook before doing anything else. That meant a brief window of opportunity in which to make the set up work. 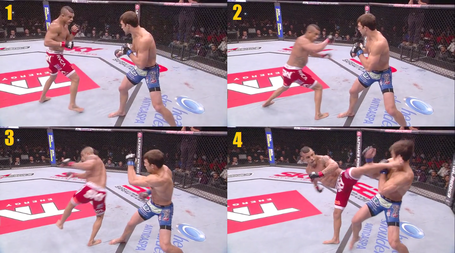 1. Rockhold waits for Belfort to pounce once again.

2. Vitor steps forward, drops his weight, and reaches out with his right arm. To Luke Rockhold, this looks exactly like the same right hook that had begun every other combination.

3. Therefore, Rockhold attempted the same block as before, reaching with his left forearm to catch Vitor's hook. It's impossible to say, but the lowered position of Rockhold's right fist in this frame suggests that he is loading up for another counter right hook.

4. Rockhold realizes too late that Vitor is spinning, not punching, and attempts desperately to cover his jaw with his hands, but Belfort's heel collides with his jaw well before he has time to block.

Rockhold is young in the fight game, and has already shown marked improvement over the course of his short 12-fight career. Though unpolished, there is no reason to believe that he won't come into his fight with Costa Philippou showing some kind of improvement. My hope is that he and his camp have made steps to improve the subtle aspects of boxing that, up to this point, Rockhold seems to have ignored. Rockhold possesses a variety of spinning kicks and creative attacks, and that's all well and good, but the lack of simple punching combinations and footwork means that he'll always struggle to implement those tools against truly high-level competition.

If Luke needs any further proof that the fundamentals determine the fight, then he should not focus on Belfort's spectacular wheel kick, but rather the simple right hook that enabled it to work.