At UFC 155, Costa Philippou TKO'd Tim Boetsch after blinding one of his eyes with a dubious eye poke. BE's striking specialist Connor Ruebusch takes a look at the incident and examines the history of fouls in combat sports.

This might be the strangest Judo Chop I've ever done.

Combat sports are meant to replicate the realities of fighting in a controlled situation. It's right in the name. A professional bout is combat in a very real way, but it is also sport: the fight is competitive in nature, and limited by rules for the safety of the competitors. Breaking one of these rules results in a foul, which doesn't heal any damage done to the fouled party, but creates a preemptive incentive to stay within the rules. At least, that's how things are supposed to work.

In reality, fouls are doled out by referees who, even at their best, are imperfect humans with imperfect vision and a very limited insight into the intentions of the fighters. In addition many referees are, shall we say, too forgiving of the potential fouls of the competitors. And accidents do happen, so it's not entirely a mistake to give a fighter the benefit of the doubt. Still, any serious fight fan could name at least one fighter with a reputation as a fouler-someone who seems to deal at least on low blow, headbutt, or rabbit punch per fight. I won't name any names, but I'm sure you'll find quite the dirty fighter lineup in the comments before too long.

No foul is more notorious in MMA than the eyepoke, and it is the one foul that, aside from some very rare instances in grappling competitions, is unique to MMA among all combat sports. However, it hasn't always been that way. Consider the boxing glove.

This is a pair of standard, modern-style boxing gloves. 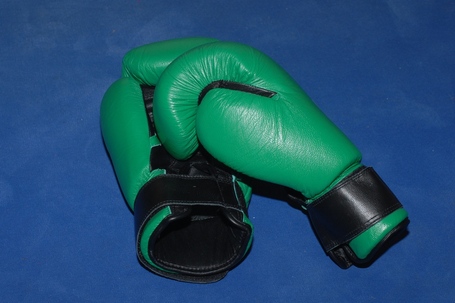 Modern boxing gloves force the thumb to lie alongside the fingers, rather than folded across the knuckles as is done when punching bare fisted. The thumb is entirely immobilized, being fixed in this position with a few stitches or a connecting piece of leather.

Despite some claims to the contrary, boxing gloves exist to protect the hands of the puncher more than the brain of the opponent. And yet modern gloves prevent the boxer from moving his thumb to a more anatomically sound position, potentially increasing the chances for a boxer to injure his thumb. Why might that be, you ask?

Well, in the old days boxing gloves looked like this: 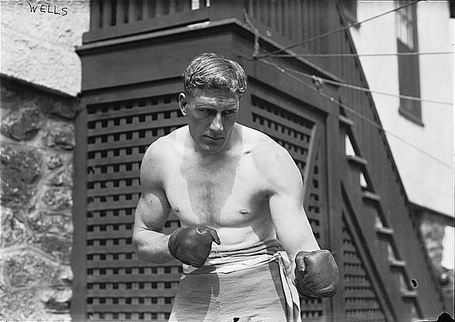 Turn-of-the-century boxers had free use of their thumbs, and were more able to form a tight, anatomically sound fist. Unfortunately, they were also able to deliberately thumb each other in the eye, and they did so with gusto, hence the redesigned equipment.

Thus we come to Constantinos "Costa" Philippou, who tomorrow faces former Strikeforce middleweight champion Luke Rockhold, a much needed opportunity for both men to retain divisional relevance. Fans will remember how, two fights ago, Costa won a drawn out TKO over Tim Boetsch in a bout that, for Boetsch, was a seemingly endless series of unfortunate events. A broken hand in the first round prompted Boetsch to focus on closing the distance with Philippou and pursuing the takedown. In his first effort of round two he received a nasty gash on the forehead after a clash of heads with Philippou, which did indeed appear to be incidental. Then, as if things couldn't get worse for the Barbarian, Philippou dealt him a nasty eye poke. 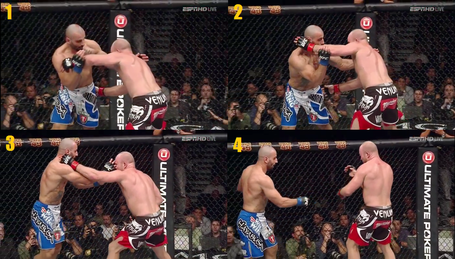 1. Boetsch, fueled by Barbarian bloodlust, charges in for a takedown with Philippou's back to the fence.

2. Philippou keeps Boetsch away from his hips by posting his left hand on Boetsch's shoulder, and cups his right hand under Boetsch's outstretched left arm.

3. Instead of pushing Boetsch's arm past and sliding out of range, or cupping under the Barbarian's armpit to gain a leverage advantage, Philippou slips his hand inside of Boetch's arm and "pushes" against his face, driving his ring finger into Tim's eye.

Of course, everything looks intentional in a freeze frame, but the GIF doesn't do much to assert Philippou's innocence. A close look at the rest of the fight reveals several other instances wherein Philippou's extended fingers were placed perilously close to Tim Boetsch's eyes. 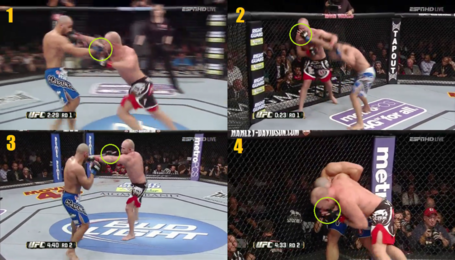 1. Boetsch lunges in with a combination of punches; Costa sticks an open hand in his face.

2. Boetsch roughs his opponent up in the clinch; Costa sticks an open hand in his face.

3. Boetsch jabs (with a closed fist) from range; Costa sticks an open hand in his face.

4. Boetsch works for a takedown; Costa rakes his open hand across Boetsch's face.

To my knowledge, Philippou has never been known as a dirty fighter. The Boetsch fight stands alone as the only example of Philippou sticking his fingers in the eyes of his opponent, though the images do give the impression that this was deliberate. Granted, in his next bout, a loss to Francis Carmont, Philippou didn't get near his opponent's eyes. But Carmont, unlike Boetsch, didn't exactly give him any opportunities; his takedowns were so well timed that Philippou couldn't even react to stop them, and indeed failed to stuff a single one of the Frenchman's GSP-esque tackles.

Before facing Boetsch, Philippou received a truly nasty eye poke at the hands-er, fingers of Riki Fukuda. The referee, as could be expected, quickly ruled the poke accidental. The pain was so intense that Philippou cried out, even while being examined by the doctor, and took nearly the full five minutes to recover before admirably finishing the bout. Philippou even admitted after the fight that he thought he had lost his eye, so bad was the poke. And just one fight later, he did the same thing to Tim Boetsch.

Now is it assuming too much to suggest that, after feeling firsthand the fight-changing effects of an eye poke, Philippou immediately made them a part of his arsenal? Is it a product of confirmation bias that a second viewing of Philippou's fight with Boetsch reveals a number of near-pokes very similar to the one that, in part, led to Philippou's win over his first top ten opponent? Perhaps.

The truth is that, without stricter refereeing, eye pokes are and will continue to be a very real part of the sport of MMA. We use the word "professional" to denote someone who does something cleanly and well, but in reality it means that they do it for money. We must remember that, for many fighters, this is their livelihood. Each fight could make or break them-put food on their table or take it away. So who are we to call them dishonorable for exploiting a hole in the rules that very few officials make any effort to close up?

In boxing, there is a concept called "gamesmanship." This is a polite term for "dirty fighting." Many fighters are renowned for their use of these tactics. In fact, there is a certain respect given to "game" veterans who understand how to bend the rules and hide subtle fouls from the referee, by holding the opponent and punching him in the kidney where the referee can't see, or cleverly letting his head or elbow collide with the opponent's jaw after a missed punch.

Look, my favorite fighter in the world is called Bernard Hopkins because he is an extremely dirty fighter. . . He hits you with the elbows. He hits you here in the thighs. He hits you over here. . . If the referee changes to this side, he grabs them from here and hits them. He is a sensational guy, his technique, his age, apart from being very smart. That [guy] is my idol.

These tactics are technically forbidden, but they are also part of the game of boxing, and sometimes playing the game means breaking the rules.

Maybe the idea of a fingernail colliding with an open eye is too visceral for MMA fans to ever respect its use as a tactic, but as MMA fighters realize the continued reluctance of referees to deduct points, we are certain to see many more "accidental" fouls at the highest levels of this sport.