Part two of the week's Technique Recap covers the best moments of technique from Chad Mendes vs. Clay Guida, Anthony Pettis vs. Ben Henderson, and Glover Teixeira vs. Ryan Bader.

Time for Part Two, folks. This time we're covering two of the bigger fights at UFC 164, Mendes vs. Guida and Pettis vs. Henderson. And after that we'll look at the interesting but brief clash between Ryan Bader and Glover Teixeira.

Didn't catch Part One? Check it out.

Yep, another lesson on posture taught to us by featherweights Clay Guida and Chad Mendes. Mendes has shown some remarkable improvement in his striking ability, and clearly possesses effortless power in his hands. Clay Guida does not have powerful hands, but he is a handful. His erratic movement and unpredictable attack make him a difficult opponent to time and, when he's actually in the mood to fight, defend against.

So it's no surprise that Guida had never been knocked out-until Mendes laid hands on him at UFC 164.

Mendes' striking showed great poise, as he remained balanced over his feet at all times, even while throwing powerful combinations. He also proved very difficult to hit cleanly, and we can attribute that to his posture. Back straight, shoulders pulled back, even while punching. 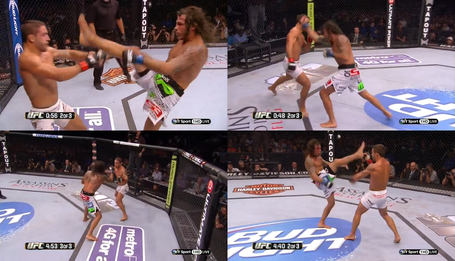 Mendes had no difficulty in avoiding Guida's uppercuts and the front kicks he started to throw in round two. Guida, on the other hand, was caught over and over by Mendes' own upward strikes. When Guida dodges and punches, his chest caves as his shoulders hunch, and he curls his back. Mendes proved to be more than happy to punish him for this technical error. 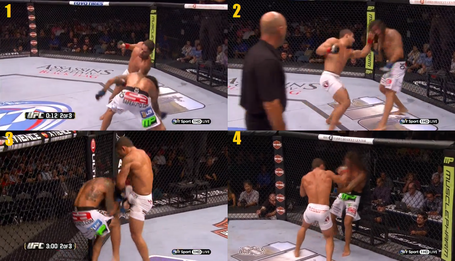 The balance with which Chad strikes is impressive. He rarely overextends, and his weight transfers very nicely from side to side. The pair of hooks that finished Guida were both pulled through the target, i.e. Guida's jaw, with poised ferocity. (GIF)

Shout out to Duane Ludwig, whose corner advice was refreshingly insightful. While legendary coach Greg Jackson was instructing his fighter to use special hidden moves with funny code names ("Green murphy! Belt buckle, belt buckle!"), Ludwig was instructing his fighter to keep his feet under him and pointing out that Guida was responding to feints and overextending himself. Ludwig has really turned out to be a huge boon to Team Alpha Male, and looks to become one of the best coaches in MMA.

Most would agree that telegraphing strikes is a bad thing. For those unfamiliar with the term, to telegraph means to give the opponent a clear impression that you are about to attack. A shrugged shoulder might indicate a jab. A lifted elbow is a dead giveaway that a cross is coming. Whatever the particulars, it's obviously bad to let the opponent know what you're going to do, right?

Well... There is a use for telegraphs. Unintentionally done, yes, they'll let the opponent know your intentions almost as soon as you do. But say you were to telegraph a strike and then throw a different one? Then you've used your opponent's savviness to re-seize the initiative yourself. This is exactly what Anthony Pettis did to Ben Henderson. Check out this massive string of beautifully mixed strikes and feints. 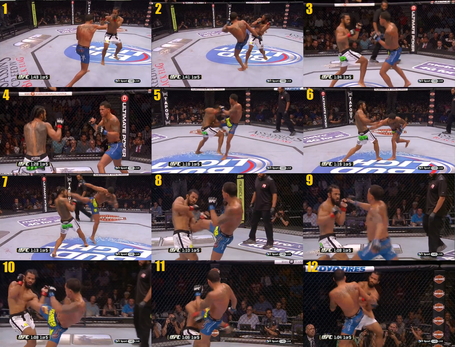 1. Pettis throws away a right hand, faking the punch to test Henderson's reaction. Ben raises his elbows and hands to block the punch.

2. Pettis throws the right body kick, his wind-up motion mimicking the right hand he faked before. Henderson again tries to block the right hand, and the kick slips right under his elbow.

3. Pettis feints the kick this time, and Ben prepares to cross check.

4. A subtle feint with the hips, Machida-style. Ben does not react.

5. Pettis throws a vicious body kick. Bendo tries to counter, but is thrown back a good two feet by the force of the blow.

6. To keep the champ thinking "body," Pettis follows up with another straight right, this one to the breadbasket.

7. Now another kick, the telegraph once again mimicking a straight right. This one goes high, and Henderson just barely blocks it.

8. Now that he's ready for another high kick, Pettis goes to the body again.

11. And another one as he tries to go for a takedown.

This is really masterful work by Pettis, and the result is that, for nearly a straight minute on the feet, he completely stole the initiative from the champ. Henderson was so caught up trying to react properly to Pettis' rib-crushing kicks that he mustered no offense of his own. It wasn't until Bendo tried a cut-kick of his own to counter a Pettis cartwheel kick that he finally managed to counter the challenger in a meaningful way. And then Pettis armbarred him.

Feints and telegraphs are quite similar, and can be interchangeable. It's not always prudent to keep the opponent from predicting your strike when you can instead let them predict incorrectly and land a truly punishing, fully committed blow.

Ben Henderson deserves serious respect for taking all of those body kicks-the same kicks that absolutely destroyed Donald Cerrone-without showing so much as a grimace. But in the end the strikes did their work all the same.

Let me say this: Ryan Bader has never impressed me. I know that will upset some (one) of you, but it's the truth. However, Ryan Bader impressed me at UFN 28. He handily outstruck Glover Teixeira for two minutes, stunning the big Brazilian twice with punches. He showed a nice jab and impressive movement for such a muscle-bound man. He seemed to forget that he was ostensibly the superior wrestler, but he seemed set to prove that he was the superior boxer.

Just before the end of the fight, Bader landed a nice counter, so surprisingly quick that the commentators completely missed it. 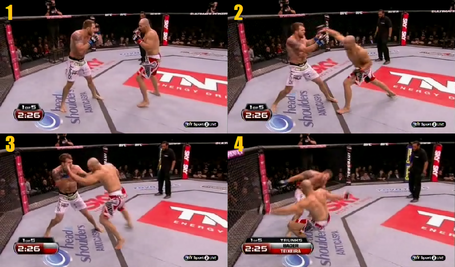 1. Teixeira steps in. This is the bad kind of telegraph, because it's pretty clear he's about to step off-line to throw a right hand.

3. And lands a nice left hook over the top of Teixeira's overextended punch.

4. Teixeira's legs buckle, and Bader moves off to an angle.

Was his footwork incredible? Absolutely not. Where he could have pivoted and thrown his hook in one motion, Bader throw the hook, planted his feet, and then awkwardly weaved to his left. But the movement served its purpose well. He moved away from Teixeira's follow-up punch and, had Teixeira not been hurt, would have forced him to turn to keep up with him as he moved. This is the essence of stick and move, and Bader did it pretty well.

Flash forward a few seconds, and Bader has registered that his opponent is hurt. He swarms Teixeira against the fence. 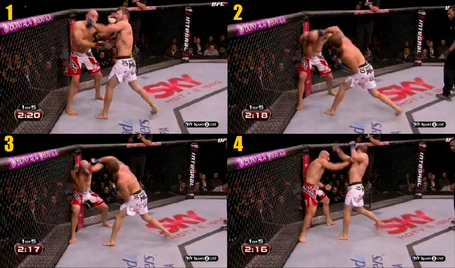 1. Bader stands Teixeira up with a hard right uppercut.

2. A wild overhand right follows, catching Teixeira behind the ear.

4. Bader tries for an uppercut this time, feet still in the same place, and gets countered hard.

The finish comes shortly after, Teixeira dropping Bader with a follow-up left hook and diving on him to pulverize his head with brutal hammerfists. (GIF)

Bader fought a surprisingly good fight against Teixeira, but his downfall was largely of his own doing. Once he had Glover hurt, he elected to abandon his strategy of striking and moving to angles in favor of simply winging punches from his right side over and over. The first right hand is pretty solid, but no punch follows it. Bader tries to replicate the success of the punch with another just like it, but Teixeira is prepared now, and Bader does absolutely nothing different with the strike to differ it from the first one. It's the same swinging, high-elbowed punch. It's thrown from the exact same place. It also has no combination following it. Finally Bader decides to mix things up with an uppercut, but by this time it's too late. Glover is prepared for another right-handed punch, and slips as he throws his own right.

This sequence is a microcosm. In the space of fifteen seconds Bader goes from sticking and moving to throwing predictable punches with no movement whatsoever.

The lesson? Even a hurt opponent is dangerous. Putting a man's back to the ropes or fence is a good start, but it's still possible to swing with your back to the wall. Once the opponent is cornered, it's wise to move to an angle as you continue to attack.

I'll leave you with this GIF of Canelo Alvarez knocking the life out of Josesito Lopez. Though Lopez is against the ropes and hurt almost immediately, Canelo still moves subtly to his right as he goes for the kill.

...now who's in the mood for some boxing?

If you're in the mood for more analysis from Connor, except delivered by his sultry voice instead of his confusing writing style, then check out the new podcast Heavy Hands, which debuted Tuesday. Connor and friend Corey break down Machida vs. Davis, Overeem vs. Browne, and Matt Browne. Available on iTunes soon, new episode coming Tuesday (featuring Luis Monda).