It's time for another post-event Technique Recap, and this time Connor breaks down the finer points of several fights, including Thompson vs. Clements, Barao vs. Wineland, and of course Jones vs. Gustafsson.

I was going to start this post with the words "another week, another UFC event," but that would be a disservice to the spectacle we all witnessed on Saturday. That, my friends, was no typical UFC event. The prelims were (mostly) very exciting, and the main card featured a series of fights that were either exciting decisions or quick finishes. Okay, so the Carmont fight wasn't exciting, per se. But it was a lot better than Dana White would have you believe. It was also about 100 times better than Jury vs. Ricci, a.k.a. the Soviet East Germany of fights: both exceedingly dull and exceedingly ugly.

And who cares, because Jon Jones vs. Alexander Gustafsson happened. The whole card could have been garbage and that fight alone would have saved it.

Best of all, there were tons of little technical details that got a technique geekTM like myself all riled up to do a post-event breakdown. So let's cut to the chase, starting with...

If I had to use one word to describe the early prelims of UFC 165, I would go with "footwork." As much as striking fans like myself are wont to complain about the level of striking in MMA (and yeah, there's some of that further down in this article), there were three fighters who really showed off some solid footwork in the prelims.

First was the enigmatic Alex Caceres, who just keeps getting better an better. Whereas Caceres used to spend all of his time on the feet bouncing around and throwing Kung Fu kicks, this time around he put his quick feet to better use, finding angles and landing punches on a thoroughly outclassed Roland Delorme.

Just like Michael Johnson against Joe Lauzon, Caceres used his southpaw jab to keep Delorme at range and threaten his center line, and then he took perfect advantage of that typical outside angle, not only stepping his right foot to the outside of Delorme's left, but turning to face him as he did so, connecting with beautiful uppercut on the break (GIF). He is in perfect position in the GIF. And below you can see the same sequence broken down into frames (admittedly, it's not the best angle). 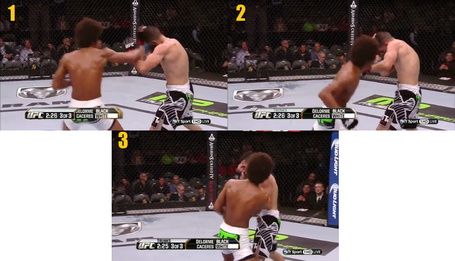 1. Caceres leads with a right hook.

2. Then he takes a big step to the outside of Delorme's left foot and lands a left hand.

3. Finally, a short right uppercut that slips under Delorme's left armpit and catches him on the chin.

John Makdessi got a quick finish thanks to his use of the inside angle against Renee Forte, pulling and stepping back to his left to avoid a right hand, and then countering with a right hand of his own (GIF). 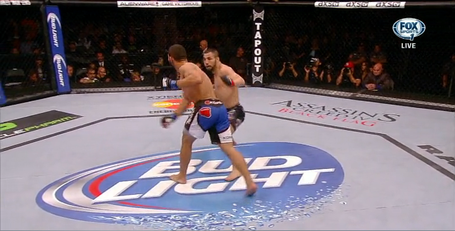 Check out the position of Makdessi's lead foot just before he throws his counter right hand: pointed right at Forte's center line, poised to strike.  By side-stepping Makdessi was able to make Forte over-commit and miss entirely. As Forte's momentum carries him past, Makdessi is able to line his body up perfectly for his counter punch.

But the most impressive striking performance of the night (up until the main event battle, anyway) was that of Stephen Thompson. I already broke down the slick spinning sweep kick that his opponent, Chris Clements, hit in the first round, but other than that brief hiccup Thompson was in complete control of this fight, using angles on both offense and defense like never before.

This GIF, for example, shows us Thompson cutting to an angle as he moves backward, immediately taking advantage of the position as Clements is forced to turn to keep up with him. I often use the word "securing" when talking about angles, but in reality there is no secure angle. The best one can hope for is to keep the opponent reacting, always following you rather than leading, and to catch them while they struggle to lock on.

Both of the knockdowns in the second round, as well, saw Thompson using angular footwork effectively (GIF). Even after landing the shot that put Clements on the world's slowest pair of skates (GIF), Thompson was exiting range on a different trajectory from which he'd entered. 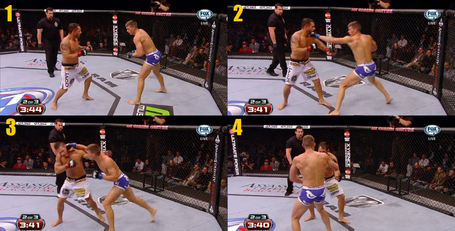 2. Clements throws a half-committed jab (though I disagree on the whole, this is the reason that the great Jack Dempsey advises against throwing actual punches without the intention to hurt) and Thompson pulls back, following up with a counter jab.

3. Next the right hand over Clements' shoulder and into the base of his jaw.

4. Thompson brings his right foot forward on the right hand and then turns, exiting range in a southpaw stance at about a 90º angle to his original entry.

At the risk of spewing some truly Joe Rogan-esque hyperbole, Thompson looks Mayweather-esque here. He sacrifices some good form on the right hand, bringing his head past his feet, putting his feet out of position, etc. But he sacrifices those things at the cost of speed, and it pays off in a big way.

I felt great about picking Eddie Wineland to outstrike and outwrestle Renan Barao, and then suddenly I felt a little sick. And then my mind was blown when I realized what had happened. Barao slept Wineland with one of the most brutal, and most rarely seen kicks: the spinning back kick to the face.

What was most impressive about Barao's kick, though, is how he set it up. Enjoy this extended GIF of the finish, and take note of what happens in the seconds prior to the kick being thrown. Eddie Wineland has good head movement and strong counters, and Barao knows that. So, as he and Wineland are engaged in a jabbing, feeling out process, Renan catches a jab and then counters with a feeler jab of his own, which Eddie slips to the outside.

Then Wineland sees Barao jab agai-nope: spinning back kick to the teeth. Notice how the wind-up motion of the kick sends Barao's lead hand forward in exactly the fashion of a jab, and Wineland ends up slipping right into the kick. The thing is, he could have conceivably slipped a spinning back kick thrown at the place where his head was, but Barao was clearly setting him up with his feints because the kick was thrown almost perfectly at the spot where Wineland's head ended up.

I'd also like to mention hand position (yes, again) while we're on this fight. In round one, Joe Rogan did his thing and began to talk about what a poor decision it was for Eddie Wineland to carry his hands low.

"The thing about Wineland's style... he keeps his head straight up. He doesn't keep his hands up either, but he's been successful with this style. He takes a very good shot, but if you were going to teach a fighter how to strike that's not how you would do it. He's been very successful with it because of his strength, because of his ability to absorb punishment, his speed..."

Out of nowhere, Mike Goldberg showed some alarming prescience and suggested to Joe the real reason why Wineland's style might be so effective, even without a high guard. "Footwork," he said, simply.

And Rogan just brushed him off! "Yeah..." Well okay Joe. I just want to point out the position of Wineland's hands as he was knocked out by Barao's stunning kick.

Well of course I have to cover this fight. There were so many things that both fighters did well, and so many things that went wrong for either guy. It was a truly competitive, back-and-forth fight, and we were all lucky to be able to witness it live, most of us experiencing genuine shock at the unexpected early success of the Swede. Not only did Gustafsson take Jones down for the first time in his career, but he convincingly won the boxing portion of the fight, using a quick jab to set Jones up for numerous power shots to the head and body.

How did he do it?

Well, it turns out Jon Jones really doesn't know how to box with somebody. Like this GIF, for example. Jones is completely square to Gustafsson and eats a jab. Since it moves a little quickly, it's worth breaking down in picture format. 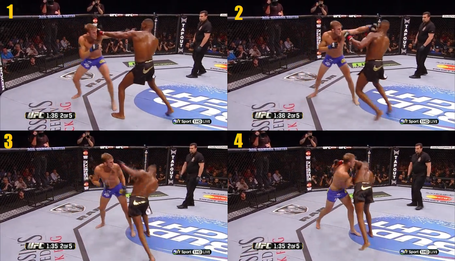 1. Jones steps forward with a jab and, circling, Gustafsson slips it and pops the champ's head back with a jab of his own.

2. And another, this one putting Gus in range for a right hand. Jones' feet are now completely out of position-he's at a very bad angle.

3. Jones makes the bizarre decision to step across Gustafsson's body, rather than pivoting away or simply switching to southpaw and stepping back.

4. Gustafsson nearly takes Jones' back as he tries desperately to get out of punching range, though Jones does manage to stifle Gus' right uppercut.

This is one of many opportunities for Gustafsson fans to lament their hero's love of the right uppercut, because he often throws it when another strike would work far better. A straight right, for example, immediately after the second jab, would have been perfect.

But I digress. The most important thing to take away from this exchange is Jones' lack of comfort in the pocket. Once Gustafsson begins encroaching on Jones' space, he starts making strange, dangerous decisions to avoid the punches, turning away (as he also did here), closing his eyes, moving the wrong direction to avoid blows. These all speak to one conclusion: Jon Jones is not comfortable with an opponent who can stand in range and box him. He's not comfortable exchanging punches period, it turns out, especially with someone who can and will throw combinations. Despite the fact that, when he does keep his cool and maintain his position, he is capable of shutting down even Gustafsson with strikes like this: GIF. His inability to do so consistently is just a huge defensive hole that needs shoring up.

Well, I hope you enjoyed this Technique Recap. Join me again here at Bloody Elbow after UFN 29: Maia vs. Shields for another edition, and if you have any suggestions for fights or fighters you want to see covered, hit me up on Twitter @ConnorRuebusch. Until next time!

If you're interested in more analysis of Jones vs. Gustafsson and the particulars of striking defense, check out Connor's new podcast Heavy Hands.