Asian MMA Update: Shinya Aoki drops to 145 lbs at ONE FC 11, Suzuki vs. Kayoom for welterweight title at ONE FC 12

On the latest round up of Asian MMA news, Shinya Aoki has his first featherweight title fight booked as part of the ONE FC 11 card this October, ONE FC 12 is made official with a welterweight title bout announced, PXC books a bout between a URCC and a Pancrase champion, and Dare hypes up their return.

Share All sharing options for: Asian MMA Update: Shinya Aoki drops to 145 lbs at ONE FC 11, Suzuki vs. Kayoom for welterweight title at ONE FC 12

ONE FC 11: Total Domination happens in Singapore this October, and will be headlined by a bantamweight title unification bout between Bibiano Fernandes and Soo Chul Kim. They already have arguably the best non-UFC bantamweight gun for the promotion's title, but now the line up gets even better with the addition of Japanese star Shinya Aoki.

The 'Tobikan Judan', who has recently made a successful test cut along with a permanent move to Singapore, will be testing the featherweight waters on the card. We have yet to see how the move will affect his performance, but having fought as high as welterweight, and standing at 5'11, Aoki will likely be one of the bigger fighters in the division. Set to welcome him to 145 lbs, is a relatively unknown American fighter in Cody Stevens (11-5-1).

Now fighting out of Tiger Muay Thai, Stevens is a wrestling-based fighter who has won a few regional titles in the United States. He has been rounding up his MMA game in Thailand and has won his last two bouts, but he will be taking a huge step up in competition, and will surely have an uphill climb as he looks to spoil Aoki's coming out party.

Also added to the card according to the Evolve MMA camp, Shinya's teammate Mitch Chilson will take on Shannon Wiratchai in a rematch of their ONE FC 5 bout. Their first fight ended in controversy, as it was held back when the promotion still had their confusing "open attack" rule instead of the free-for-all soccer kicks that are allowed today.

Check out the current fight card so far:

After their 11th show wraps up in Singapore, ONE Fighting Championship heads back to Kuala Lumpur, Malaysia in less than a month. Headlining the show will be the inaugural welterweight title fight between Japanese knock out artist Nobutatsu Suzuki, and a hometown star in Adam Kayoom, who is a Muay Thai champ and BJJ Blackbelt.

Having a record of 10-1 with every single win coming by knockout, Suzuki is known for possessing massive power and a Karate-based background. Kayoom on the other hand is just 4-1 in MMA so far, but he already has a win over Gregor Gracie, and has gained quite a reputation in Asia from his extensive background in both Muay Thai and BJJ.

The event dubbed as "Warrior Spirit" happens on November 15, and while no other bouts have been announced for the card, this headliner definitely would be a very entertaining match up with the promotion's first welterweight title on the line.

WILL CHOPE SIGNS WITH PXC, SET TO FACE TAKUMI NAKAYAMA IN GUAM 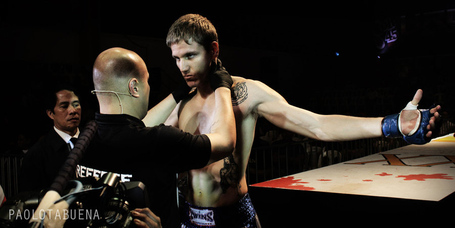 Known as 'the tallest featherweight in the world', Will Chope (18-5) has decided to drop his URCC Interim Featherweight Title to sign with their rival promotion, Pacific X-Treme Combat. This lanky yet talented prospect has racked up an impressive 13-fight win streak and will have a tough task for his PXC debut as he takes on decorated grappler and current featherweight King of Pancrase, Takumi Nakayama (18-13-6).

The bout happens at PXC 40 in Guam this October, a card headlined by a bantamweight title fight between Guamanian challenger Kyle Aguon (6-3), and the fighter many consider as Japan's top young prospect in Michinori Tanaka (8-0).

As we wrote about earlier, Ole Laursen will make his return on October 12 and he will be moving up in weight to take on a fellow heavy hitter in Joe Ray. They will be fighting on the Dare banner in Thailand, a country which now supports MMA after outlawing it on the past couple of years. Check out these fantastic promo vides where the duo has been talking up their fight in what is easily one of the most unique MMA promotions in the world in Dare Fight Sports: