For UFC 165 Jon Jones is finally being given another actual light heavyweight contender, and this is his most physically imposing opponent yet. Connor breaks down why height might not actually be as important as it seems, and how Jones and Gustafsson can maximize their advantages this Saturday.

Unfortunately, this leaves the UFC with a problem. Gustafsson might be the most legitimate contender currently available, but he's not exactly well known. We're far from Mighty Mouse vs. Jim Moriga (sp?) levels of un-hype here, but Gustafsson definitely lacks the name recognition of any of Bones' prior title challengers. So what does the UFC do?

Of course, they market the fight almost entirely on the premise that this is the first challenger to compare with Jones' outrageous height and reach. I'm actually fine with this. Height and reach are certainly a huge part of his success (though Stefan Struve will tell you that those factors alone don't mean much), and Gustafsson certainly does stack up better than anyone else in this department. According to the UFC's often iffy stats, Gustafsson stands an inch taller than Jones, and with a 76.5 inch wingspan, only loses 7.5 inches to Jones' legendary 84 inch reach. That's the smallest reach difference in a Jon Jones fight since Brandon Vera, with Gustafsson barely edging out Shogun Rua's 76 inch monkey arms.

So reach and height. All these guys should have to do is see who can stand higher on their tippy-toes and let the bombs fly, right? Fight tall, isn't that what Joe Rogan's always saying? Hey, what's this video?

Yep. That's boxing trainer Kenny Weldon explaining that there is no advantage to fighting tall, at least in the way that Joe Rogan and so many others see it.

Not only does lowering elevation increase one's reach, but it grants the lowered fighter a huge physical advantage-that of leverage. Often the most effective strikes are ones that catch an opponent from underneath. Hard straight punches that move at an upward trajectory are absolutely killer, and of course leverage is crucial when it comes to wrestling. Let's examine this notion by looking at this weekend's big competitors.

Lots of fighters stand up tall as they move backwards. Both Jones and Gustafsson have shown a tendency to do this in the past. This is a mistake. Without the knees bent, the body is less coiled to absorb any strikes that get through. It's also simple physics: it takes less effort to knock over a foot-long dowel standing on its end than it does one half the height. 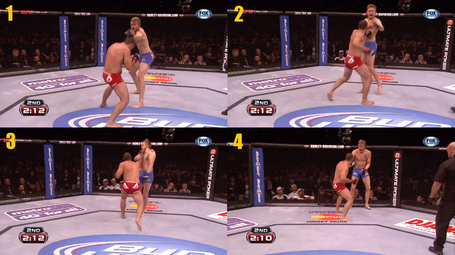 1. Gustafsson steps in behind a jab. He bends his knees as he does so, but not much.

2. Shogun shifts forward and lands a huge left hook to the jaw of Gustafsson.

4. Now Gustafsson finds himself with his back against the cage, both feet parallel, legs practically unbent. The right hand that Shogun throws after this frame misses more by chance than by any design of the Swede's.

This is worrisome stuff from Gustafsson. It's clear in the very first frame that he sees the counter coming, and he has already started moving away when the first shot lands. The problem is that he doesn't have effective set reactions to his opponent's aggression. If they fail to close the distance, like Thiago Silva did, then he looks great, but when they succeed, like Mr. Rua here, his defense is revealed to be incredibly porous.

Gustafsson obviously has a great chin, but his immediate reaction to pressure is to back straight away from it (note how he moves back at least ten feet without the slightest change in angle) and stand up tall, leaning back to avoid getting hurt. An aggressive opponent (or one with, say, 84 inches of reach) will be able to catch him on the retreat, and once Gustafsson leans back so far and takes a shot, the only other direction to go is down.

So what about Jon Jones? Well, Bones has shown a tendency to back straight up in past fights, but he has been steadily improving in that regard since Rampage. It was heartening to hear Greg Jackson's corner advice during Jones' last fight against a legitimate light heavyweight contender, Rashad Evans. Of course there was the usual "hands up" and so on, but most importantly, Jackson repeatedly urged Jones to bend his knees. 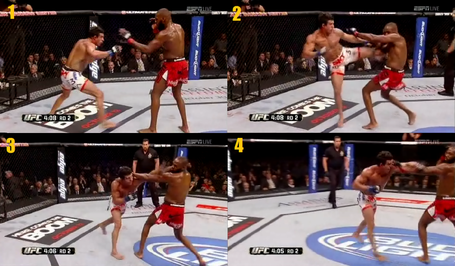 1. Jones stands tall in kicking range just as Vitor begins to step in for a head kick.

2. As he lifts his arm to block the kick, Jon bends his knees. As Vitor gets on his toes mid-kick, Jones sinks down, so that Vitor momentarily appears taller than the champ.

3. Jon moves back into kicking range, but Vitor lunges at him again, this time with a left hand. Once again the knees are bent.

4. And Jones maintains his elevation as he hop steps backward, beginning to circle as he moves.

This is far from perfect defense here. Jones has a disconcerting tendency to rely on a "universal defense" (read my Alistair Overeem breakdown for more on this). Basically, he lowers his elevation, extends his lead hand to keep his opponent from closing in, throws up a high block with his right, and circles away. He does this every time he feels threatened. This leads me to believe that Jon Jones isn't particularly good at reading opponents, but he has only been doing this punching and kicking thing for five years, so that's understandable.

What matters is that he does have some semblance of defense on the feet, something that Alexander Gustafsson seemed to really lack, even in his most recent fight, against a much more limited striker than Jones.

A note before moving on: Gustafsson has been criticized a lot for the placement of his hands. Namely, during the Shogun fight his low guard was blamed for the fact that he kept eating Shogun's telegraphed overhand right, as well as the fact that he often drops his opposite hand when he punches. Let me explain the error in this line of thought with a metaphor.

A man wants to get from one town to another. He could go around the long way, but it would be easier to take the direct route. There's just one problem: the direct route goes right through an active warzone. Regardless, he decides to make a bee-line for his destination, cutting right through the battlefield. He also decides not to wear a bullet-proof vest. Unsurprisingly, he gets shot and dies.

Now, would you say that the reason this man got shot was the fact that he wasn't wearing a bullet-proof vest? Of course not. Sure, the vest might have helped him survive the warzone, but the bigger problem is that he was walking through a warzone in the first place.

Gustafsson frequently attacks without a dominant angle, tries to counter without angling or adjusting range, and moves backward in straight lines standing bolt upright. I find it hard to blame his lowered right hand for his defensive liabilities, even though that hand might do something to stop a punch getting through (a mere raised hand is a less-than-bullet-proof vest, in any case). And just to emphasize the relative unimportance of hand position, note that Gustafsson's left hand was quite high in the first image above, and yet he ate a clean right hand.

In this GIF, Gustafsson's left hand is not the problem. His failure to manage range and angles is.

Gustafsson once again falls a little flat here when it comes to elevation changes. His level only ever drops incidentally when he widens his stance to step forward and attack. To contrast, Jon Jones is constantly playing with elevation, constantly presenting different threats to his opponents.

1-2. Twice Jones feints a single leg attempt while lowering himself.

3. Jones goes from standing tall in a Thai-like kicking stance to sinking into a wider, lower position-he's threatening the side kick he's been throwing against Vitor all night.

4. Jones shifts to his lead hip and moves forward, head at least three inches lower than Vitor's despite the fact that Jones is the taller man by far.

5-6. Jones fakes a punch to the body or a takedown attempt to disguise the footwork for his spinning elbow (he used the same setup against Jake O'Brien: GIF) (and Andre Gusmao: GIF).

Jon Jones is basically a highly evolved version of every wrestler who has ever found success with his hands. The threat of his takedowns is enough to keep his opponents tentative, and he uses this gunshy reaction to his advantage. What's more is that Jones is well aware of his effect on opponents. He understands and readily takes advantage of the various threats on his adversary's mind by constantly threatening different attacks and then capitalizing on their reactions, or lack thereof.

I don't mean to get too down on Alexander Gustafsson. I think he's a tough guy with moments of brilliance. His footwork has improved over time (he's no longer the fighter who ate dozens of punches from Matt Hamill), and he has incorporated an effective jab into his game, which is worlds better than the endless lead right uppercuts he used to throw.

Still, for a striker he does not possess the stylistic complexity of a fighter like Jon Jones, who somehow keeps improving in every aspect of the MMA game. Keep an eye on both fighters this weekend and notice how each of them uses his height. I guarantee that Jon Jones will be changing levels, putting himself in strong positions under Gustafsson's center of gravity and baiting him to come in by standing up tall. By fighting long rather than tall, Jones will open up countless opportunities to get under Gustafsson's hips and catch him with punches and takedowns.

We'll have to see if Gustafsson has made any improvements to his own tall guy faults during his long layoff.