Video, Results, and Recap for PXC 39, which saw Jang Yong Kim upset Mark Striegl, tapping him out with a seldom used leg scissor choke to claim the PXC Featherweight Championship.

PXC 39 was hosted last night in the Philippines, and BloodyElbow.com was on deck at the packed Ynares Sports Arena for all the action. Headlining the card was a fantastic match up between Filipino-American star Mark Striegl and Korean Top Team Product Jang Yong Kim, for the vacant PXC featherweight championship.

The bout was a highly entertaining back and forth match up fight that was mostly contested on the ground. For majority of his 4-year MMA career, that has been known as Striegl's domain, but the Korean surprised many onlookers as he went tit-for-tat on the ground and more than held his own. The constant and highly aggressive exchanges and reversals on the ground kept the crowd roaring, but in the end, the local star eventually succumbed to the Korean prospect. 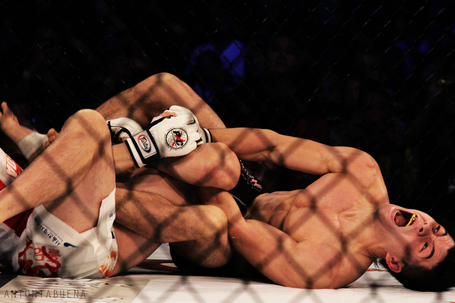 The talented wrestler in Striegl landed multiple takedowns early and threatened with a couple of submissions of his own, but the gritty Korean powered through and started wearing down Striegl after a grueling ground battle. Kim was constantly attacked with his patented Kimura - Leg Scissor Choke submission, and while Striegl survived most of these attempts early, the exchanges and near-submissions took a toll on him as the fight wore on.

Kim was able to capitalize on this during the third round, landing hard shots on a visually worn down Striegl before setting up his favorite submission chain yet again, and this time, securing a rarely seen finish from a leg scissor choke.

Immediately following the tap, Hyun Gyu Lim and the rest of the KTT cornermen went on a frenzy, jumping over the cage and charging towards their teammate to celebrate the impressive upset which won him the PXC featherweight title.

Prior to the fight, Striegl ran through several talented MMA champions from different organizations leading to a lot of talk about being a prime candidate for a UFC slot on the planned 2014 event in Manila. It looks like those dreams will have to wait for a bit for now as he drops to 12-1 after being handed his first loss of his young MMA career. The 25-year-old Filipino star still has some time to grow with this learning experience though as he looks to get back on the horse and fulfill that great potential he has shown so far.

Kim on the other hand, improves his highly misleading record to 7-5. He has now won 4 of his past 5, adding another another quality win to his resume that already includes impressive wins over Strikeforce and UFC vets like Harris Sarmiento and Keita Nakamura.

Check out the video of the event below. For those who want to go straight to the main event, skip to the 1:50:00 mark.