Here’s a woman, that some have called the female Fedor (and I agree with that term), that was 19-0 before getting the call to go on over to Bellator.

She got her first TKO victory in her debut. Then, dispatched of two WMMA mainstays, via armbar in Lisa Ellis, former Invicta atomweight title challenger and now Invicta champ, Carla Esparza.

She lost her first controversial split decision to Zoila Frausto in the tourney finals. I maintain, I agree with the decision. Megumi had the wrong gameplan trying to strike with Zoila, in my opinion. Zoila won, that’s fine. But, it’s utter bullshit, that she couldn’t make the weight again.

So, in my eyes, Megumi was still undefeated. She goes back home to Japan adds 3 more victories, then Bellator 69. In some random ass Casino, I assume, in Louisiana distributed live on the prestigious MTV2 network came the first encounter with Aguilar.

They both definitely won one round a piece, but if there ever was an MMA god that wasn’t a complete asshole, Megumi would have been given that 1st round. But, a decent to good armbar submission attempt wasn’t enough to beat lay on top wrestling.

I digress. This rematch will set the record straight hopefully. Okay, this decision wasn’t as bullshit as Machida/Shogun 1, but good lord, please have a decisive finish. There can’t be questions who is the number 1 in a division. I want Megumi to win obviously, but if Aguilar can dominate, good on her, and good for the division.

Megumi looked shaky and had a slower reaction time in her last fight at Vale Tudo Japan 2012 against Mei Yamaguchi. And this fight with Aguilar scares me. I’ll maintain my stance that Megumi is the best 115lb fighter in the world right now, but Aguilar might very well spoil the retirement of a legend. 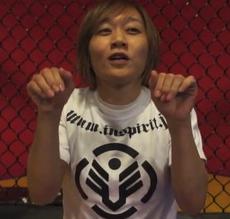